Obama, you're no Machiavelli 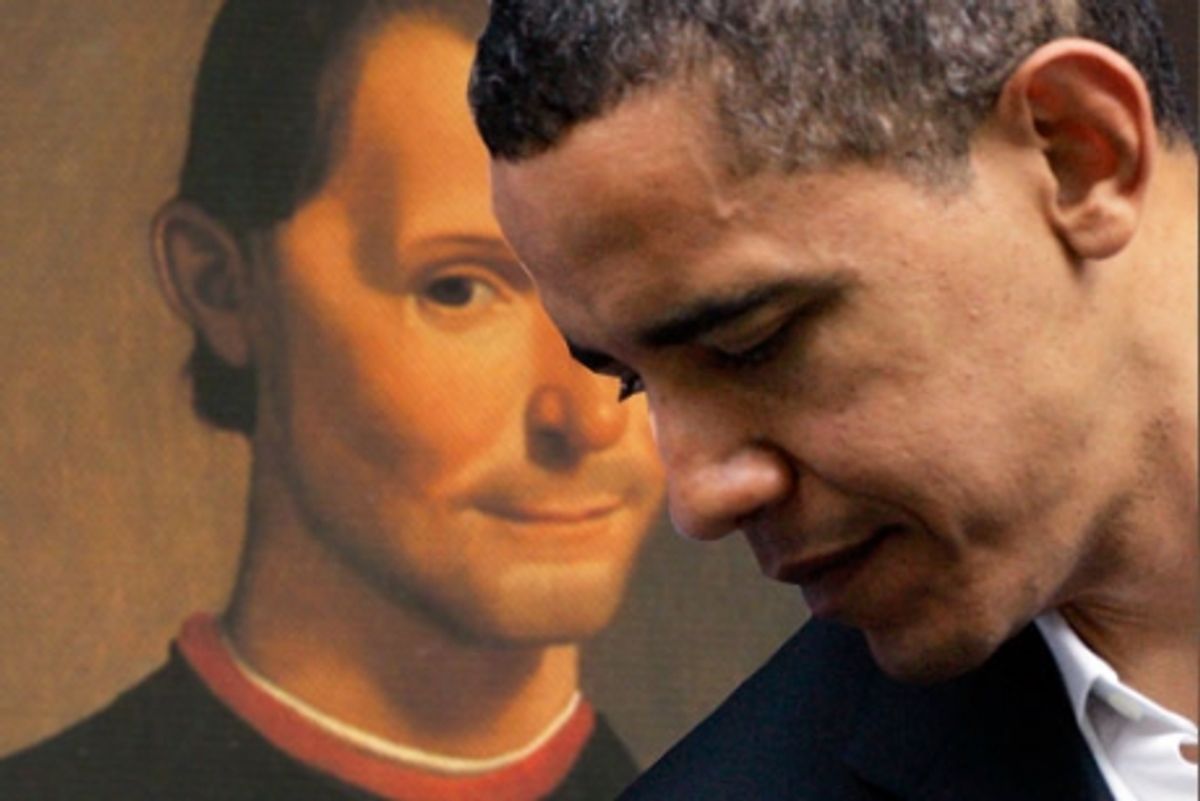 To judge from his faltering campaign for healthcare reform, President Obama, well-read as he is, appears to have neglected to read Machiavelli. If he had done so, the American president would have learned this from the Florentine statesman and philosopher in "The Prince":

"It must be considered that there is nothing more difficult to carry out, nor more doubtful of success, nor more dangerous to handle, than to initiate a new order of things. For the reformer has enemies in all those who profit by the old order, and only lukewarm defenders in all those who would profit by the new order, this lukewarmness arising partly from fear of their adversaries, who have the laws in their favor; and partly from the incredulity of mankind, who do not truly believe in anything new until they have had actual experience of it. Thus it arises that on every opportunity for attacking the reformer, his opponents do so with the zeal of partisans, the others only defend him half-heartedly, so that between them he runs great danger."

"For the reformer has enemies in all those who profit by the old order ..." Machiavelli's observation is particularly apt in the case of healthcare. The American healthcare system costs nearly twice as much as the average among similar industrial democracies, and yet overall it does not provide better care. American doctors make more money than doctors in similar societies; American drug companies gouge American consumers, in order to make up money lost in other countries where governments control drug prices; and private insurance and hospital and doctors' office bureaucracies consume other resources. For this very reason, the groups that contribute to the problem -- the medical profession, the pharmaceutical industry and the private insurance industry -- have every incentive to spend enormous sums to bribe or intimidate politicians and mislead the public in order to continue extracting their even more enormous rents from their fellow Americans.

" ... and only lukewarm defenders in all those who would profit by the new order ..." Here, too, Machiavelli's observations could not be more apposite. The Obama administration and the Democratic majority in Congress claim that most Americans who are now covered by employer-provided health insurance would be better off in the long run as a result of Democratic reforms. Universal coverage must come first, and cost reductions can come later. The political problem arises from the fact that only a minority of people in the U.S. lack employer health insurance. As in the 1990s, the majority of insured Americans are more concerned about rising deductibles than about universal coverage. However, cost reductions as a result of measures like comparing effective treatments are likely to manifest themselves only in the long run, rather than in the near future. The insured majority are thus being asked to support a reform that will chiefly benefit the non-insured minority in the short run, in the hope that maybe in the long run their own costs will go down -- maybe. Small wonder that not only many Democratic voters but their elected Democratic representatives have been "lukewarm" at best in supporting reform.

" ... and partly from the incredulity of mankind, who do not truly believe in anything new until they have had actual experience of it." Machiavelli's second kind of "lukewarmness" is also evident in the debate over healthcare. The Republicans defeated the Clinton healthcare reform by making the case that, as bad as American healthcare might be now, the alternative might be even worse. That strategy worked once before; why not again? Particularly in the midst of the greatest economic downturn since the Depression, people are risk-averse when it comes to the trade-off between risking benefits that exist and going for possible gains. In the words of the children's rhyme by Hilaire Belloc, "It's always best to cling to Nurse/ For fear of finding something worse."

In addition to exploiting one kind of "incredulity" -- disbelief that change will be better -- many conservatives shamelessly have exploited the incredulity and ignorance of poorly informed voters, who are being told that the Democratic plan will lead to euthanasia for the elderly and the disabled. It is no defense of these vile tactics to observe that the Democrats have made themselves vulnerable to wild conspiracy theories by not being completely candid about healthcare.

The president and the congressional Democrats have claimed that we can cover every American, allow people who want to keep their employer-provided insurance to do so, not raise taxes on the vast majority of Americans, not ration healthcare and cut costs. This cannot possibly be true. According to the CBO, the plan in its present form would cost more than a trillion dollars over a decade. An extra hundred billion a year for real healthcare reform could be a bargain, but let's not pretend that any significant reform can be revenue-neutral.

Progressive supporters of a public option are being less than candid when they claim that a public plan will not put private insurance out of business -- when in fact their not-so-secret hope is that over time the public plan will grow into universal single-payer by putting private insurance out of business. If not, why is the left so supportive of the public plan? A supporter of single-payer, I have no problem with the goal, but instead of trying to sneak the seed of single-payer in by stealth, proponents ought to make the case on its merits. Crude pseudo-Machiavellianism based on misdirection is likely to backfire. (In "The Prince," Machiavelli -- a small-r republican who preferred the many to the elites -- says that the best leaders are those whose reputations for virtue and honesty are actually justified.)

In short, by claiming all gain and no pain -- no rationing of any kind, no middle-class tax increases, no limits on doctor choice, no price controls, no seed of single-payer -- the Democrats have created an LBJ-like "credibility gap." Just as the discrepancy between the Johnson administration's pretext for escalation in Vietnam and its actual strategic motives created a gap that was quickly filled by conspiracy theories, so the gap between the promises of the Democrats and the reality of hard trade-offs has opened a door to false and revolting conspiracy theories, like Sarah Palin's claim that under the Democratic plan her Down syndrome child might have been euthanized.

If Machiavelli were around today, he would not give the Obama administration and the Democratic Congress high marks for Machiavellianism. Indeed, the wily Florentine probably would have been stunned by the fact that the Obama administration and the Democratic congressional leadership announced a schedule for passing the Democratic healthcare plan before there was a Democratic healthcare plan. The Renaissance equivalent would have been an agreement by Florentine conspirators to set a date certain for overthrowing the Medici tyrants, and deciding only later how to do it and whom to include. Right now the evolving Democratic healthcare bill consists of different versions that are not understood either by most defenders or most opponents. Democrats insist that we need to hurry up and pass whatever-it-is, while Republicans are against whatever-it-is, sight unseen.

But while he might have been surprised by the willingness of the Obama administration to campaign for a plan that is not even finished, Machiavelli would not have been surprised that healthcare reformers for the second time in a generation have underestimated the difficulty of reform. The Democrats must hope that Machiavelli's words in "The Prince" are not an epitaph for the latest attempt to provide universal healthcare: "Thus it arises that on every opportunity for attacking the reformer, his opponents do so with the zeal of partisans, the others only defend him half-heartedly, so that between them he runs great danger."