Ladies: I'm not your gay boyfriend

Are the ties that bind gay men to straight women beginning to fray? 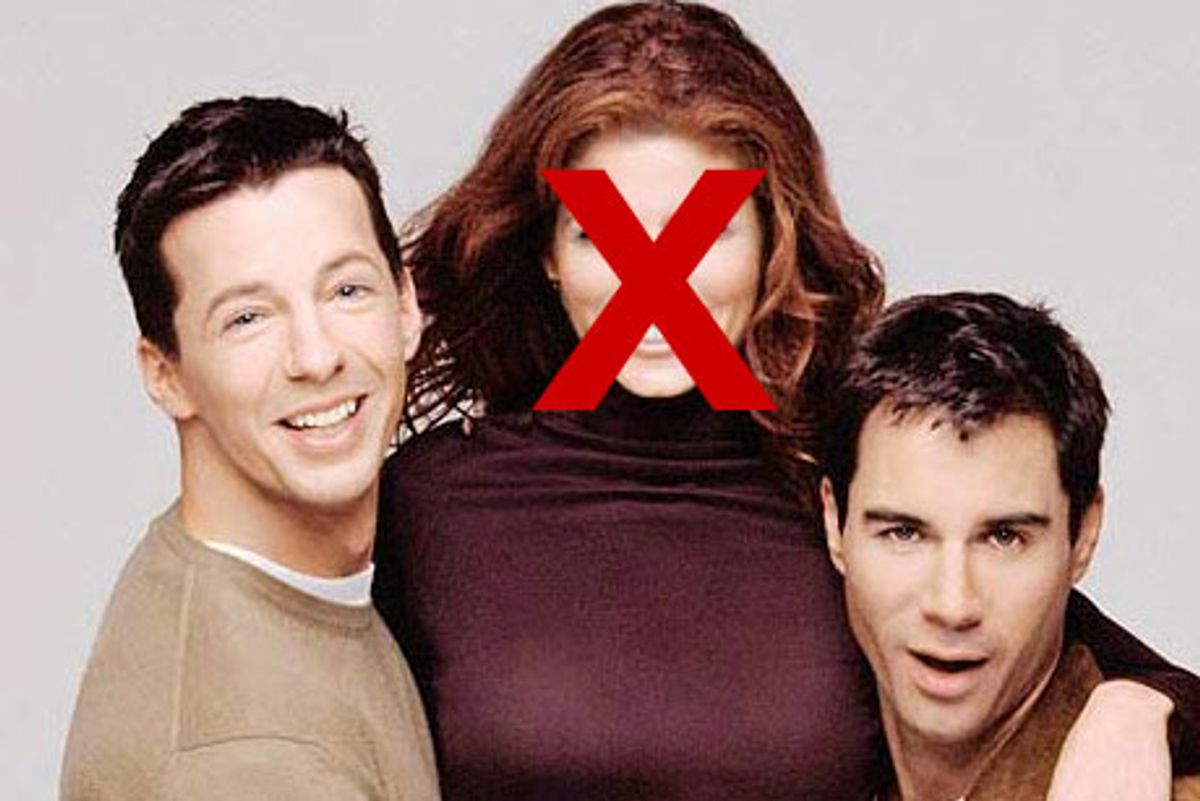 The first time somebody wanted to be my fag hag, it was the year 2000, I was 16 years old, and I was sitting in the back of a high school physics class. A fun South Asian girl to whom I'd recently admitted I was a "flaming homosexual" was chatting with me about her boy problems, and, at some point, the discussion veered onto familiar territory: "Will & Grace," the hit NBC show about a gay man living with his straight female friend. I don't remember much of the conversation. I do remember the following: She told me that she was going to be the "Grace" to my "Will," and then uttered the words that would haunt me for years to come, "I want to be your fag hag."

Of the many gifts that "Will & Grace" bestowed upon my generation of gay men -- increased visibility, cultural cachet, a naive understanding of New York apartment sizes -- one of the most significant was the popularization of the fag hag (a term the show's buttoned-down characters were too demure to even utter on air). The sitcom made being a gay man with a  female best friend seem pretty darn fun. Will and Grace had a fabulous Upper West Side apartment. They had dinner parties, and screwball banter, and sassy, sassy friends. Their life was a series of hilarious pratfalls.

But the neutered gay characters on the show were about as sexual as a pastel-colored cardigan, and in the decade since the show first aired, the fag and his hag have become a tired trope everywhere from "Sex and the City" (Carrie and her queeny sidekick Stanford) to "The Real Housewives of Atlanta" (NeNe Leakes and her "gay boyfriend"). It's turned what was once a special relationship between two cultural outsiders -- gay men and the straight women who love them -- into an eye-rolling cliché. It also turned me and other young gay men into something unexpected: a must-have item.

But as a hot commodity, I was a total disappointment. Where most of the gay men on-screen were sharp-tongued, urbane and fashionable, I was jockish, pop-culturally illiterate and dressed in mom jeans. Shopping gave me panic attacks. Most of my close friends smelled vaguely of patchouli and, instead of show tunes, I spent much of my time listening to Scandinavian drone rock. For most of high school, I had the social skills of a terrified third-grader. I didn't particularly understand what I had to offer as a confidant to anybody, much less straight women with endless romantic problems and a passion for trying on Capri pants.

As I moved away from home, to bigger and bigger cities, I discovered that there were lots of scruffy and poorly dressed drone-rock-loving gay men in the world -- especially of my age group -- who had nothing in common with the Stanfords and Wills I'd seen on TV. Just because I was into dudes didn't mean I had to suddenly love dance music or fine furnishings. And yet, despite my continued shortcomings as a stereotypical gay man, I remained a strangely alluring target for a large number of straight women.

I would mention my boyfriend to a girl in my biology lab, and she would inexplicably plop down next to me in class for the rest of the semester. Strange drunken girls at college keg parties would tell me that they're really "a gay man in a woman's body," and ask me to take them to the local gay bar. At a recent birthday party, a female friend of mine (who later described herself as a proud "fag hag") forced me into conversation with another gay friend of hers before telling us, "I thought my two fags should meet -- maybe you can date?" as we both stared at each other uncomfortably.

What struck me about these encounters -- all of which were well-intentioned -- was that these women didn't even fit the fag hag stereotype. The classic fag hags were theatrical, brassy, unconventional; they were the Liza Minnellis, Bette Midlers and Liz Taylors of the world. They drifted toward gay culture because they perceived themselves as outsiders, and bonded with gay men over shared feelings of social rejection, and love of camp, and appreciation of John Waters movies. And hey, they both liked men. A lot. "The company of the gay man gives the straight woman the potential to express her sexuality without feeling the need to tone it down," says Justine Pimlott, director of the documentary "Fag Hags: Women Who Love Gay Men." "There's a mutual identification."

For most of gay history, the fag hag held a coveted spot. "They're the unsung heroes of the gay world," says Shawn Hollenbach, the creator of New York's Miss Fag Hag Pageant. It was a mutually fulfilling relationship: Men got the appearance of heterosexual legitimacy and intimacy free of sexual tension; women got a touch of glamour and performance and exoticism. But most of the overeager, self-described "fag hags" I encountered in my early 20s had nothing of the brazen outsider about them: They were demure, and conventional -- with square-jawed boyfriends and glittery sweat pants and seemingly little understanding of gay culture. "After 'Will & Grace,' women would suddenly ask me to take them shopping," says Hollenbach. "I'd ask if they like 'Mommie Dearest,' and they'd tell me no."

This mainstreaming can largely be tied, along with "Will & Grace," to the comedy of Margaret Cho, the Asian American comic whose big moment came in 2000. With her one-woman comedy show (later made into a book), "I'm the One that I Want," she became the patron saint of fag haggery. Cho, who brags about being raised by drag queens, joked that fag hags were "the backbone of the gay community": "We dragged your sorry ass through the Underground Railroad. We went to the prom with you," she said, "and we're still here." Cho helped reclaim the title -- which, like the word "fag" itself, had been used derisively for years -- and turned it into something funny and aspirational. For Cho, being a fag hag was a badge of honor -- I'm here, I'm with that queer, get used to it.

And the fag hag, indeed, was everywhere. There she was, guiding the young gay man out of the closet on "Dawson's Creek," and crushing on the gay transfer student in "Clueless," and longing for tragic intimacy with Paul Rudd in "The Object of my Affection." It was no coincidence that the first wave of gay male TV characters shared most of their screen time with straight women -- it made us palatable to mainstream America. "It was celebrating the feminine side of gay men, not about going into the bar scene," says Pimlott. "It disarmed their potential threat." And this, in turn, made us into every straight girl's best friend. "It made it seem like every straight girl should have these accessories: Manohlo Blahnik shoes, and a fag."

Nowadays, when a grown woman describes herself as a "fag hag," it feels like she's throwing around a designer label or telling me she knows a celebrity -- a kind of social conspicuous consumption. Worse, it's a designer label that's faded from fashion -- like a Juicy-brand velour sweat suit. In the past decade, gay men have become less defined and ghettoized by our sexuality than ever before, making terms like "fag hag" feel as retrograde as, well, "Will & Grace."

It seems quaint to think about those early days of gay visibility now that we've seen "Six Feet Under," and "The Wire," and "Kings" and "Brothers and Sisters," with their nuanced and red-blooded gay characters. This year's Oscars included male-on-male kisses in several of its montages. And it's not only pop culture that's changed. Across the country, gay kids are coming out earlier and earlier (one recent study placed the average coming-out age at 13), to little more than a shrug from their friends. In many cases, they'll be taking their boyfriend, not their female BFF, to the prom.

If part of the glue that holds together the fag hag relationship is the gay man's need for refuge from the mean jocks and the judgmental parents, what happens when the jocks and the parents stop caring? As the New York Times recently pointed out, friendships between gay men and straight men are no longer the taboo they once were. Most of the gay men I know (especially those my age) are happily mixing with all combination of sexes and sexualities, and, for my part, I'm as likely to take a straight male friend to a gay bar as a straight woman.

More and more, the fag hag is becoming a relic of another era. As a case in point, SWISH (or Straight Women in Support of Homos), the world's preeminent fag hag organization, is undergoing a rebranding. The group, which was cofounded by Sue Sena in 2002, helps fight homophobia and raise money for AIDS research (it's a frequent contender for "best float" at the New York City Pride Parade), and has a presence in 32 states and four countries. In the coming year, it plans to get rid of its acronym in an effort to include more non-fag hags in its ranks. "That's the way the movement is going," says Sena. "If the moniker is eroding, that's a great thing."

So what happens to those fabulous gay-loving straight women of yore, who close down the gay bars at 4 a.m., and pump their fists at the pride march, and stand in long lines for tickets to "Xanadu: The Musical"? They might not be as key to some young gay men's coming of age as they once were. For others, they'll be as crucial as ever -- but hopefully they'll be calling themselves something more accurate. Like "friend."