How Obama can turn it around

The president and progressives may not share every goal, but they need each other 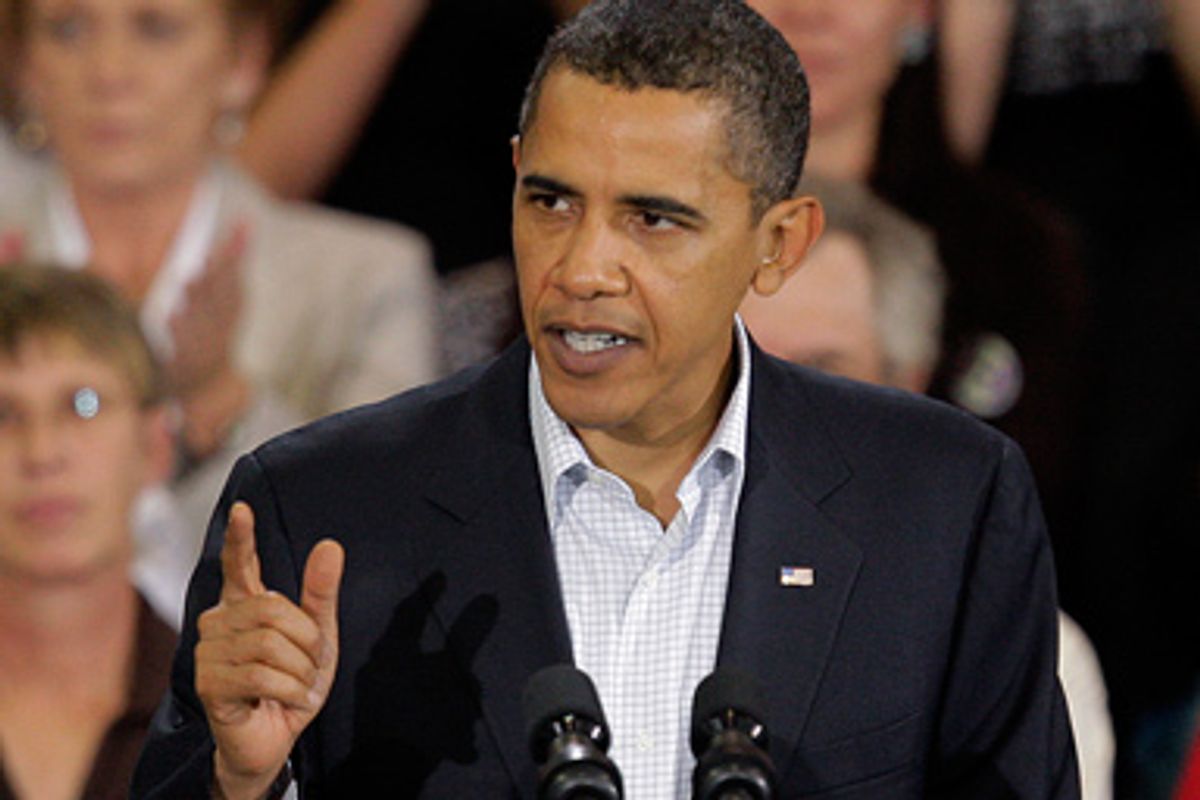 In the darkening chaos of the 2009 healthcare debate, with the so-called public option for expanding health insurance coverage in serious trouble, the limits of the 2008 Obama coalition have become depressingly clear. There were at least two good reasons to vote for Obama in last year's Democratic primary. One was believing he was better than, or at least equal to, the other contenders, and the historic importance of electing our first black president put him well over the top. The other reasonable motive was admiring his calm, conciliatory approach to the partisan paralysis that's afflicted Washington the last 15 years or so, and believing that his charisma and leadership style could ease political gridlock. (I admired and ultimately voted for Obama for both those reasons.)

But there were two bad reasons to vote for Obama, and they were frequently expressed during primary season: That he was a genuine, proven progressive, well to the left of sold-out centrist Hillary Clinton. (Let's remember that Obama opposed mandatory universal health insurance and backed the GOP fiction about the need for social security "reform" – two social policy stands that put him to the right of all the leading Democrats in the primaries.) An even sillier reason was the belief that Obama, by virtue of his equanimity, charisma and post-partisan message, could and would float over the GOP vindictiveness that 15 years earlier mired Bill Clinton in political paralysis, strangled his healthcare reform proposal, and ultimately led to his impeachment.

Both bad reasons to support Obama have been proven wrong by the current healthcare debacle, to the bitter disappointment of many in his base. But it's not too late to face the limits of Obama's political agenda and analysis, as well as the magical thinking of some of his supporters -- and still pull out a healthcare reform bill worth fighting for. Obama and his progressive political admirers are a little bit like strangers in the night, or partners in an arranged marriage, but they can and must learn to make their alliance work, even as they chafe at what they didn't know going into their epochal encounter.

Almost a month ago I explained why it was time for Obama to lay out the key components of the healthcare reform bill he would support. His big priorities -- expanding coverage for the uninsured, prohibiting the exclusion of pre-existing conditions and letting people keep their insurance even if they lost their job –were crucial and worth fighting for. But even then, before the insanity over "death panels" and the barely suppressed violence of the "town hells," there were two looming and divisive questions: Would Obama insist on a public option to provide insurance for the uninsured? And how would he pay for his plans?

I argued it was time for Obama to answer those two questions, and let Congress do what it would in reply. The president could either compromise with Congress, or veto a bill that didn't do what he asked. But at least he could rally his devoted supporters around a clear plan. Maybe more important, he could also spell out decisively, for the worried and skeptical, exactly what the plan he supported would and wouldn't do: how it would provide care to the uninsured, cut costs and how he would pay for it.

Of course my plea represented a misunderstanding of Obama's lofty (some would say naïve) political method: Lay out facts, goals and some core principles, and trust political stakeholders to come together to craft a political solution.

Obama's approach sounds great in theory, but weeks later, there's still no Obama plan – and there may never be. Instead we've got compulsive GOP lying about what Obama wants to do; intimidating thugs carrying guns to Obama's town halls; people genuinely (if ignorantly) expressing panic about what Obama plans; and on the Democratic side, unconscionable, weaselly waffling on the heretofore crucial public option, making progressives almost as uneasy as underinformed GOP voters.

On Sunday Health and Human Services Secretary Kathleen Sebelius said it wasn't "an essential element" of health care reform; after liberal pushback, on Tuesday Sebelius backtracked, insisting "absolutely nothing has changed. We continue to support the public option." Likewise Obama seemed to back away from the public plan, telling a crowd Saturday, "The public option, whether we have it or we don't have it, is not the entirety of health care reform; it's just one sliver of it." Then on Tuesday spokesman Robert Gibbs backtracked with Sebelius, insisting the president still "prefers" a public option. Which isn't exactly a line in the sand: I prefer beach vacations, but I'm willing to spend time in the mountains. I prefer chicken, but I'll eat salmon. Obama's "preferring" a public plan isn't reassuring me.

There's also the troubling matter of the way Republicans are reacting to the "co-op" compromise Sen. Kent Conrad is pushing as an alternative to the public plan – a non-profit but not government run exchange that would try to compete with private insurance. As Alex Koppelman reports, the co-op looks like the worst of both worlds, fiscally and politically: Republicans are calling it "a step towards government-run health care," in the words of Senate Minority Whip Jon Kyl, R-Ariz., who added "therefore no, I don't believe Republicans will be inclined to support a bill." Meanwhile, the GAO says a co-op likely won't save money, and private insurers oppose it anyway.

So what should Democrats do? I'm sure I wasn't the only one who enjoyed watching James Carville insist, on CNN's "State of the Union" on Sunday, that Obama should "put a bill out there, make [Republicans] filibuster it. Make them be what they are — the party of no….Let them kill it. Let them kill it with the interest group money, then run against them. That's what we ought to do." Sixty House Democrats are telling Sebelius more or less the same thing – that they won't support any compromise that doesn't contain a public option. And reports in the New York Times and Politico that leading Dems and the White House are finally grappling with the reality that they may have to go it alone on health are encouraging.

A few smart pro-Obama bloggers, most notably Ezra Klein and Nate Silver, have tried to make the case that losing the public option shouldn't lead Democrats to block the bill, but I'm not sure I can agree right now. Sure, it would be great to cover the uninsured and abolish discrimination based on pre-existing conditions, as well as get Obama a big legislative victory his first year in office. But I think a bill that lacks a mechanism to reduce health care/insurance costs, as the public option would -- the Congressional Budget office estimates it would save about $150 billion over the next ten years, or roughly $1,100 for every taxpayer, according to Silver – sets up the Democrats for political losses down the road.

Conference is where these differences will get ironed out. And that's where my bottom lines will remain: Does this bill cover all Americans? Does it drive down costs both in the public sector and the private sector over the long term? Does it improve quality? Does it emphasize prevention and wellness? Does it have a serious package of insurance reforms so people aren't losing health care over a preexisting condition? Does it have a serious public option in place? Those are the kind of benchmarks I'll be using. But I'm not assuming either the House and Senate bills will match up perfectly with where I want to end up.

I think Klein makes an interesting argument; the problem is it's hard for many progressives to trust Obama after multiple disappointments: on the Wall Street/bank bailouts; on the stimulus, where he compromised to get GOP support rather than hold out for what the economy really needed; on his state secrets and torture decisions, and now on healthcare. I would prefer that, instead of granting Obama so far unearned trust, progressive Democrats continue to push him.

It seems to me it's time for Obama and his Democratic allies to define and back the bill they know will expand healthcare coverage and bring down costs most effectively, not merely the bill they think they can get through Congress. If they push it, and they lose, they can regroup and figure out what to do next. Maybe they save the big push for the House-Senate conference committee. But if they back the cowardly, insurance-company-funded Democrat/GOP compromise right now, they will lose even if they win – and taxpayers and health care recipients will lose the most. Obama may not share all of my political priorities and values, but I know he's at least as smart as I am. What am I missing here?