When liberals fight back 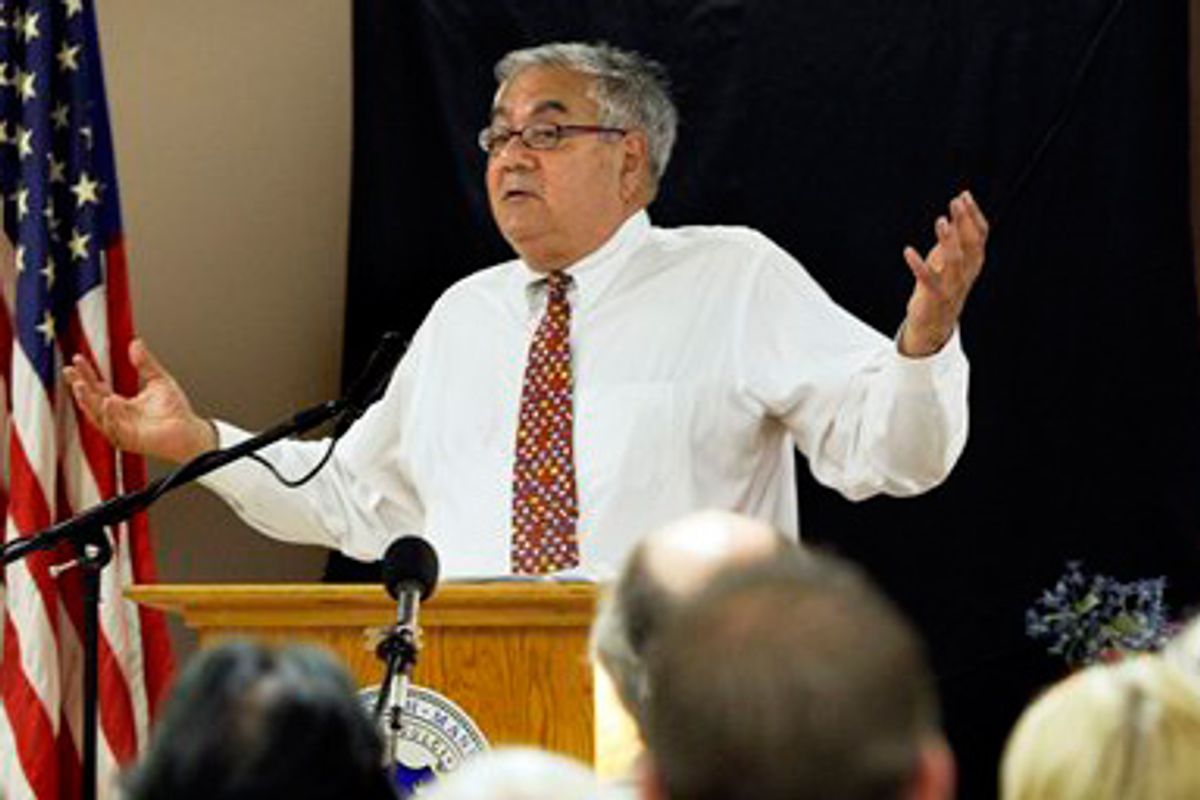 God bless Barney Frank. His outburst at a "town hell" protester who accused him and Obama of supporting "Nazi policy" spread virally around the Web early Wednesday and expressed a lot of liberals' head-splitting frustration. "On what planet do you spend most of your time?" he countered, to lots of applause. Frank called it "a tribute to the First Amendment that this kind of vile, contemptible nonsense is so freely propagated," and closed by saying: "Ma'am, trying to have a conversation with you would be like trying to argue with a dining room table. I have no interest in doing it."

On "Hardball" today, Politico's Ken Vogel suggested Frank's outburst might help the right, but I said I saw the opposite: That Frank's frank talk might embolden liberals to counter lies with truth: The idea that some delusional young woman in Massachussetts (reportedly a Lyndon LaRouche supporter) can accuse a gay Jewish congressman of supporting Nazi policies is reprehensible ignorance, and Frank responded with perfect pitch. Here's our Hardball discussion (text continues below video):

In related news: The dumbest statement of the day didn't come from Frank's town hall critic in Massachusetts; it came from the White House, where an unnamed "senior White House advisor" told the Washington Post that the administration just doesn't understand the passion for the public option among liberals. "I don't understand why the left of the left has decided that this is their Waterloo," said the clueless senior White House adviser. "We've gotten to this point where health care on the left is determined by the breadth of the public option. I don't understand how that has become the measure of whether what we achieve is health-care reform."

I wasn't aware that supporting the public option was the sole obsession of "the left of the left." After all, Obama himself has been touting it as the best way to reduce costs and increase competition in the health care arena. Medicare costs, though rising, are rising more slowly than private insurance costs; Price Waterhouse recently reported that more than $1.2 trillion is being wasted in our current health care system, and the biggest single culprit was duplicative and unnecessary tests and treatments. Since when is it only "the left of the left" that cares about waste and fraud at taxpayer expense? How many times do liberals have to say that we are the only nation without universal health care, that we spend more than twice as much on health care as comparable European democracies, for a few fiscal conservatives to maybe take notice?

Of course our anonymous White House advisor believes he's smarter about politics than the "left of the left," but I disagree. I strongly believe there is a political reason, not merely an economic or social one, for Obama to push the public option: If he caves to the insurance industry and kills it in order to get something, anything passed – as clearly, many of his advisors think he ought to -- taxpayers will be left holding the bag for a wildly wasteful expansion of private insurance coverage, and Democrats will ultimately pay. (I also find it unbelievable that "a senior White House advisor" is clueless about such a large segment of Obama's base, but then, so many lefty bloggers and activists anointed Obama the progressive choice ignoring his legislative bona fides, so it was easy for the administration to ignore what its lefty base stood for. We're all paying for that now.)

Late Wednesday came the mildly encouraging news that the White House is strongly considering splitting the health care reform legislation into two parts, and using the budget reconciliation process – which only requires 51 Senate votes – to pass the more expensive funding procedures. Senate Majority Leader Harry Reid has made no commitment: "We will not make a decision to pursue reconciliation until we have exhausted efforts to produce a bipartisan bill," says Reid spokesman Jim Manley. "However, patience is not unlimited, and we are determined to get something done this year by any legislative means necessary." It's nice to hear an echo of Malcolm X in Manley's rhetoric -- he'd be race-baited by morning if rightwingers were smart enough to associate that rhetoric with Malcolm X – but I'll believe in Harry Reid's courage when I see it.

I should also say I'm agnostic on whether the Democrats should use reconciliation to pass health care reform. I'd like them to be canny, for a change, but more than anything else, I'd like my president to stand up and tell us exactly what he supports – a public option? A surcharge on high earners to pay for it? – before the Democrats decide on the tactics they need to use to pass it. I continue to feel that Obama is ducking his responsibility to lay out what he stands for and marshal his forces. He'll try to rally his most loyal supporters with a Webcast for Organizing for America folks tomorrow – our Mike Madden will be watching – and we'll see if that changes.

Update: Stephen Colbert had the perfect take on Frank's conflict with the delusional protester: