The jiggle is back

Jell-O is cheap, versatile and ridiculously fun. Could there be a more perfect food for a battered economy? 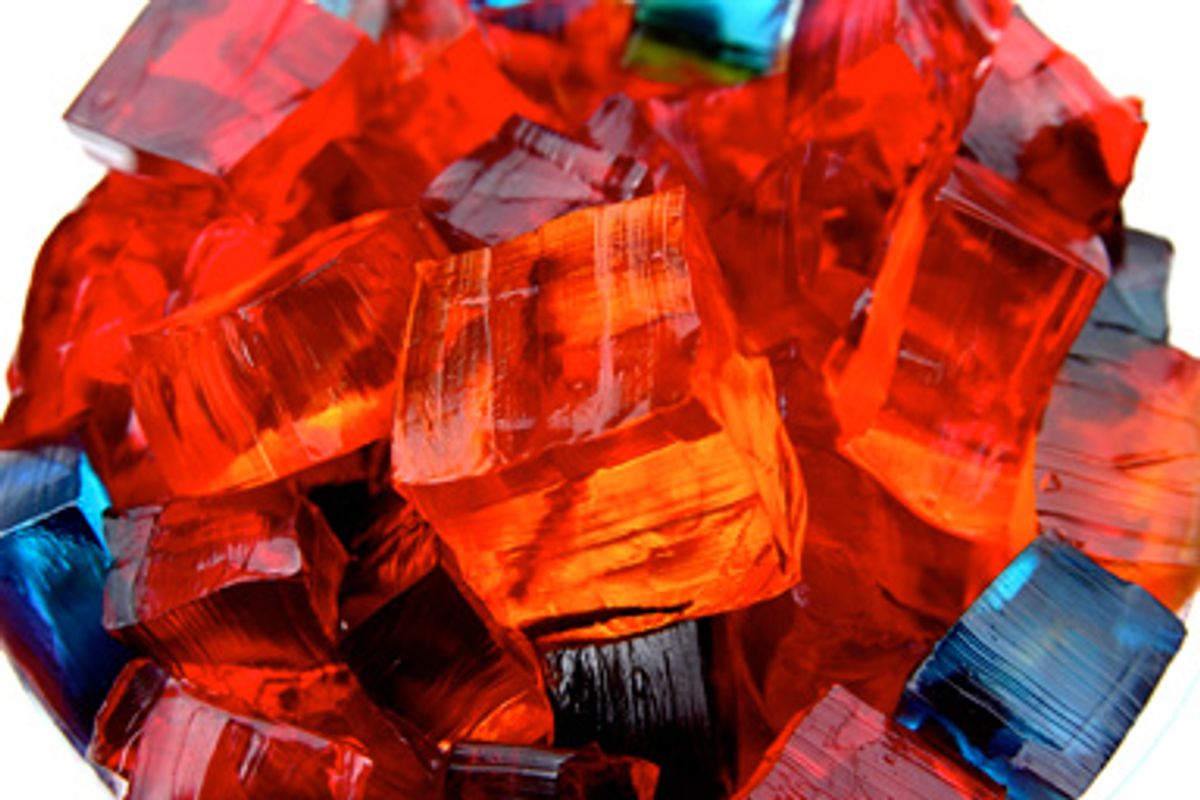 The jiggle is back
--

I am neither Lutheran, a lunch lady, nor a native of Utah – but I admit: I love Jell-O. Give me a wedge of quivering pink pie studded with sliced strawberries and ringed with a corona of whipped cream, or a pile of chilled coffee cubes to pop like caffeinated gumdrops. Watch: I’ll lick my spoon. I’ll giggle when they wiggle.

I come forward with this confession as a serious cook and without irony – because, well, it’s about time someone did. After decades of pretzel and marshmallow-strewn degradation, Jell-O (and its plain old unbranded sibling, gelatin) has served out its term as a culinary punch line. Let’s give the Rodney Dangerfield of desserts some respect.

Now seems like as good a time as any to start: Another August is well upon us, and thermometers around the country are finally nudging their way above 90 degrees. No one wants to soak through a T-shirt standing over a hot stove. Freezers are full of ice cream and Popsicles already, and the long days of late summer are prime time for a little cool-cooking experimentation. Not to mention, recession-minded penny pinchers: compared with single-origin chocolates or pistachio-saffron cakes, gelatin is both pretty and pretty easy on the wallet (At my local Met Food, a box of Jell-O retails for $1.09; Knox unflavored gelatin is $1.59. Pistachios are $7 for 10 ounces.)

I know: The specter of dozens and dozens of odiferous cafeteria lunches, countless cheerless hospital trays, and towering potluck salads of ectoplasmic lime Jell-O and mayonnaise is a hard one to shake. In the modern American cook’s imagination, Jell-O is inextricably linked to the Technicolor convenience foods and culinary disasters of atomic-era housewifery (allow me to present the Gallery of Regrettable Food). But Jell-O, and certainly gelatin, have been a part of the cook’s arsenal for much, much longer than 50 years, and rearview mirrors are notoriously distorting. Examples of sophisticated gelatin dishes can be found in some of our earliest cookbooks, and they were served with honor at the courts of Napoleon and the Medicis. Even more recently, one of my favorite kitchen references, the Women’s Day Encyclopedia of Cookery, a 12-volume guide published in 1966 that featured such esteemed contributors as James Beard and Nika Hazelton, devoted almost a dozen reverent pages to the subject, right between gâteaux and génoise. Its recipes include both the sweet and the savory – from a seafood cocktail salad (glazed with fresh tomato gelatin) to a lemon, fruit and white-wine jelly. Jell-O can be cool and seductive, a playful spectacle, and the ultimate culinary blank slate. Where’s the horror in that?

Indeed the story of Jell-O, like so many other classic American sagas, is a fable of inspiration, invention and fall from grace. For most of their history, gelatins (or jellies, as dishes made with gelatin are known) were strictly aristocratic fare. Their esteem was a reflection, in part at least, of the intense labor required to produce them. Just how hard was it? It helps to begin with some science: Gelatin is simply a hydrocolloid protein that can be extracted from animal collagen in tissue and bones. (Ever wonder what gives great homemade stocks their velvety feel? Yep, it’s gelatin.) High-quality gelatin is both odorless and flavorless; the proteins swell in contact with liquid, dissolve in warm water, and form a firm jelly when cooled. (Cooks today can create vegetarian jellies by substituting agar, a gelatin made from red seaweed, for one derived from animal bones.) But before the development and widespread availability of powdered gelatin, cooks had to collect bones and remove the gelatin themselves. Carolyn Wyman, the author of “JELL-O: A Biography,” describes the whole gory process, thusly:

First, you had to get two calves feet – scald them, take off the hair, slit them in two, and extract the fat from between the claws. Then you had to boil them, remove the scum, and boil them again for as long as six or seven hours – before straining, letting the product cool, skimming the fat, boiling once more, adding the shells and whites of five eggs [to pick up impurities], skimming again, and straining twice through a jelly bag that you would have had to make yourself [there being no Kmart].

Not exactly appetizing. Should it be any surprise that jellies were most beloved by those who could afford to foist the task of preparation on an army of hired help?

Nearly any liquid can be jellied, from fresh juices to meaty broths to spirits and wines – though a handful of raw fruits, including pineapple, papaya, figs, ginger and kiwis, contain an enzyme known as bromelain, which inhibits gelatin from properly setting. (That enzyme is destroyed during cooking and preserving, though, which is why you still see many Jell-O fruit salads studded with Dole pineapple chunks.) As early as the 17th century, chefs were creating dramatic, layered or “ribboned” jellies as dining table centerpieces – but during the Victorian era, with the invention of elaborate, architectural jelly molds, the art of gelatin cookery reached its rococo peak. Many dishes were as practical as they were beautiful. Gelatin was a popular method of preservation before refrigeration became routine, as a jelly encasement could cut off oxygen to food, inhibiting the proliferation of bacteria. In French fine cooking, jellied foodstuffs never fell out of fashion; to this day gelées and savory aspics are celebrated on their own and as a part of iconic dishes, such as pâté en croûte (in which a layer of gelatin and fat insulates the forcemeat terrine from its pastry shell). In Southeast Asia, almond milk Jell-O topped with sliced melon or lychee remains a warm-weather staple; and in Mexico and South America, no market or stall is complete without a refrigerator case chock-full of fruity, creamy or coconutty jellies.

Ultimately, though, like so many other tales, the story of gelatin cookery underwent a drastic reimagining on American shores. The first U.S. patent for a powdered gelatin dessert was taken out in 1845 by none other than Peter Cooper, inventor of the steam locomotive. But Jell-O as we know it today – in all its artificial glory – wasn’t introduced until 1897, when Pearle Wait, a carpenter and part-time patent-medicine tinkerer from LeRoy, N.Y., developed a powdered gelatin with coloring and flavorings already added and marketed it as the world’s first packaged dessert mix. His wife christened it Jell-O. The ads declared: “Just Add Water!” and “Works Like Magic!” The 20th century, and the future of food, had arrived.

Inexpensive and brash, over the next hundred years Jell-O democratized dessert in America – and was transformed from a novelty treat available in only four flavors (strawberry, raspberry, lemon and orange) into a kaleidoscopic, multinational corporate culinary and cultural behemoth. “It might be more American than apple pie,” says Lynne Belluscio, the director of the Jell-O Museum in LeRoy, N.Y. Because it was simple enough for a harried housewife to throw together after picking up Junior from school, yet versatile enough to spiff up when there was company to impress, Jell-O soon became a symbol of postwar suburbia at its most sweet and stifling. But – like a maraschino cherry suspended in a scoop of lime gelatin – that reputation has hardly budged since.

Sure, there have been sporadic revivals and reinventions. Show me a high school graduate who hasn’t slurped down a brain-melting shot of grain alcohol and blue Jell-O from a Dixie cup, and I’ll show you a Mormon. More than a decade ago, the world-class chef Jean-Georges Vongerichten surprised diners at his flagship four-star New York City restaurant, Jean-Georges, by serving a chocolate and raspberry Napoleon with strawberry Jell-O and vanilla ice cream. Then the aughts ushered in the era of the kitchen laboratory, and chefs on the vanguard of the global “molecular gastronomy” movement, including Spain’s Ferran Adrià, Chicago’s Grant Achatz, and New York’s Wylie Dufresne, began playing with gelatin and agar to create whimsical dishes like fried mayonnaise nuggets and beef short ribs swaddled in thin, translucent blankets of jellied Guinness.

Britain has Bompass & Parr, two self-proclaimed “jelly mongers,” whose work includes “bespoke” jelly molds in the shape of Madrid’s Barajas airport, glow-in-the-dark Jell-O, and even Jell-O wedding and funeral towers in the same silhouettes as traditional cakes. And just last month, the Gowanus Studio Space in downtown Brooklyn, N.Y., hosted a Jell-O mold design competition that resulted in feats of artistry and engineering such as jelly jewels and an all-Jell-O hamburger and fries. What’s been missing, though, are creative Jell-O dishes that go beyond nostalgia and kitsch and celebrate the quotidian versatility of the ingredient itself; modern food for every day, created for and by home cooks. Think about it: Cupcakes used to be strictly the stuff of fourth-grade classrooms – now they’re a billion-dollar boutique business. A Jell-O revolution could be unleashed with only a smidgen of that star treatment.

Given its processed, dyed and powdered past, perhaps the most revolutionary approach a cook can take with Jell-O is to start simple and fresh. Invest in a box of unflavored gelatin and a few cups of fruit, and snip a few sprigs from your garden. I came home from an afternoon of berry picking yesterday with a dozen pounds of blueberries, and my window box is spilling over with lemon verbena. Add a simple sugar syrup, a squeeze of lemon, an envelope of Knox – heat, stir, chill, and there’s the evening’s sweet ending. And once you let gelatin’s irreverent nature be your muse, it only gets easier. For instance, maybe you’re sick of tomato and mozzarella salads? Me too. So I’m already eyeing my tomato plants and planning an eye-popping savory terrine of homemade basil-infused Jell-O and meaty slices of late summer beefsteaks.

“When it comes right down to it, gelatin is just fun to play with,” says H. Alexander Talbott, one of the chefs and mad geniuses behind the blog Ideas in Food. “Food doesn’t always have life and texture – but when you slurp gelatin through your teeth, you can feel it moving. It has a force.” That’s right. So, Jell-O warriors, go forth and cook. It is in your power to vanquish the empire of mayonnaise and the mini-marshmallow. And may that force be with you.

A tart and voluptuous summer dessert – without a marshmallow in sight.

Adapted from the Woman’s Day Encyclopedia of Cookery (Fawcett Publications, 1966)

American food anthropologists Jane and Michael Stern attribute the origins of this dish to Durgin Park, a dining landmark in downtown Boston – and, indeed, its straightforward simplicity does smack of Yankee thrift. (Think of it as iced coffee, only solid!) But, in fact, versions of coffee jelly are popular around the globe, most notably in Southeast Asia and Japan. If you like your coffee black, go ahead and eat these unadorned – but beware, they're strong. Otherwise, try them topped with a dollop of fresh whipped cream, or – my favorite – a drizzle of coconut milk.

In a small saucepan, bring the coffee to a boil. Once it is simmering, whisk in the sugar and gelatin. Stir until they are completely dissolved. Turn off heat and let sit for 5 minutes. Pour the coffee mixture in a shallow pan. Refrigerate for 3 hours or until firm.