A look at pilot fatigue, hiring standards and the strange practice of "commuting" 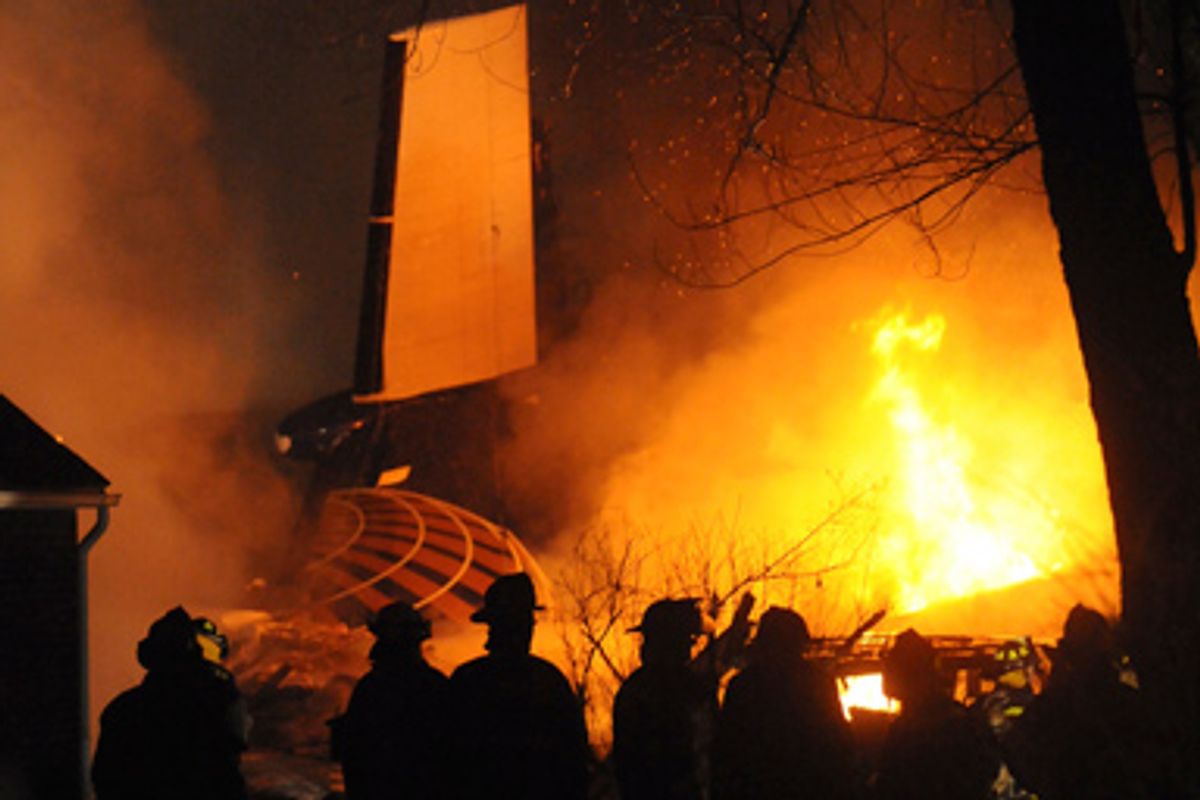 Firefighters are seen at the site of the wreckage of a plane, a Continental Connection flight operated by Colgan Air, which crashed in Clarence, near Buffalo, New York February 13, 2009.
--

The accident, discussed at length in this column, remains under investigation, but from what we know, it embodies all that is controversial and dysfunctional in the world of regional flying, from low pay and crew fatigue to training and hiring standards. It was sad, though perhaps inevitable, that it took a terrible accident to finally stir up public and political interest in such long-simmering issues.

The Airline Safety and Pilot Training Improvement Act of 2009 calls for more stringent hiring minimums, training enhancements -- with an emphasis on stall recognition and recovery -- as well as the long-overdue tightening of flight- and duty-time limits as a means of combating fatigue. It would also set up a series of studies and task forces and allow for more expeditious background checking of a pilot's training record. The Colgan captain had concealed that he had failed three FAA flight tests prior to being hired by the airline.

The proposed legislation is somewhat unusual in that it jumps ahead of the FAA's and the industry's ongoing efforts to address many of these same issues.

The stall-training idea is perhaps the least urgent of the bill's bullet points. Although the Colgan captain responded improperly to an impending aerodynamic stall, I don't believe that inadequate recovery training, in and of itself, was the culprit. The rest of the recommendations, though, are clearly good ideas.

For example, the bill calls for all newly hired airline pilots to possess a minimum of 1,500 hours of total flight time and an FAA Airline Transport Pilot (ATP) certificate. Currently, the ATP is required only for captains and is often obtained as part of company training when a first officer (co-pilot) is upgraded to captain. Upgrades occur through attrition or when an airline expands, and they are awarded solely by date-of-hire seniority.

That's a pretty severe change, but in many respects it would return hiring criteria to previous norms. Twenty years ago, the typical regional new hire had between 1,500 and 2,000 hours and an ATP. But as the majors began large-scale outsourcing of their domestic route structures, the regional airline sector exploded. By the mid-2000s, regionals were eagerly accepting first officers in their 20s with as little as 250 hours!

As I've noted before, the hours in a pilot's logbook aren't necessarily an indicator of skill or performance, and all candidates undergo rigorous training. But there are valuable intangibles a pilot that green simply doesn't possess.

The bill also proposes new restrictions to the number of hours that pilots can fly and/or remain on duty. While we tend to associate fatigue with long-haul flying, it's more prevalent and pernicious in the world of short-haul regional flying. Tougher flight- and duty-time limits would be helpful, but as I discussed in a column in April, the most productive step regulators can take is revising the definition of "rest."

The way it stands today, legal rest periods can be as short as eight hours, and they don't account for the time spent in transit to and from hotels, eating meals and so on. What exists on paper as an eight-, nine- or 10-hour rest might include only four, five or six hours of sleep. The rest clock should not begin ticking until the minute a pilot's hotel room door is latched shut, and it should stop ticking no later than the moment it is opened.

Carriers are fiercely opposed to such measures because they reduce scheduling flexibility and require additional crews. In discussions of the fatigue issue, there has been a growing and somewhat discouraging focus on the practice of "commuting" -- whereby a crew member lives in one city but is based in another. More than 50 percent of crewmembers commute, pilots and flight attendants alike. I am one of them. Our generous employee benefits allow us to fly commercially to and from our assignments.

Note: Contrary to what has been reported elsewhere in the media, commuting is not the same thing as "deadheading," which refers to on-duty repositioning assignments, not voluntary travel.

Commuting can be complicated and occasionally stressful. Airline employees almost always ride standby, and company rules require us to allow for backup flights in case of delays or cancellations. This can mean having to leave home several hours before signing in, in some cases a full day prior. My Boston-New York commute is about as easy as it gets. But I know of one captain who commutes to New York from Alaska, another from France, and a flight attendant who makes the trip from Chile!

Maybe that sounds absurd, but remember that international-category crews might fly only two or three assignments each month. I worry that airlines and their advocacy groups will be scapegoating this, putting an unfair onus on crews. Reportedly, both pilots involved in the Colgan crash commuted in prior to their final workday, and spent the night dozing in the airline's Newark airport crew room -- in violation of company policy.

This incident notwithstanding, commuting, even from long distances, is not the critical issue. Pilots on the whole are pretty good at disciplining themselves when it comes to getting adequate rest prior to work. The problems are the assignments themselves -- again, especially at the regional level, where crews endure long duty days sandwiched between minimum-rest layovers, with only 10 or 12 days off each month.

And although the opportunity to commute is a privilege, it can also be practical. One of the reasons we do it is because aircraft/base/domicile assignments change so frequently. It would be very challenging to uproot and move each time a new bid comes out -- especially if you are a regional pilot with a family, making under $30,000. Over the course of my own career, I've been based in six different cities.

Moreover, can you really expect a junior pilot or flight attendant to live in Boston, New York City or any other expensive metro area on a regional airline salary if he or she doesn't have to? The first officer killed in the Colgan crash, who commuted to Newark from the West Coast, was earning about $17,000 a year.

Lastly, the Airline Safety and Pilot Training Improvement Act of 2009 would require that airlines and online ticket sellers disclose the specific name of the carrier operating any flight. Roughly half of commercial flights nowadays are operated by regional airline contractors whose identities tend to be veiled. It's there in the small print of your ticket, but many people don't notice or understand what this means.

Most of these companies are entirely separate entities from the major carrier whose liveries and flight numbers they share. A pilot for, say, United Express is no more an employee of United Airlines than the cashier at the concourse food court (and probably earns about as much). The majors love the "seamless experience" inherent in their code-share arrangements. That can and should be a good thing -- but so is a consumer's raised awareness of who, exactly, is flying the plane.

I have decided to continue the recent trend of closing each column with a brief conversation about 1980s alternative music. I will do this until Salon's editors issue a cease-and-desist.

That'll be about two weeks, I'm guessing, but I hope they know what's good for them. Remember it was the New York Times' Dan Mitchell who said, "Salon.com tends to bury the work of Patrick Smith under a pile of political diatribes and pop-culture effluvia. That's too bad, because more people should see his Ask the Pilot column, in which he shares his expertise on the airline industry -- with mild snark and delightfully gratuitous references to 80's alt-rock."

I like to think of my snark is something more than mild, but you tell 'em Dan.

Cover songs is what we last were talking about. Hüsker Dü's 1984 version of the Byrds' "Eight Miles High," I opined a week ago (and the week before that), stands as nothing less than the greatest cover song of all time.

As my in box continues to attest, that doesn't sit so well with some of you. A bit excessive, I concede. So let me backpedal. How about the best of the 1980s? Or the best by an indie band?

Several e-mailers also took the time to ask what I thought about one of Hüsker Dü's later and more popular cover efforts -- that of "Love Is All Around," better known as the theme from "The Mary Tyler Moore Show." This was a B-side released in late 1985. My answer is that it's a fun enough song, but not one to be taken particularly seriously. Like most indie covers, it's a novelty. You listen, you like it, and you chuckle. A properly done cover shouldn't be self-conscious.

Skip that one, I say, and instead check out Grant Hart's punchy remake of Donovan's "Sunshine Superman," on the 1982 album "Everything Falls Apart." In a lot of ways, this was the song that tuned critics and fans in to the fact that Hüsker Dü were more than just hardcore thrashers. It wasn't just the idea of a punk band covering a Donovan song, but of its doing so without trying to be ironic. Hart's version is about as unadorned and unpretentious as you can get, yet it's still a kick in the pants. You listen and you like it -- but without chuckling.

That same album closes with a little-known song called "Gravity," the final 30 seconds of which are among Bob Mould's finest moments.

True stories: I once played Frisbee with Bob Mould. June 21, 1984, it was, prior to a show in Easthampton, Mass. (I'm also pretty certain that I'm one of very few fans to meet and shake hands with Bob Mould's parents. That happened that same summer. Mom and Dad were touring the country, stopping in on the band's performances. Bob himself introduced me to them.) And bassist Greg Norton once sat patiently while I peppered him with inane questions for a fanzine interview.

But it was Grant who was always the friendliest and most approachable of the three. I remember a night, between sets down at the Living Room in Providence, R.I., chatting with Grant in the parking lot. He was snacking on slices of cheese when a stray dog came ambling over. Grant shared his cheese with the dog, holding up small bits of it, ever higher, making the dog jump for them.