Now more than ever, bipartisanship is for suckers

Republicans want Obama to fail. He needs to stop seeking consensus, because it makes him look weak 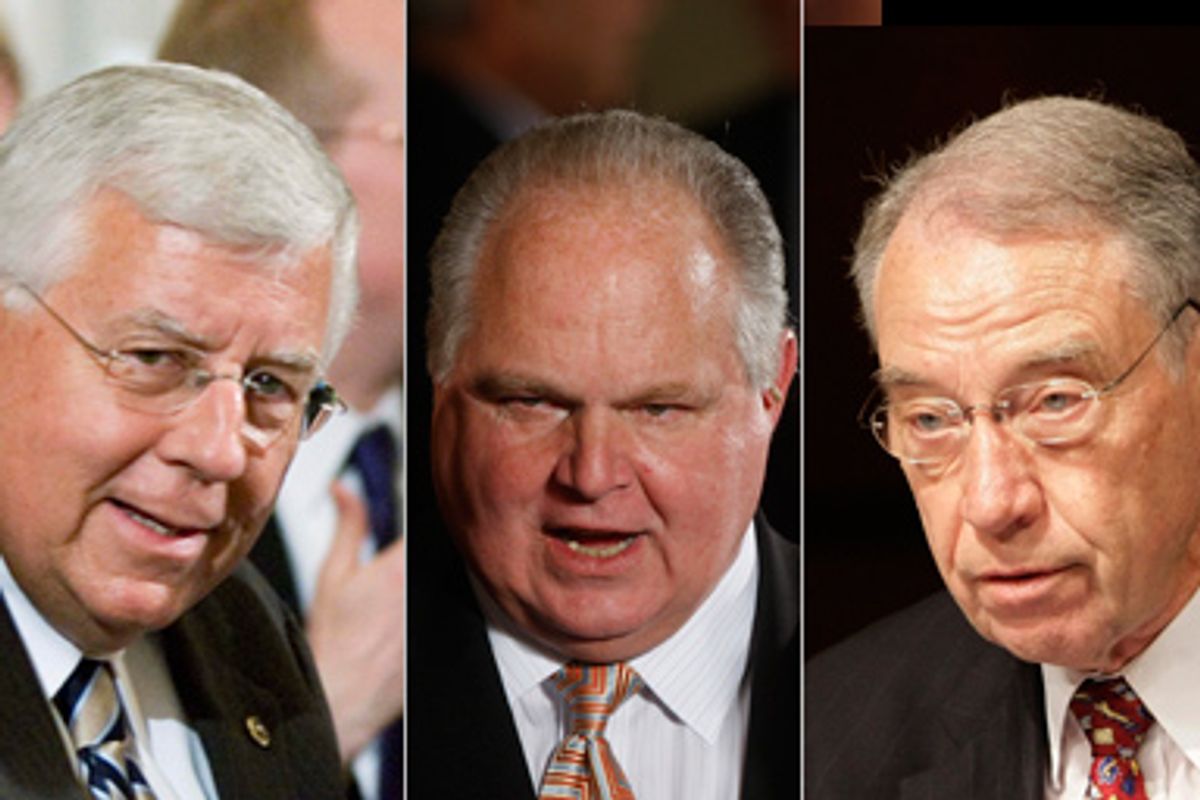 From the earliest moments of Barack Obama's presidency, the most perplexing question was how he would fulfill his promise to change Washington's partisan standoff – and whether that promise was ever more than a rhetorical and political campaign gambit. More than once, observers have suggested that he always knew he couldn't rely on Republicans to act in good faith, to negotiate reasonable compromises, or even to speak honestly in debate. According to that theory, Obama's commitment to bipartisan solutions was and is theater aimed at persuading independent or centrist voters to trust him.

But if seeking consensus is still his strategy, as he and his advisors insist, it may be time for a rethink. All the months of bipartisanship in talk and tactics from the White House have neither brought congressional Republicans closer to supporting Obama's objectives nor preserved Obama's early support among moderate voters. What they have done is encourage the most outrageous conduct by his opponents – including those who themselves claim the bipartisan mantle – and make the president look weak.

The simple truth is that there is nobody on the Republican side who wants to negotiate with Obama. They are no longer afraid of him, and they unanimously want to ruin his presidency, regardless of the consequences. They are in thrall to the stupid extremism that questions the president's citizenship and suspects that he is driving the country toward a socialist dictatorship – while simultaneously demanding angrily that the government be stopped from interfering with Medicare.

Whether there was ever any prospect of significant Republican support for Obama's recovery and reform agenda is a moot point. Certainly, the potential for obstruction and worse, in a party dominated by Rush Limbaugh and William Kristol, always outweighed the possibility of cooperation. Now, however, it should be clear to the president that even the supposedly reasonable Republicans scarcely pretend to want to work with him anymore. What the president must do is make that reality clear to the public.

Lately those reasonable Republicans have given him plenty of opportunities. The most widely noted example is Charles Grassley, the Iowa senator whose dishonest endorsement of the "death panels" myth at a town hall meeting must have ranked as one of the most craven performances by an elected official in that state's history. Dim and reactionary as he usually seems to be, Grassley outdid himself by encouraging Americans to "fear" the healthcare legislation that he is allegedly negotiating in the Senate Finance Committee. He is one of those Republicans – like Sarah Palin – who has demonized end-of-life counseling despite his own past support of that essential service for families enduring distress.

With Grassley it is also important to remember his role in shepherding the Medicare prescription drug legislation sponsored by the Bush White House, the extraordinarily expensive and flawed bill that subsidized Big Pharma and only became law through gross chicanery. For a man who now professes to worry about the evil effects of a new health bureaucracy, he created a hellish paperwork nightmare when that bill passed.

As for the current health legislation, Grassley's position isn't easy to understand. Sometimes he says that he will vote for a bill that meets his positions on certain issues – and sometimes he says he won't, because too many other Republican senators refuse to support any bill.

What number would make him feel cozy and compliant? According to Grassley – and his equally insincere colleagues Mike Enzi, R-Wyo., and Orrin Hatch, R-Utah – any health reform bill must win at least 75-80 votes in the Senate before it could be considered truly bipartisan. Of course, this isn't a standard that any of these legislators required to support initiatives of the Bush administration, or any other Republican bill for that matter. Only Obama must somehow clear that absurd hurdle for them.

Unfortunately, Obama opened himself to this hypocritical gaming when he pledged to pass bipartisan legislation, and he does himself no favors by reiterating that dead promise. He must not be listening when Sen. Richard Shelby, R-Ala., says openly what all of his colleagues believe – namely, that their party's future depends on destroying Obama, which will begin with defeating healthcare reform.

The opportunistic and irresponsible stance of the Republicans was cemented, so to speak, by their amazing reversible positions on the American Recovery and Reinvestment Act, or stimulus bill. Having voted or campaigned against it, they proceeded to take credit for spending in their own communities as if they had supported the bill all along. (Now that it is obviously working, they will probably claim credit for that, too.)

Even John McCain, the Republican who could truthfully boast of working with Democrats on serious legislation, and often did during his presidential campaign, now indulges in sourly partisan posturing. Unlike many other conservatives, who refuse to admit that climate change is real and must be mitigated by government action, McCain has advocated measures to reduce carbon emissions for years, against the grain of his own party. But now that grave issue matters less to him than defeating Obama, so he denounces the White House for seeking "cap-and-tax" legislation, calling it a "giant government slush fund." Instead of negotiating, he pandered to the right by foreclosing hopes for bipartisan compromise.

Faced with lying and demagoguery, confronted by unflinching partisans who want nothing but his destruction, the president has so far refused to respond with equal force. To most Americans, especially those without strong ideological perspectives, that is not a sign of strength. In a time of uncertainty, strength is what the public demands. What matters is not what Obama believes, but how willing he is to fight for what he believes.