Quentin Tarantino's "Jews vs. Nazis" epic is unwieldy, nutso and often boring. That doesn't mean it isn't any good 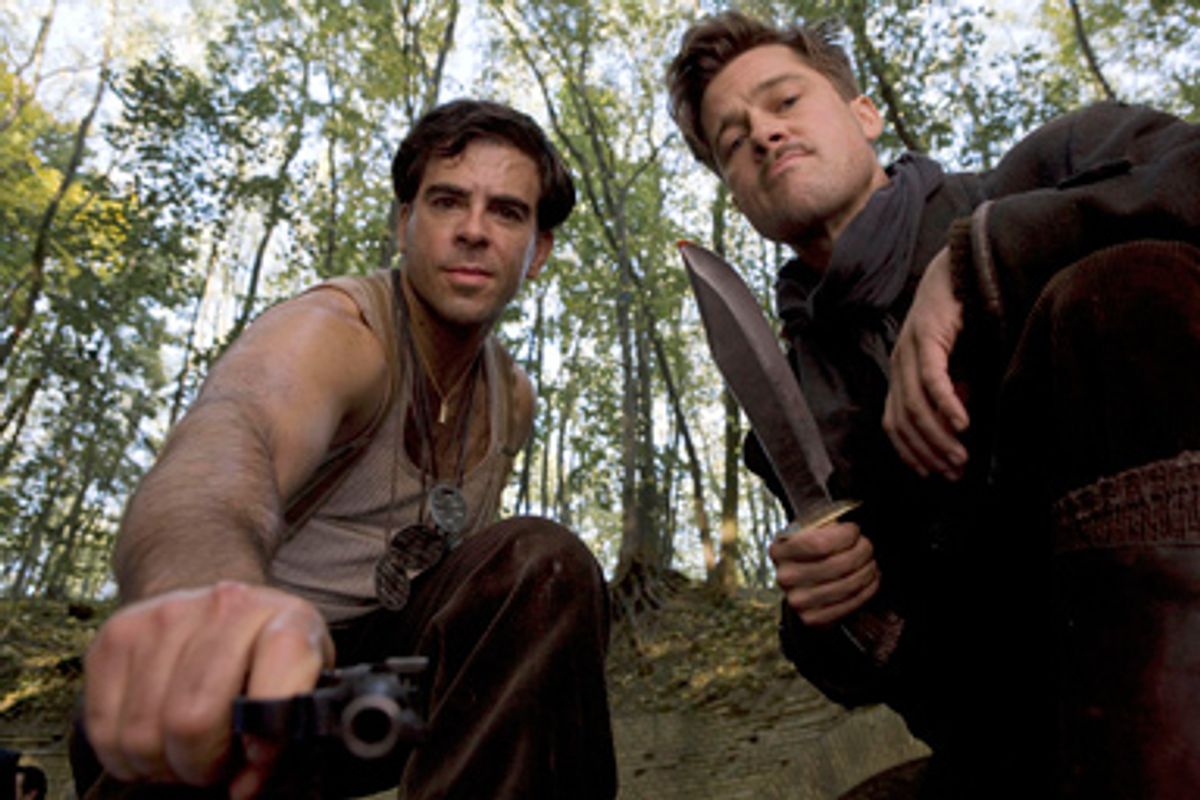 Quentin Tarantino thinks big, and he's got balls. If that were enough to make a masterpiece, "Inglourious Basterds" would surely be one. But "Inglourious Basterds," in addition to having already stirred controversy for its Jews vs. Nazis conceit, is unwieldy, long-winded, self-indulgently nutso and, in places, very, very boring. It also caps off its two-and-a-half-hour run time with an extended finale – partially orchestrated to David Bowie's "Cat People" theme song, no less – that I could watch again and again with pleasure. In other words, Tarantino has taken a huge leap and made a movie that doesn't fully work, which presents those of us who love his work, hate his work or love-hate his work – which should cover just about everybody – with a confounding question: Do we praise the leap, or shake our fists at the result?

In the weeks since I first saw "Inglourious Basterds" (I have now seen it twice), I've done both. I love some of Tarantino's movies: "Death Proof," the second half of the marvelous sleazeball double-feature "Grindhouse"; the gruffly poetic "Jackie Brown"; "Kill Bill: Vol. 2," which has all the soul its predecessor, "Kill Bill: Vol. 1," is missing. On the other hand, I have little feeling for "Pulp Fiction," the movie that was supposed to launch a million great film directors of a new generation: It's ambitious, all right, but the show-off smirkiness of its violence leaves me cold. Tarantino's movies can be endless catalogs of disembodied minutiae, pictures cobbled together from the breathless patter of a former video-store nerd (as Tarantino once was) reciting the plots of every martial arts movie he's ever seen. They can also be exuberant celebrations of the vibe that has always driven trash-movie culture. I've already written that all of Tarantino's movies – the bad ones as well as the good – are marked, and energized, by restlessness, and I'm not sure I can sum up his career (thus far) any better than that.

You can almost hear that restlessness rattling, like a persistent cough, throughout "Inglourious Basterds," which is ostensibly an action movie, although in reality it's made up mostly of people talking. The plot involves a Nazi officer, Col. Hans Landa (Christoph Waltz, in an elegant, superbly controlled performance), who's earned the nickname "the Jew hunter" for his work in occupied France; an American officer, Lt. Aldo Raine (Brad Pitt), who's organized a special squad of Jewish-American soldiers whose job is "killing Nazis" (except as Aldo, a Tennessee bootlegger, says it, it comes out "killin' Gnatzis"); and a beautiful young Jewish woman, Emmanuelle Mimieux (Mélanie Laurent), who's hiding in plain sight in Paris – she runs a movie theater and recognizes a golden opportunity when a Nazi soldier-slash-actor (played by Daniel Brühl) arranges to hold the premiere of his new movie there with a group of Nazi bigwigs (including Hitler and Goebbels) in attendance.

The wild cast of characters milling around in this unholy swirl also includes a top-notch Nazi killer known as "the Bear Jew" (played by torture-horror filmmaker Eli Roth), a purring German movie starlet turned spy (Diane Kruger), and an English officer and spy (Michael Fassbender), who puts his former profession as a movie critic to use in his new line of work. Did I forget to mention that Rod Taylor shows up as Winston Churchill?

It's almost a miracle that, to a person, each of these actors gives a lively, wide-awake performance – as a group, they clearly have a grasp of what Tarantino is after even when we don't. Tarantino writes wonderful dialogue, and some of the dialogue here is no exception. (Pitt has a terrific opening scene in which he plays, deliciously, with the rhythm of the language Tarantino has given him. He informs his men that he wants, "100 Gnatzi scalps!" After a pause, he adds, "And I want my scalps!" After one last beat comes the capper: "Or you will die tryin'!") But Tarantino gets lost in his own forest of language: He creates elongated scenes filled with words (including a seemingly interminable one set in a Parisian basement tavern) to build an aura of menace. That's a lot of building, and in its first two-thirds, the movie groans with the effort of sustaining all that tension.

And yet in the final section – you'll know it's officially begun when you see the words "Chapter Five" on the screen, although the soundtrack will cue you in even more viscerally – "Inglourious Basterds" scales heights that are simultaneously horrific and, well, glourious. It's also the section of the movie in which the "Jews vs. Nazis" showdown manifests itself most dramatically.

There's been a lot of buzz – some of it coming from people who have actually seen the movie, and some coming from the always-more-vocal ones who haven't – about Tarantino's hyper-fictionalization of World War II conflict. Some have asserted that he's trivializing the seriousness of the Holocaust. It bears mentioning that even though "Inglourious Basterds" addresses "the hunting of Jews" by Nazis, its subject is most certainly not the death camps or the mechanized slaughter of Jews. (And in a tense, beautifully sustained opening scene, Tarantino acknowledges – briefly but succinctly – the horror of the fate of the Jews under the Third Reich.) Even beyond that, though, in some minds the idea of Jews banding together aggressively to kick Nazi ass is itself offensive. By now almost everyone has forgotten, with good reason, last year's dreary "Defiance," which is based on a true and inherently compelling story about real-life Jewish brothers who brutally fought the Nazis. But I see Tarantino's movie more as a manifestation of the kind of crude moral justice that fiction – if not fact – can allow us. To me, the aggressively fictional "Jews vs. Nazis" conflict in "Inglourious Basterds" is analogous to "Santa Claus vs. the Martians," an easily readable bit of cartoon shorthand for good vs. evil. Come on – you know whose side you'd be on.

But I wonder if "Inglourious Basterds" might prove controversial to movie fans for another reason: With the exception of a few scenes (one involving a skull-bashing baseball bat, another featuring a finger being pressed, jiggled and wiggled into a leg wound), the violence in "Inglourious Basterds" didn't strike me as excessively brutal. My hunch is that Tarantino isn't particularly interested in violence as a part of telling this story. What he's most interested in is the language – visual, aural and oral – of movies. And even if I can't fully love "Inglourious Basterds," I can wholly embrace Tarantino's desire to explore that language.

Throughout his career, Tarantino has often been guilty of showing off how much he knows about movies, sometimes to the point of being a bore (as in "Kill Bill, Vol. 1"). But over the years, he's gotten better at integrating that knowledge and affection into his work, instead of wielding it like a billy club. Now, when he borrows and name-drops, he often does so with a sense of mischief and fun: Watching "Inglourious Basterds," longtime movie enthusiasts will be able to spot the visual nods to "The Searchers"; if they've seen any '70s Giallo starring the Algerian-born actress Edwige Fenech, they'll giggle when they note that the character Mike Myers plays, in a tiny role, is named Gen. Ed Fenech; they may not know – I didn't – who Lilian Harvey was. (She was the half-English, half-German UFA movie star of the 1930s who stood up to the Nazis and was forced to leave Germany, first for France and then for Hollywood.) But that's what Google is for, after all.

"Who cares about Lilian Harvey?" you may be saying. But the fact that Tarantino cares about more than just showing heads getting bashed in says something about him as a filmmaker, and also something about a culture of moviegoing in America that appears to be dying. Sure, Tarantino may be guilty of a little too much inside baseball. It's one thing to see "Inglourious Basterds" in a roomful of movie critics, who all stroke their chins knowingly when they catch a snippet of Lalo Schifrin or Ennio Morricone on the soundtrack. Movie critics, for better or worse, are the Men Who Knew Too Much and Will Happily Spend Two Hours Telling You About It. (And I say that with as much love as annoyance.) I can see how real-life moviegoers might be frustrated or flummoxed by Tarantino's constant parade of references.

At the same time, in a film culture informed largely by mindlessly enthusiastic fanboys -- where the references that moviegoers fall in love with don't extend much further back than "Why so serious?" -- maybe we need Tarantino and other filmmakers who, like him, have some knowledge of the past. "Inglorious Basterds" may as well have been made according to the nerd's textbook of filmmaking. (I think the section on "Searchers"-style doorway framing begins on page 3,682, for those of you playing along at home.)

But I also think that at this point in his career, Tarantino's vision is opening wider instead of closing in on itself. "Inglourious Basterds" was shot the old-fashioned way: The camera is stationary throughout rather than held by hand – huzzah! (The cinematographer is frequent Scorsese collaborator Robert Richardson, who has also worked with Tarantino in the past.) Tarantino pays careful attention not just to framing shots in a cool way, but also to orchestrating movement within the frame: During his big finale, he shows us Emmanuelle Mimieux (again, a name that's a double whammy of movie references) alone in the projection booth of her theater, draped in a red satin dress – as she moves among the film cans and projectors, she's like a solitary figure from an Edward Hopper painting come to life. Tarantino is only growing stronger at processing and synthesizing the visuals he's spent a lifetime absorbing: The finale of "Inglourious Basterds" contains hints of the meticulous, grand-scale splendor of De Palma, and of the tightly wound, clock-ticking tenseness of Coppola at his best.

It also contains elements borrowed from Looney Tunes, but that's Tarantino for you. In the past few weeks, I've heard colleagues refer to Tarantino as both a genius and a guy who's finally gone off his rocker, and everything in between. Maybe it's the "everything in between" that really matters. One of the movie's final images is a face projected on a wall of smoke, an image so illusory and so beautiful that it makes you want to reach toward the screen to touch it. With the highly imperfect "Inglourious Basterds," Quentin Tarantino seems to be hanging on to a lost world of moviemaking. He may be nuts. But he's a nut who cares.