"My One and Only"

Renee Zellweger's career is not dead yet! This classy period piece features her most nuanced performance in years 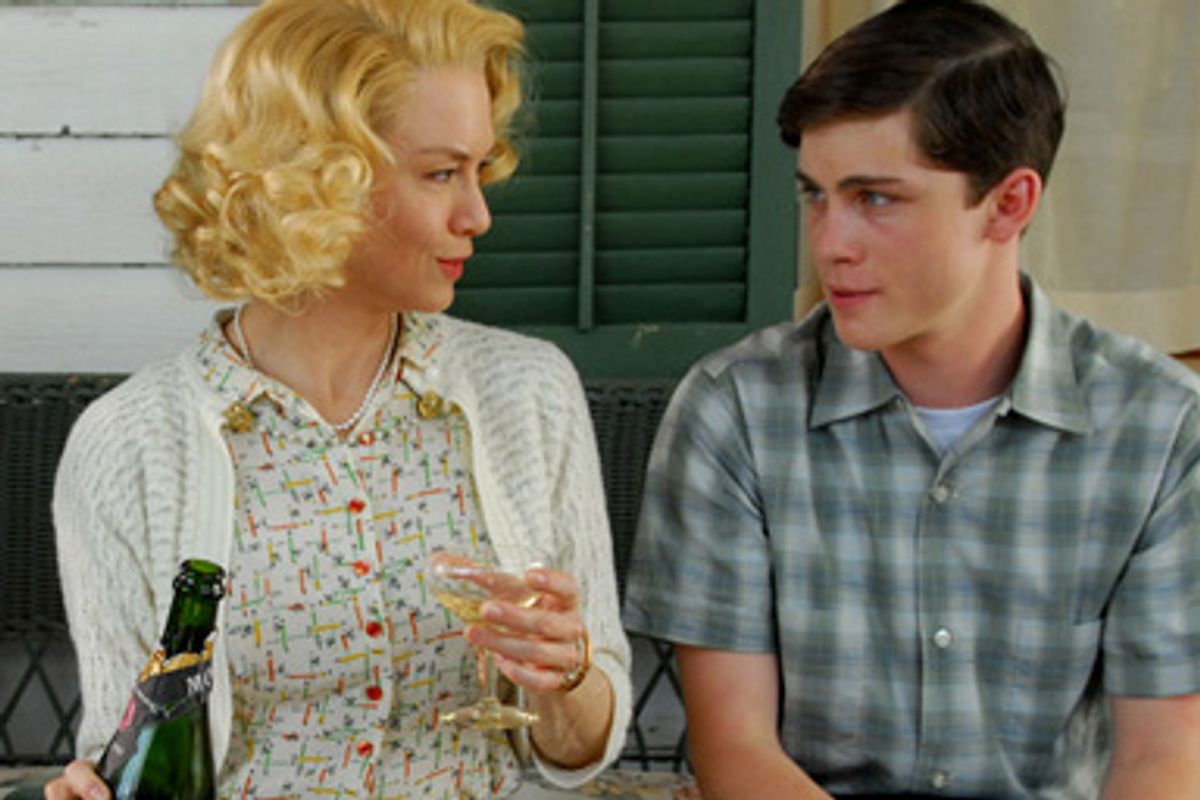 Richard Loncraine's "My One and Only" is a Hollywood-style reimagining of the teenage years of Hollywood-style actor George Hamilton, a performer who may be known more for his ultra-debonair image (and his ultra-tan skin) than for his film roles. But that's part of the point: "My One and Only" is an affectionate picture, set in the early 1950s, that coasts breezily on its charm and style, much the way one of its central (nonhuman) characters, a powder-blue 1953 Cadillac Coupe de Ville convertible, rolls along city streets and winding highways alike. Hamilton may never have been a huge star, but he's often been extremely enjoyable to watch, partly because, in pictures like "Love at First Bite," he has resolutely refused to take himself too seriously. As Hamilton has figured out, great style can be its own reward, and "My One and Only" takes its cue from that idea. The picture has the light, lilting quality of a Benny Goodman solo. Sweet, modest and quietly classy, it's the perfect late-summer entertainment -- and it also happens to feature the most relaxed and nuanced performance Renée Zellweger has given in years.

But let's get back, for a minute, to that car, which makes its entrance in the movie's opening scene: Young George (played by the appealing, suitably smooth Logan Lerman) has been entrusted to choose a new Caddy from the showroom so that he, his stepbrother Robbie (Mark Rendall) and his petite-bombshell mother, Ann (Zellweger), can embark on a cross-country getaway from his philandering bandleader dad Dan (Kevin Bacon). Ann packs the boys into the car -- or, rather, installs George behind the wheel (she knows how to drive, but under normal circumstances, she's the sort of woman who insists on being driven) -- and leaves the family's tony Manhattan digs. They head first to Boston, later moving on to Pittsburgh, St. Louis and one point notably further west, Hollywood. Ann's goal: to find herself a new husband, a breadwinner to take care of her and her boys.

At first it doesn't occur to the fortyish Ann that, despite her attractiveness, she's ill-equipped to compete with the younger women out there who are also stalking husbands. Still, her bubbly optimism barely dims, although it becomes a source of conflict between her and George: Her other son, Robbie, is a theatrical type who spends his spare time embroidering a map of the family's travels onto the back of a shirt. (The movie's coding may be a little coy, but it's intended to be gentle and nonjudgmental.) George, on the other hand, is a serious, bookish kid who can't help missing his father, and his mother's dreamy frivolousness frustrates him. At one point he asks her to name his favorite book -- one he's been carrying around with him like a totem -- and she can't. The picture introduces this conflict with a minimum of drama, as if on tiptoe. But the mother-son conflict isn't the real center of "My One and Only." This is a road movie about imperfect people on the road to something better, only to find that that "something better" isn't anything they could have predicted, or intentionally sought.

Loncraine's two most recent pictures were the fairly generic thriller "Firewall" and the smart, flirty (and underrated) romantic comedy "Wimbledon" (which starred the also underrated Paul Bettany). "My One and Only" -- its script is by Charlie Peters -- has more in common with the latter picture: For one thing, Loncraine has perfect control over the movie's tone. The picture is so buoyant overall that its more touching qualities sneak up on you. Nick Stahl shows up in a small role as a James Dean stereotype, a '50s greaser with a poetic soul, but his performance makes his character more than just a cutout: Stahl finds the generosity that lurks beneath the kid's posturing. And a late scene between Zellweger and Bacon shapes up as a nice little miniature -- Bacon plays a slick showbiz type who's disarming, dissolute and desperate in equal measures.

But "My One and Only" really is Zellweger's movie. For one thing, after a string of too-drab or too-cute roles (like the ones she's played in "Appaloosa" and "New in Town") she once again looks like a movie star: The era's fitted brocade dresses and trimly tailored jackets suit her figure perfectly. And Loncraine and his DP, Marco Pontecorvo (son of renowned Italian filmmaker Gillo Pontecorvo), give her plenty of soft, low lighting -- not because she needs it, necessarily, but because they recognize a simple reality that surprisingly few contemporary filmmakers seem to grasp: Bald, harsh light does no actor any favors.

It's nice, of course, to see Zellweger looking so pretty, but she's a pleasure to watch for other reasons: In an era when most actresses clamor to play characters who are younger than they are, here Zellweger resolutely plays a character who's her own age, or possibly a little older. Her Ann is a breathy platinum blonde who's used to getting her way with men, even as she insists on always acting like a lady. But being fortyish in the '50s was nothing like it is today: A sexually vivacious "older" woman wouldn't be called a "cougar," but something far more unflattering. In one scene Ann tries to make friendly chitchat with a stranger in a bar, with disastrous consequences.

Zellweger plays Ann as a character devoid of self-pity. But she also carries with her a certain mournfulness, a realization that the world of men (and of sex) isn't the friendly, open place she once thought it was. Zellweger acknowledges Ann's fear and doesn't flinch from it: In fact, she teases out Ann's quiet desperation instead of trying to downplay it. That's a bold move for an actress to make in a culture where women are desperate to prove they can be cute and sexy forever. In "My One and Only" Zellweger has nothing to prove, and her confidence is the sexiest thing around.

Movies My One And Only