New films tackle the Baader-Meinhof gang and the IRA's dirty war. Cue the rock music and put on those tight jeans! 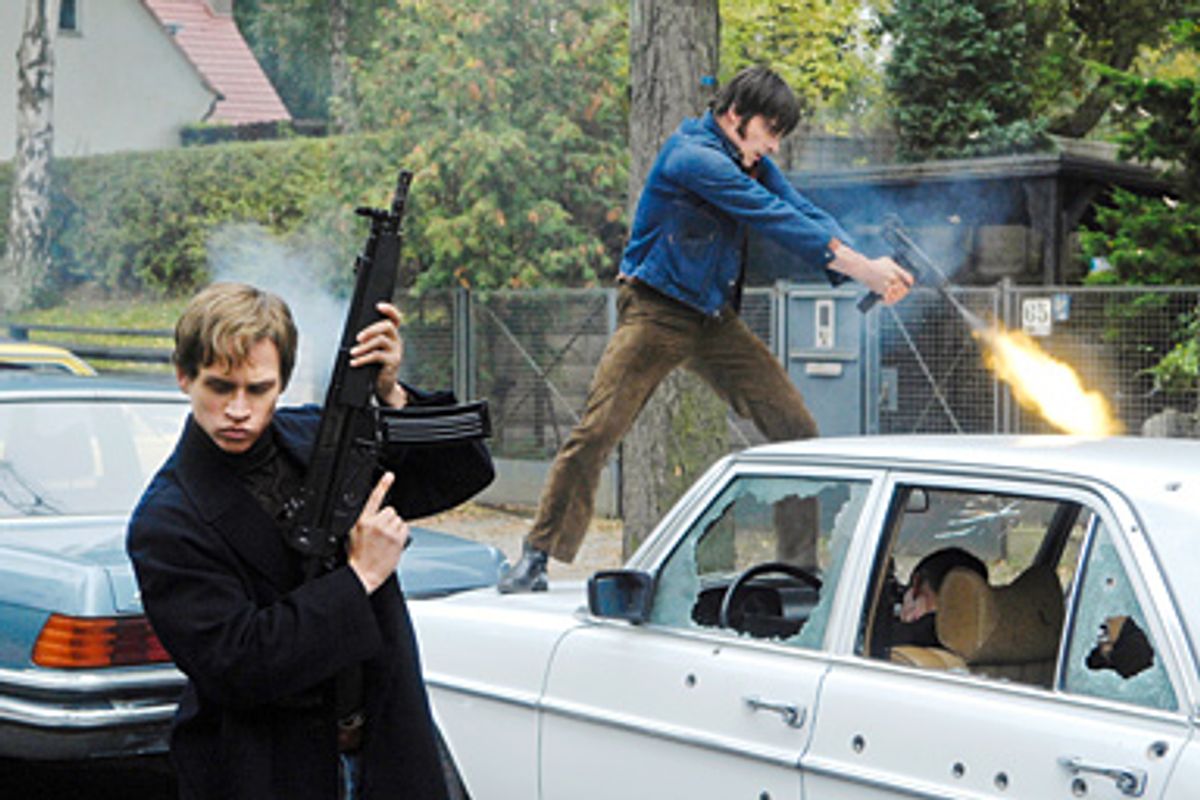 Imagine, if you will, a distant imaginary realm in which terrorists -- people who blow up other people in the name of some political or crypto-religious agenda -- are not dark-skinned foreigners with unpronounceable names but white folks born and raised in the mainstream of Western society. In other words, imagine the 1970s.

Of course it goes a lot further back than that. If you want to get technical, terrorism, in the modern sense of the word, was essentially a 19th-century European invention, and everybody who does it today, no matter how baroque their causes or their tactics, is just aping the old-school anarchists of the late imperial age. But the '70s hold a special and dire place in that history, as a moment when small-scale violent insurrection -- from the left, from the right, along tribal or racial or religious lines -- seemed to break out all over the industrialized world.

That era's most infamous events, like the Patty Hearst kidnapping or the abduction and murder of former Italian prime minister Aldo Moro, have already provided fodder for two generations of novelists and filmmakers. As the events and personalities of the time begin to fade into the wallpaper of history, the nature of the stories we tell each other about them becomes more abstract, more a question of looking for enduring similarities and sharp contrasts.

There may be no real reason, beyond the whimsical machinery of the film marketplace, why three new movies about that era are hitting at the same moment, two of them about Northern Ireland and one about Germany's Red Army Faction. But all of them are striving to dig out truths that seem both very close to the surface and frustratingly difficult to grasp, truths which lie beneath 21st-century reality like a bad dream we can't quite shake.

It's instructive to note that two of these movies have a genetic relationship to another disturbing historical film, director Oliver Hirschbiegel and writer-producer Bernd Eichinger's extraordinary and intense 2004 "Downfall," which chronicles Hitler's final days in his bunker beneath Berlin. Eichinger is also the writer and producer of director Uli Edel's Oscar-nominated "The Baader Meinhof Complex," a dizzying, delirious voyage through the world of West Germany's legendary terror sect. Hirschbiegel, meanwhile, has directed "Five Minutes of Heaven," a quick, angry and reasonably satisfying Irish drama about the modern-day encounter between a onetime Ulster Protestant terrorist and the brother of the man he murdered in 1974.

So many critics have described "Baader Meinhof Complex" as trashy that I was disappointed by its relative dearth of naked Trotsky-reading hotties. If you want expositions on Marxist theory, go watch Godard's "La Chinoise," and you're welcome to it. This is no art film, but Edel and Eichinger supply an action-packed, reasonably coherent account of youthful rock 'n' roll idealism run amok, and how it produced the craziest phenomenon of the crazy European far left. Still, even as the Baader-Meinhof group descends into bombing, kidnapping and murder (and into alliances with Fatah and other Arab terrorist groups), the film never loses focus on the fact that their original social analysis -- that postwar West Germany had become a puppet of American foreign policy -- was entirely correct.

One of the largest productions in postwar German film history, "Baader Meinhof" has 123 speaking parts, headed by Teutonic film stars Moritz Bleibtreu as terrorist badass Andreas Baader and Martina Gedeck as sexed-up journalist-gone-wild Ulrike Meinhof. (Eichinger's script is based on a definitive book by German journalist Stefan Aust.) There is no possible way an American viewer can follow all those characters and all the twists and turns of the plot -- why are all these German radicals sunbathing nude in the Jordanian desert? Who took those hostages in the Stockholm embassy, and why? -- but that's really not the point. You might say that the point, made in a different way by Chris Marker's amazing documentary "A Grin Without a Cat," is simply to observe that these things really happened and that we pretty much don't talk about them.

As nutso as the Baader-Meinhof group's revolutionary aims seem in retrospect, Germany and several other Western nations were rocked to their foundations by these Che Guevara-style insurrections. Should we be grateful that none of these radical groups actually managed to bring down a government or to plunge their society into total chaos? Sure, I guess. But we should also take away the lesson that the systems we call capitalism and democracy were not ordained by God, do not reflect the end-point of history and are not destined to last forever.

Perhaps because there's such an enormous Irish-American population, which has tended to view events in its ancestral homeland through a peat-smoke haze of sentimentality, the Northern Ireland conflict has gotten way more than its share of big-screen treatments. More or less dormant since the Good Friday Agreement of 1998, the Irish turf struggle was a low-intensity but especially dirty war, involving two racially and ethnically indistinguishable groups fighting over a tiny piece of real estate and stuck between two governments who might both have preferred to wall the whole place up and forget about it.

Although often compared to the Israeli-Palestinian conflict or the Balkan civil war, the Irish "Troubles" were very much their own animal. As ugly and oppressive as Belfast was in the '70s, it was still safer to live there, simply in terms of mortality, than in New York or Los Angeles. Hirschbiegel's "Five Minutes of Heaven," which stars Liam Neeson opposite an explosive, kettle-boiling-over performance by James Nesbitt, is based on the lives of two real men, and it captures the awful intimacy and the grimy, second-rate quality of the Northern Ireland conflict in resonant fashion.

Once a teenage gunman for the Ulster Volunteer Force, an underground Protestant militia, Alistair (Neeson) is now a globe-trotting expert in reconciliation who has worked in Kosovo and South Africa without ever facing the crime in his own past. As a 16-year-old in the divided town of Lurgan, Alistair murdered a man he knew slightly, a Catholic shipyard worker who had refused to yield his job to a Protestant. More than 30 years later, Alistair is a guest on a sober and serious reality show, where he's supposed to come face to face with Joe (Nesbitt), the murdered man's younger brother, who witnessed the crime as a small boy.

Screenwriter Guy Hibbert worked closely with the real-life models for Alistair and Joe while writing his script (in fact, those are their real names). While you can't doubt his honorable intentions, that may explain why their actual meeting, when it finally comes, is both melodramatic and underwhelming. That's too bad, because both men are crackling characters, and the terrible memory they share -- of pointless tribal warfare, with historical and cultural roots so deep no one can see them, taking place on the streets of a down-at-heels European town -- is depicted in marvelous detail. Watching a couple of hoods stealing a car on the streets of 1974 Lurgan, you can feel their half-frozen fingers, along with their fear and stupidity.

I've left Canadian writer-director Kari Skogland's "Fifty Dead Men Walking" for last, because it presents such a quandary. It tells one of the Northern Ireland conflict's most fascinating stories, that of informer Martin McGartland, a highly placed Irish Republican Army volunteer who leaked numerous IRA secrets to the Special Branch, a British counter-terrorist police force. McGartland remains a hated and hunted figure in Irish republican circles; a would-be assassin badly wounded him in 1999, and he remains in hiding. Skogland, on the other hand, wants to celebrate him as an unsung hero. Her title references the idea that 50 or more British soldiers, Ulster police officers and other potential IRA targets were saved because of McGartland's information.

It's an intriguing premise, but even setting aside the question of my own tribal loyalties, Skogland doesn't make it work. "Fifty Dead Men Walking" has occasional flashes of convincing atmosphere and a likable lead performance from Jim Sturgess as McGartland, who comes off as a rakish good-for-nothing with few, if any, political convictions. But the movie is fighting uphill all the time, between trying to deliver awkward expository passages about the political background, explain McGartland's complicated motivations and somehow render his Special Branch handler (played by Ben Kingsley, in another of those getting-the-accent-just-right roles) sympathetic, despite the fact that he's a secret policeman for a regime that pioneered so many of the torture tactics later perfected at Guantánamo Bay.

OK, maybe my tribal roots are showing a little with that one. But painting a Benedict Arnold or Mafia-turncoat-type character who has betrayed his own people as a human and sympathetic figure, no matter what the setting, is a difficult challenge. Simply assuring us over and over again that he's a hero because he saved people's lives is not the solution. What if the people he saved were degenerate murdering assholes? I'm confident that Skogland's portrayal of the IRA as a paranoid, sadistic gang is accurate, and she does show us how McGartland became a casualty of bureaucratic infighting within the British security force. But the ugly truth -- that no one involved in the Irish conflict has remotely clean hands, and certainly not Martin McGartland -- just isn't here.

Finally, at the risk of seeming provincial, why is it OK that some Canadian has made a movie set in Ireland with no Irish people among the principal cast? Sturgess and Kingsley are English, as is Natalie Press, who plays McGartland's wife. Kevin Zegers, who plays McGartland's best IRA buddy, is Canadian, and Rose McGowan, who plays a hotsy-totsy Mata Hari IRA commander, is American. The accents are occasionally slippery and there's the odd dialogue error (e.g., "parking lot" for "car park"). But I mean, if some Australian director came and made a movie about small-town Texas, and everybody in it was a foreigner trying on some cowboy boots and some "y'all's," wouldn't that be weird?

"Five Minutes of Heaven" is now playing at the Angelika Film Center in New York. It opens Aug. 28 in Los Angeles, Sept. 4 in Philadelphia, Sept. 11 in Chicago, Sept. 25 in Boston and Detroit, Oct. 2 in San Francisco and Oct. 15 in Seattle, with more cities to follow. It's also available via IFC Films on Demand on many cable-TV systems.

"Fifty Dead Men Walking" is now playing at the AMC Empire and the Quad Cinema in New York, with more cities and DVD/BD release to follow.