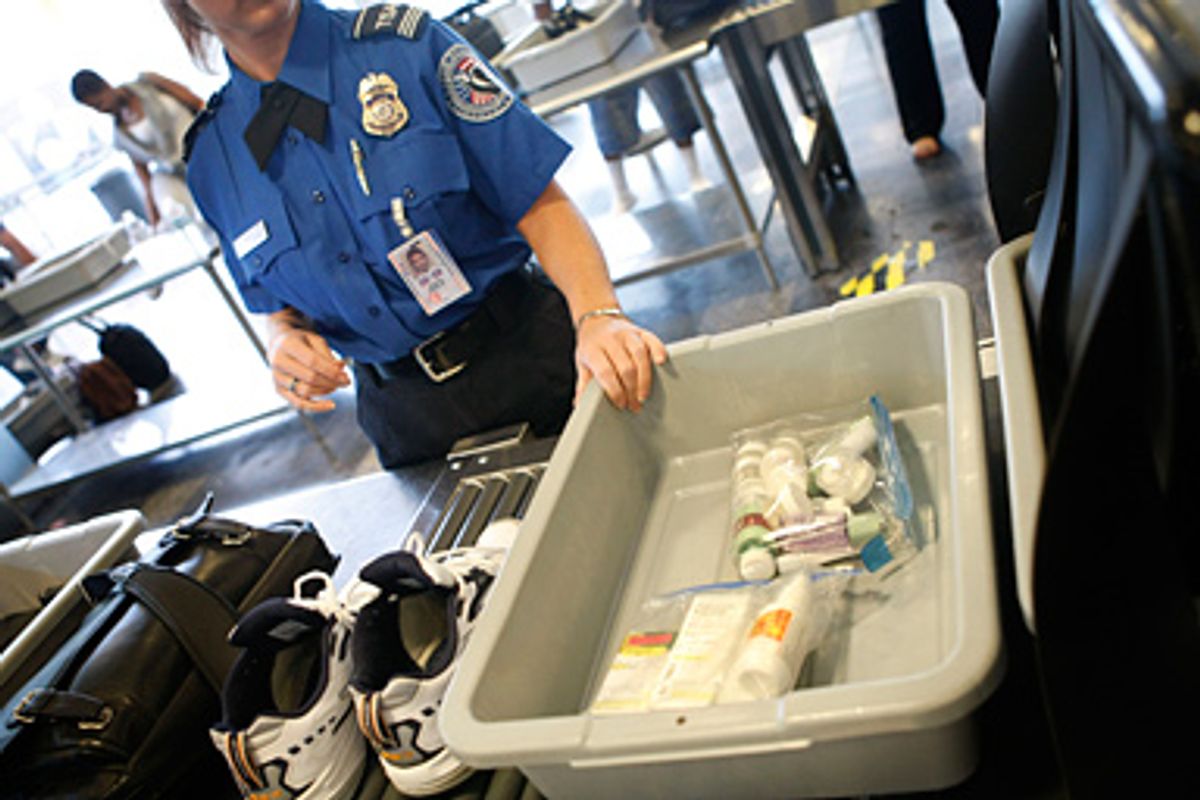 A TSA supervisor guides items into the X-ray machine at Ronald Reagan National Airport in Washington in 2008.
--

Abdel Baset Ali al-Megrahi, sentenced to life in prison for his role in the bombing of Pan American Flight 103 over Lockerbie, Scotland, in 1988, was released from a Scottish prison on compassionate grounds last week. Granted passage back to Libya, al-Megrahi, 57 and terminally ill, was given something of a hero's welcome. Many in Libya -- indeed many in the West, including several families of Lockerbie victims -- have never been convinced of his guilt.

Was releasing al-Megrahi, convicted of the worst-ever terrorist attack against a civilian U.S. target, the right thing to do? Honestly, I can't tell you. And honestly, I'm not too keen on debating it.

The reason this story nags at me has less to do with the moral uncertainty surrounding his release than the way it indirectly highlights the continued failure of airport security and our continuously bungled response to the threat of terrorism.

Pan Am 103 was but one in a long string of terrorist attacks against civilian aircraft throughout the 1970s and 1980s. Despite what many young Americans seem to think, aircraft sabotage did not begin with the attacks of Sept. 11, 2001. It has been with us for decades (see a list of them). But through it all, and despite our intoxication with security, we have still not adequately confronted the danger. On the contrary, our obsession with the events of 9/11 has left us vulnerable.

The novelty of the Sept. 11 attacks notwithstanding, the primary threat to commercial planes is, was and shall remain the smuggling aboard of explosives, which is what happened on Pan Am 103. The bomb came onboard in a suitcase. The hijack paradigm changed forever on 9/11, rendering the inflight takeover concept unworkable for a terrorist.

In any case, and in spite of the Transportation Security Administration's best efforts, there are limitless ways to sneak knives and other dangerous materials past guards; not to mention, a deadly weapon can be fashioned from just about anything, including plenty of materials found on airplanes. (I'll point out that even maximum-security prisons are unable to eliminate knives and contraband.) Yet whether by virtue of incompetence or willful ignorance, TSA continues to waste untold time and untold millions of dollars on a tedious, zero-tolerance fixation with blades and sharps. This does nothing to make us safer, and in fact draws security resources away from worthy pursuits.

Yes, TSA scans most bags for explosives. Mandates were put in place after 9/11 that have greatly increased the percentage of bags that are run through high-tech detectors, with a goal of screening all of them. But eight years later, screening is still not fully comprehensive. It does not yet include 100 percent of luggage and cargo, and procedures remain inadequate at many overseas airports from which thousands of U.S.-registered jetliners depart each week.

Neither is there widespread screening for explosive materials that somebody can carry on his or her person. Good luck getting a hobby knife through a concourse checkpoint, while a pocket full of Semtex is unlikely to be noticed.

I have long been a proponent of the idea that the true grunt work of keeping criminals away from airplanes takes place well offstage. It is the duty of law enforcement and intelligence agencies, not the duty of front-line guards at an airport. And I concede that a devoted adversary will almost always find a means of skirting whatever preventive measures are in place.

There is a level of inherent risk that we simply must learn to accept. But, if we are going to have an airport security apparatus, and if we are going to devote millions of tax dollars to the cause of thwarting attacks, can we please do it smartly and at least improve our odds?

Am I the only one who finds it maddening, and even a little scary, that we can't get this right? Is it not a national disgrace that TSA should spend its time confiscating butter knives from uniformed pilots rather than focusing on deadly threats with a long historical precedent?

Where are the voices of protest? As I've said before, the airlines ought to be speaking out and pressuring TSA to revise its policies. I know it puts them in a tough spot, liability-wise -- carriers don't want to be perceived as opposing security, even when that security isn't helpful -- but much of what people despise about flying pertains to the TSA rigmarole.

And passengers, for their part, are apparently content with, or at least resigned to, the idea of security theater in lieu of the real thing. Indeed, rather than demand or expect change, hundreds of thousands of Americans have paid good money for the chance to simply circumvent the hassle of TSA.

Although doing that has become somewhat more difficult of late.

As you maybe heard, the company known as Verified Identity Pass (VIP), operator of the "Clear" airport security fast-lanes, abruptly ceased operations earlier this summer. Founded in 2003 by Steven Brill -- he of the old Brill's Content magazine and other ventures -- the company was an offshoot of TSA's Registered Traveler program, whereby passengers, after forking over biometric data and an exorbitant annual fee, would be able to bypass long screening lines. VIP charged between $178 and $199 annually for Clear lane access.

Needless to say I was never a big fan of the Clear concept. The company was filling an obvious, even gaping entrepreneurial void, but the idea of citizens paying to bypass TSA's lunacy strikes me as a gesture of civic laziness and self-subjugation in the extreme.

Or, well, to be, um, clear, they never quite got to the "circumventing the lunacy" part. All that Clear entitled you to do was move to the front of the line, which makes our participation even more embarrassing. And what was the purpose of undergoing background checks and providing biometrics if you still had to comply with the normal screening process anyway?

David Castelveter, president of the Air Transport Association, lobbying wing of the major airlines, wasn't too fond of Clear either, albeit for a different and perhaps baffling reason. "The whole process today has greatly improved since 9/11," Castelveter told reporters. "It has been streamlined, there are better checkpoints and travelers are just more savvy these days."

Really? I would submit that if indeed today's security lines move more swiftly than in the past, this is not a justification of TSA's silly rituals. Rather, we've simply gotten better at the routine. We have grown so accustomed to having our patience tested and our dignity eviscerated that we're quicker at assuming the position. I'm sorry, but this isn't a sign of progress, it's a sign of cowardice and capitulation. Here were a quarter of a million Americans (the number of VIP's paid subscribers) willing to part with hundreds of dollars in order to skirt the pointless, humiliating protocols already funded by their tax dollars.

VIP was one of three competitors using the Registered Traveler concept. The others remain in business. "The need for intelligent risk management hasn't diminished," said Brill, who had left VIP earlier in the year.

I would agree, though, that management ought to be the job of an overhauled and effective TSA, not the job of outside companies eager to capitalize on the agency's foolishness.