During her remarkable summer media blitzkrieg, a stunning grasp of made-up facts 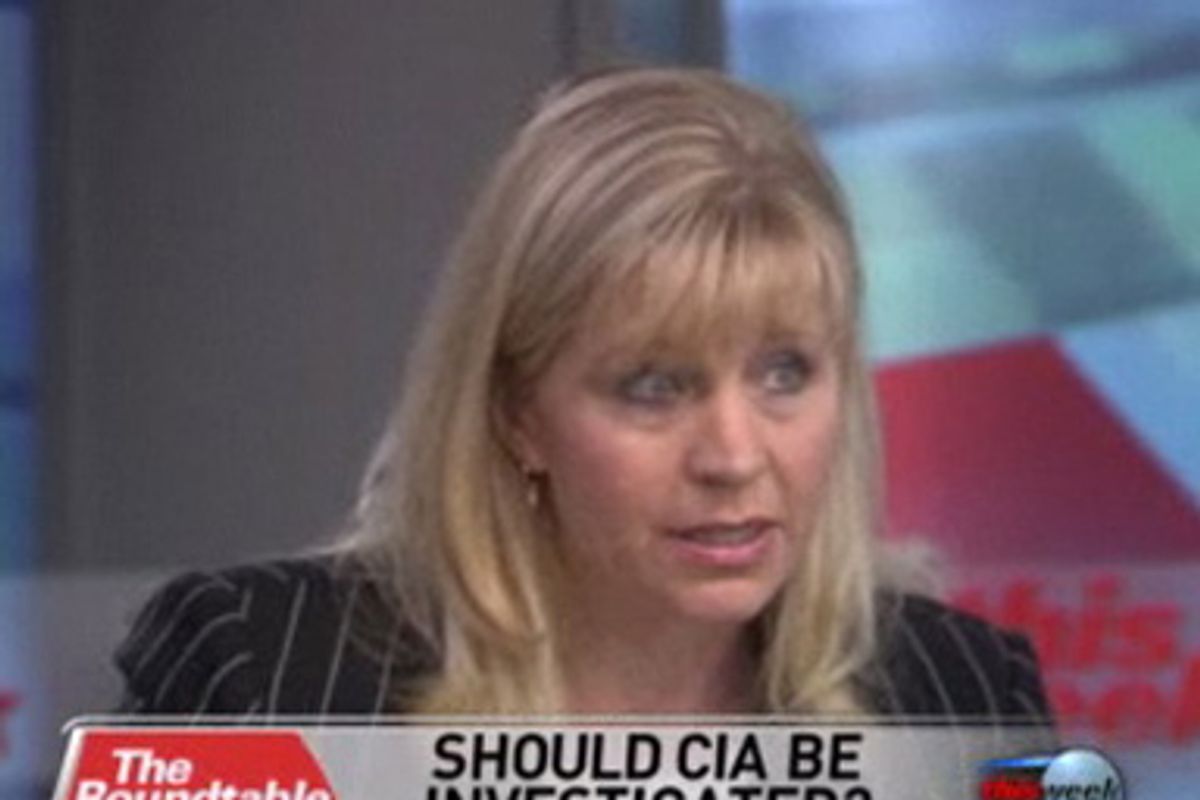 Liz Cheney, the easily exasperated eldest daughter of former Vice President Dick Cheney, has become a one-woman TV juggernaut in 2009, racking up more airtime than a cloud as she defends her daddy's administration records.

And boy, is she wrong. Unlike so many TV pundits who spin and slide around the facts, Cheney makes no fuss about completely ignoring them, and sticking to talking points that have little relation to the truth.

Take her appearance Sunday, on ABC's "This Week," which was riddled with the sort of misstatements, obfuscations and downright lies that have now become a staple of her TV performances (video of the show is below).

When the discussion turned to Attorney General Eric Holder's decision to investigate the CIA's interrogation practices used on suspected terrorism suspects during the Bush administration, Cheney adamantly argued against the probe. She said, "But this investigation has already been done. This was looked at for five years by career prosecutors. They decided not to prosecute except in one case where a contractor has been convicted and is in jail."

The Justice Department's ethics office, the Office of Professional Responsibility, which handles attorney misconduct, recommended that nearly 12 prisoner abuse cases be revisited by Holder. This clearly suggests that the OPR is not satisfied with the previous investigations into the cases that occurred during the Bush administration. As, according to the Justice Department Web site, the OPR “is responsible for investigating allegations of misconduct involving Department attorneys,” it is likely the office concluded that the Bush-era attorneys who made the previous decisions erred in some way.

During her appearance on ABC, Cheney also said directly that waterboarding "isn't torture." However, those in the Bush administration privately acknowledged that waterboarding was torture and President Obama has said it definitely violates the Geneva Conventions -- as has Republican Sen. John McCain. There seems to be near-universal agreement that waterboarding is, in fact, torture.

In a video made by ABC of the round-table participants talking after the show, Cheney then invoked the "ticking time bomb" scenario to justify using "enhanced interrogation techniques" and said that torture had worked in the past to prevent attacks on the U.S. However, recently released documents on the CIA's use of torture on detainees did not show that torture worked.

From just mid-May to early June, Cheney appeared on television news programs at least 22 times. And nearly every time she's been on, she's taken the opportunity to criticize President Obama -- but has often done so by reiterating factually dubious claims or flat-out lies. As MSNBC's Rachel Maddow quipped in June, "Liz Cheney is still on TV -- making news by apparently making stuff up." Yet, when asked why Cheney is continually booked on MSNBC, despite her problems with the truth, a network spokesperson called Cheney a "great guest."

Indeed. Here's a look at some of the recent times Cheney has strayed from the truth: