People like Lorrie Moore are the only people here

The celebrated author's "A Gate at the Stairs" is aggressively clever, meticulously crafted -- and exhausting 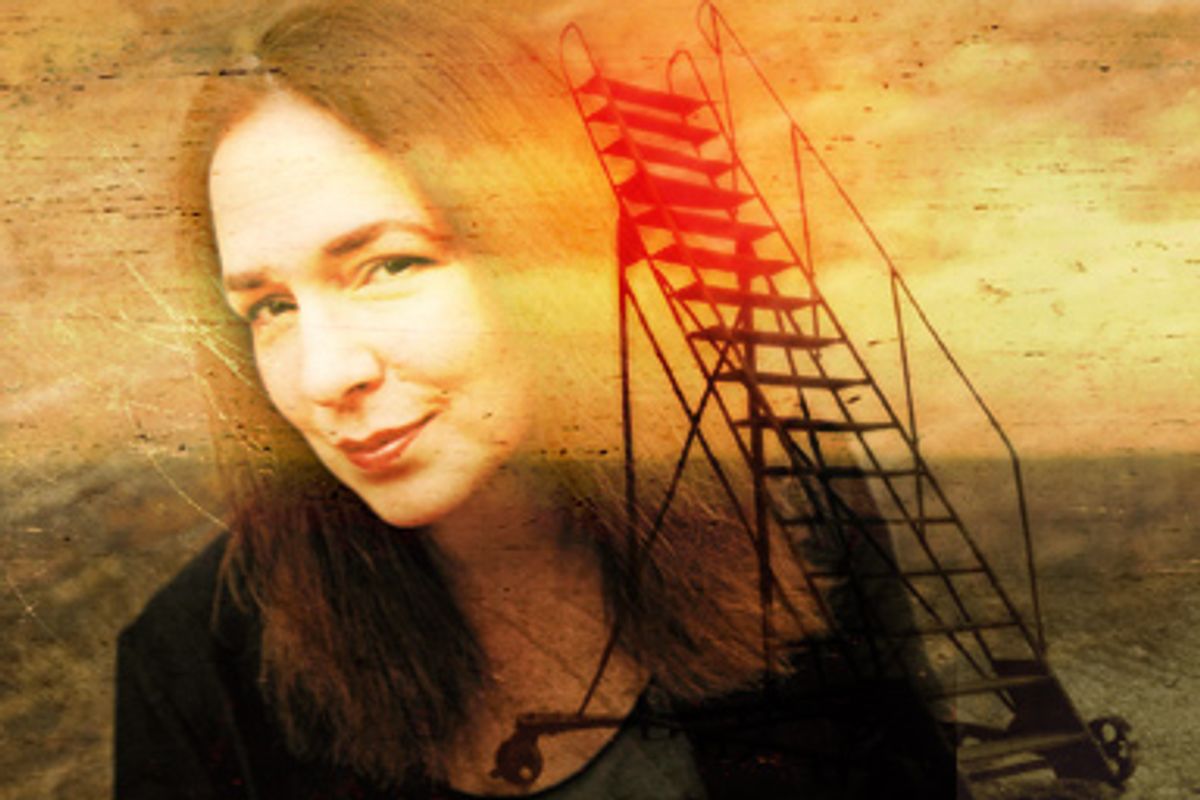 Lorrie Moore is that rare bird of America, a fiction writer who has found success writing short stories as opposed to novels: Her acclaimed 1998 "Birds of America" became a bestseller, one of just a few short-story collections in the past dozen years or so to resonate with consumers as well as with book critics. (Jhumpa Lahiri's 2008 "Unaccustomed Earth" is one of the other rare examples.) The short-story form seems to suit Moore, maybe because her aggressive cleverness as a stylist is less dense, and less forced, when it's diced into smallish bits. It could be that Moore's digressions and miniaturized observations are more amusing -- and her dramatic punch lines more moving -- when they're rendered in the shorter form.

Could that explain why "A Gate at the Stairs," Moore's third novel, is so exhausting and, ultimately, so emotionally unsatisfying? "A Gate at the Stairs," set in the year following 9/11, tells the story of Tassie Keltjin, a young Midwesterner who's just left her parents' small farm -- her father grows boutique vegetables, special jewels prized among foodies and restaurateurs -- to attend school in a progressive college town. She needs a job, which is how she meets Sarah, a tense career woman (she runs a chichi restaurant that happens to serve Tassie's dad's potatoes), who, with her often-absent husband, Edward, is about to adopt a baby. Sarah wants Tassie to participate in every step of the process, including interviewing the potential birth mothers. And so eventually, Sarah and Edward, with Tassie in tow, come home with a child: A little girl, nearly 2, whom they call Mary-Emma. Right away, Tassie becomes emotionally attached to her young charge. She's also drawn deeply into Sarah and Edward's lives (she finds them charismatic and mysterious), and she begins a romance, her first love affair, with a seductive Brazilian boy she meets in one of her classes.

Some of these are people with painful secrets; others are people whose secrets inflict pain on everybody else. Tassie, our perceptive, bass-playing, Suzuki-scooter-riding heroine, stands at the middle of this unholy swirl, observing, reflecting and chattering with dauntless energy.

Before long, she wore me out. Moore is one of those writers we should theoretically be grateful for, a craftsperson who never wants to bore her audience, and for the first dozen or so pages of "A Gate at the Stairs," her patter is lively and entertaining. At first Moore's rat-a-tat puns and witty turns of phrase, her knowing banter, give her prose a sense of forward movement. Tassie describes the turn-on of being at school: "My brain was on fire with Chaucer, Sylvia Plath, Simone de Beauvoir. Twice a week a young professor named Thad, dressed in jeans and a tie, stood before a lecture hall of stunned farm kids like me and spoke thrillingly of Henry James's masturbation of the comma. I was riveted. I had never before seen a man wear jeans with a tie." A few sentences later, we learn that "In the corridors students argued over Bach, Beck, Balkanization, bacterial warfare." In those first few pages Moore, with gleeful abandon, jumbles bits and bobs from culture and academia (a professor of English at the University of Wisconsin-Madison, she knows the latter world well), and it's fun to be along for the ride. She tosses bits of trivia and minutiae around as if they were celebratory confetti. There are references to priest-children of an ancient Colombian tribe, bras with built-in padding made of oil and water, the experience of being turned away from trying to donate plasma because the potential donor had eaten cheese the night before, and the comforting-sickening feel of a cow's udder -- and that's all before Page 19.

But by the time Tassie starts waxing poetic about that udder -- "the intimate feel of her lavender-veined and hairy breasts had almost made me puke," she writes of the family cow -- her oversharing becomes less than charming. And that's when it becomes clear that "A Gate at the Stairs" is TMI fiction, a lavish, self-conscious layering of detail for layering's sake -- that is to say, much of it exists for show, instead of for the purpose of serving the story.

In the hands of certain writers, that approach can be OK. Not every writer has to be as direct and spare as, say, Elmore Leonard; lush detail and seemingly trivial digressions can be one of the joys of fiction. But Moore's prose ends up seeming more mechanical than free-flowing: It's an uneasy mix of jaunty and lavish. Moore does come up with her share of well-observed details, and her humor can be effectively cutting. At one point Tassie brings Mary-Emma, who is of mixed race, to the playground, and the mother of a white child approaches her and asks to set up a play date. "Maddie doesn't have any African-American friends, and I think it would be good for her to have one," she says. Tassie is only momentarily stunned into silence before blurting her response: "'I'm sorry,' I said to the woman, 'but Mary-Emma already has a lot of white friends.'"

Zing! That's Moore at her best. The most effective sections of "A Gate at the Stairs" deal with that kind of hypocrisy, particularly as it thrives among well-meaning liberals, people who want to do all the right things for the world and for their children only to be thwarted by their own lack of vision (or, to put it bluntly, by their own stupidity). But Moore wants "A Gate at the Stairs" to be emotionally rich, too, which is why she throws in a few wrenching twists, one of which is wholly unbelievable (it involves a judge assigning a very light sentence for a pretty ruthless deed), another of which seems too easy and facile (and hinges on an unanswered e-mail and the guilt it engenders).

It could be that Moore is simply trying to do too much. "Birds of America" was her most acclaimed book, and it was published more than 10 years ago; her fans have been waiting for a new book for a long time. (Her previous novels were the 1986 "Anagrams" and the 1994 "Who Will Run the Frog Hospital?") No wonder she's tried to pack so much in. When Tassie boards a plane, we get this observation about a random sign: "Contents may shift during the flight, we had been told. Would that be good or bad? And what about the discontents? Would they please shift, too?" Elsewhere, she ponders the fate of Sylvia Plath: "Oh, if only she had married Langston Hughes!" In a reflection that links Tassie's own mother, Plath and Sarah's impending motherhood, Moore gives us this sentence: "Motherhood like radar or radiation was radiantly in the air."

Moore isn't lazy. She has the exact opposite problem: This is a case of a writer's working too hard. She doesn't allow enough air around her sentences -- there's no space for the gags to breathe, and her brainy contemplations continue to stack up until they resemble piles of clutter. That surely isn't Moore's intent: Clearly, she wants to open us up to our own ability to feel. All writers are performers -- it would be disingenuous to pretend otherwise. But there's so much tap-dancing, sky-diving, bungee-jumping and unicycling in "A Gate at the Stairs" that Moore's greater goal just seems like an afterthought. Sometimes the best way to get from point A to point B is to simply walk.