Hell hasn't broken out in Iraq

Despite a recent uptick of deaths, the withdrawal of U.S. troops needs to go on 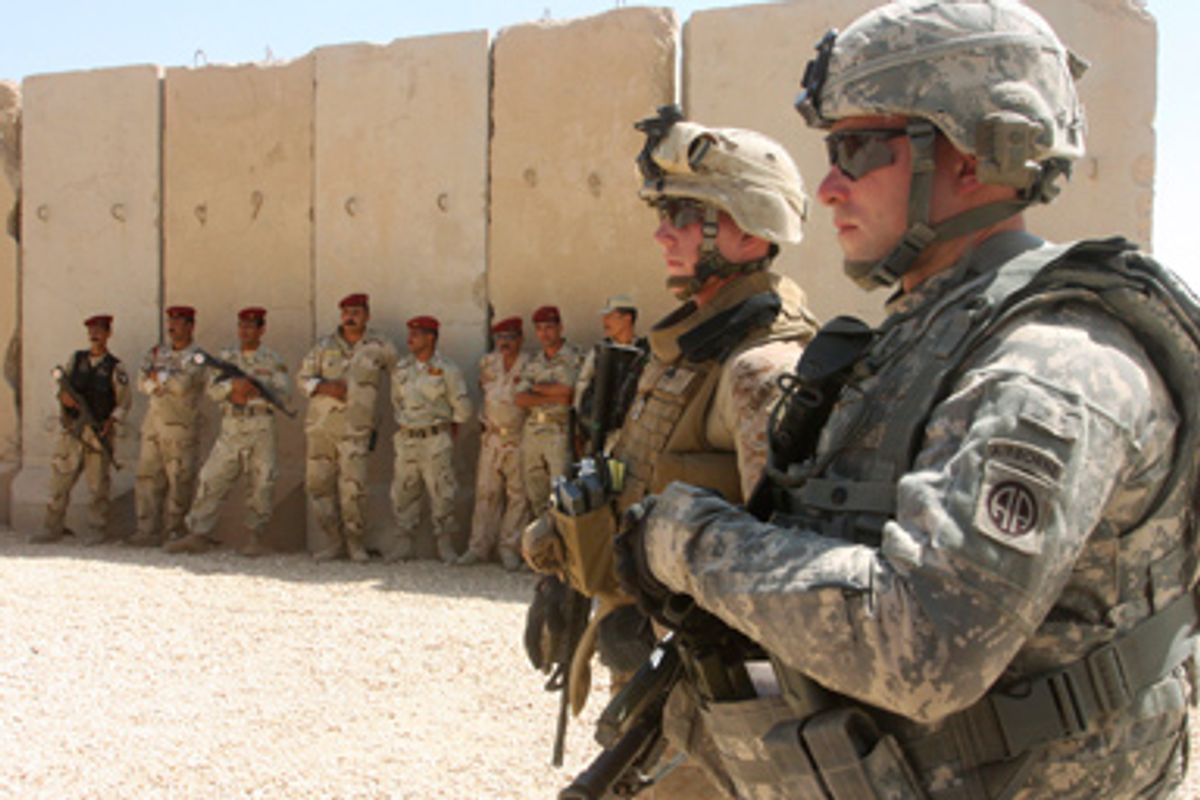 One of the major headlines out of Iraq today is the release of non-insurgent casualty figures for August, which are 456, as Agence France Presse reports. This was the highest monthly toll since July of 2008. I commend AFP on how it reported this story. Unlike a lot of other pieces, this one does not exaggerate the significance of August's figures and points out that there was also a surge of violence in June, when the U.S. military was still largely in charge of security, and when 367 Iraqi civilians and members of security forces were killed.

Some of the reporting takes the spike in deaths in August as a sign that Iraqi security forces are not prepared to maintain security in the wake of the cessation of American patrols in urban areas. I find this line of reasoning baffling and, to say the least, premature. One month doesn't make for a trend. In fact, in the month after the U.S. troops stopped routine patrols, both deaths and attacks fell by one-third. And if we average together the two months since the U.S. patrols stopped, the average monthly death toll was 340 or so, less than either June or April when the U.S. was in charge. Indeed, the U.S. was in charge in June of 2008, when the last spike as big as August's had occurred. Indeed, the U.S. was in charge in March of 2008, when nearly 1,000 people were killed. How is it then logical to say that the Iraqi military is doing a worse job than had the U.S.?

Moreover, the increase in deaths in August derived from two sorts of bombings -- those carried out against small heterodox Kurdish villages in the north, and those carried out against government ministries last Wednesday. The former would have taken place even if the U.S. military were still patrolling, since the Pentagon had few troops up north and did not patrol small Kurdish villages. The Baghdad bombings were admittedly made possible by the cockiness of Prime Minister Nuri al-Maliki, who had some checkpoints and blast walls removed, apparently on the theory that Iraqis were mainly attacking the U.S. in Iraq and would cease assaults on the Baghdad government if the U.S. agreed to withdraw. As al-Maliki discovered, the Sunni Arab guerrilla movements still have some vitality and they hate the Shiite government as much as or more than they hate the U.S. But now that this conclusion should be clear even to al-Maliki, presumably the checkpoints will go back up. Al-Maliki, frustrated by his error, attempted to blame Syria for the bombings of ministries, since Damascus had declined to extradite old-time Baathist Iraqis whom al-Maliki suspected of being behind the attacks. Turkey volunteered to mediate the dispute. Al-Hayat reports in Arabic that the Iraqi Foreign Ministry turned over to the Turkish mediator what Iraq feels is good evidence that last Wednesday's bombings were planned in Syria, and blamed Syria for hosting a radio station that broadcast insurgent propaganda.

Finally, although every human life is precious, the spike in August was small, up about a fifth over the toll in June, the last month of U.S. patrols. The decrease in July over June, of one-third, was much greater than the increase in August over June.

Of course, the increase of civilian deaths in August is not just a statistic, but has political uses, which is why I have to go to the trouble of pointing out otherwise self-evident things such as that one month does not make for a trend and that deaths aren't up that much on average since the U.S. stopped patrolling.

Prime Minister Nuri al-Maliki's political rivals inside Iraq have every reason to cast doubt on his ability to keep order, since his reputation for putting down lawless militias in Basra and Amara helped his Islamic Mission (Da'wa) Party do amazingly well in Baghdad and Basra in June's provincial elections. With a parliamentary election coming up early in the new year, a lot of posturing is going on in Iraqi politics. The new leader of the Islamic Supreme Council of Iraq (ISCI), Ammar al-Hakim (b. 1979) is pressing al-Maliki to join the Iraqi National Alliance, which groups Shiite religious parties. Al-Maliki has so far felt strong enough to resist these blandishments, but if he is robbed of security success as a platform, he might be forced into the INA to avoid taking a bath in the January elections.

Likewise, the statistic will be taken advantage of by American hawks who object to the Status of Forces Agreement negotiated by George W. Bush with the Iraqi parliament, and affirmed by President Obama, and which specifies that all U.S. troops be out of Iraq by the end of 2011. For example, Ken Pollack at Haim Saban's Center within Brookings. Pollack makes the odd argument that the U.S. needs to remain in Iraq to prevent it from falling back into civil war. But the civil war he fears will recur is the one fought in 2006-2007, while the U.S. military was occupying Iraq! If it could not prevent the first one, how could the U.S. military prevent the second one? He cites some political scientists who he says argued that postcolonial states have high rates of recidivism in falling back into civil wars once they fight one, and that this rate is only ameliorated by the willingness of former colonial powers to intervene. This crackpot idea ignores the ways in which the colonial powers set these places up for civil wars in the first place. And I can think of lots of counter-examples. Nigeria's civil war did not recur, and British troops have not gone back there. Indonesia's massive civil conflict of the mid-1960s did not recur, and Holland has sent no brigades back to Jakarta. And in many cases, where civil wars have been transcended it has been despite imperial meddling (Nicaragua and El Salvador come to mind), not because of it.

Pollack is still maintaining that Iraq is a democracy, even though he admits that the party-militias remain in control. This contradiction in his argument is fatal. Iraq is not now a democracy and has few prospects of becoming one. Iraqis have never even known for whom, exactly, they were voting, and it has been too insecure for politicians so much as to publicly campaign for office. Arab Iraq is a hellhole, devastated by U.N./U.S. sanctions and then by years of guerrilla war. Physicians, nurses and other professionals have fled. Some 4 million out of 27 million Iraqis are displaced, internally or abroad. What kind of nomadic democracy would that be? It is riven by ethnic conflict, and its massive petroleum reserves are both a source of extreme violence (as militias and tribes fight over smuggling rights) and a source of centralization (al-Maliki's control of the petroleum revenues is what has turned him into a strongman lite). It continues to be occupied by 130,000 foreign troops. Elections don't make for a democracy. In fact, al-Zaman reports today that the Shiite militias of the south are expanding their cadres and weapons caches in preparation for January's parliamentary elections. There is some anxiety that they are planning bombings and attacks before the elections to undermine al-Maliki's campaign platform of having brought security to the country.

That's the sort of democracy Iraq is. Washington-speak makes Lewis Carroll's "Through the Looking Glass" seem like minimalist realism.

What is most of all wrong with Pollack's argument is that he does not realize that the Iraqi masses will not put up with a long-term U.S. military presence in their country, and that they are organized enough and well enough armed to make any attempt to keep such a presence far too costly for it to be worthwhile or for the American public to put up with it (not to mention the sheer monetary cost, of $9 bn. a month, which the U.S. does not even have anymore). Likewise, Iran would not put up with it, and Tehran has the means through contacts with Iraqi militias to foil any such plans.

The project for a new American Empire is over, folks. The bombings and instability will go on in Iraq on a low-intensity basis. But likely the new Iraqi military can keep a minimum of order. There is a danger of Arab-Kurdish conflict, but it is highly unlikely that the U.S. military could do anything about it (just as it was helpless before the 2006-2007 Sunni-Shiite civil war, fought in back alleys and slummy neighborhoods). Luckily, although it is true that there are still 130,000 U.S. troops in Iraq, every evidence I can see is that Obama really is committed to withdrawing U.S. troops from Iraq on a relatively short timetable. The reason there are still that many U.S. troops in that country is because Washington wants to ensure that the parliamentary elections can occur in conditions of security. (The U.S. troops know how to effectively lock the country down for three days and interdict major attacks on polling stations, techniques it is not clear the Iraqi security forces have yet effectively mastered). No doubt part of the anxiety in the Pentagon is that Iran will try to pull off in the Shiite south the same sort of electoral fraud it did in its own recent presidential elections. In any case, I believe the U.S. really is pulling out, and that beginning shortly after the parliamentary elections next winter we will see very substantial troop movements out of the country coming down through Kuwait. Moving troops, by the way, is fairly easy and straightforward; it is heavy equipment that poses the challenge.

It is true that Iraq's instability and the possibility of ethnic strife is unfortunate, for Iraqis, for their neighbors and for the world. But Pollack should have thought of that before he put forward a rationale for a war on Iraq. The solution to this mess isn't more American military intervention.