A cake knife is useless in a gunfight 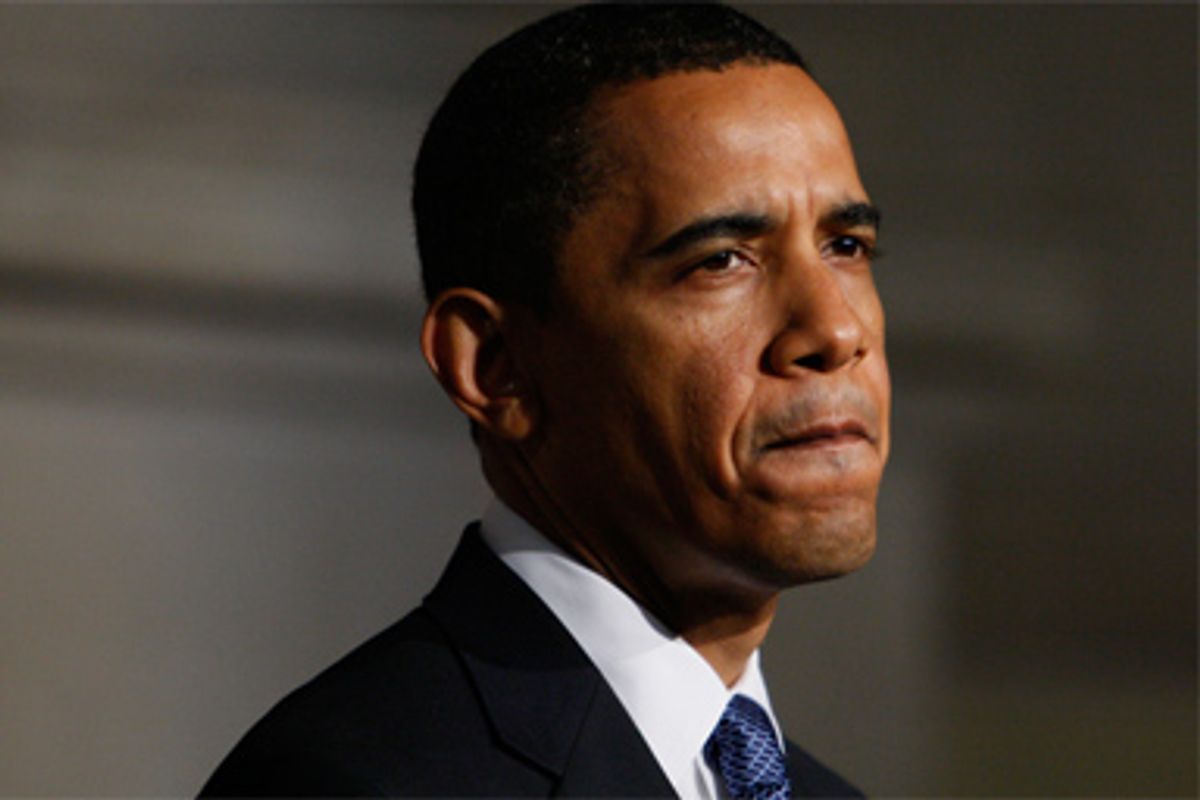 A cake knife is useless in a gunfight
--

If President Obama expects Congress to pass a healthcare reform bill worth signing, he'd better grasp that "bipartisanship" is a means, not an end. After eight years of cheering themselves hoarse over one catastrophic Bush blunder after another, Republicans will start dealing with reality only when they're afraid not to. Right now, it's their talk-radio/Fox News-hypnotized base that's got GOP congressmen running scared.

The White House ought to have learned from unanimous Republican opposition to the economic stimulus. "There's no question in my view that Bush was the most fiscally irresponsible president in the history of the republic," David M. Walker, Bush's own comptroller general, recently told the Washington Post. Now he tells us. After helping their hero literally double the national debt, GOP congressmen then became stern "fiscal conservatives" in the face of the worst economic downturn since the Great Depression.

Many knew better, but they also knew the White House had the votes. Striking poses cost them nothing. Stimulus money found its way into their districts anyway. Remarkably, Obama failed to get the message. Seemingly preoccupied with the president's image as a transformative figure, the White House keeps trying to negotiate with people who seek his political destruction.

On healthcare reform, Obama has mainly his own high-minded fecklessness to blame. To alter the cliché, he hasn't just brought a knife to a gunfight, he's brought a cake knife. The GOP's armed for war; he's showed up with a multilayered birthday cake of a bill hardly anybody understands.

Does being compared to Hitler annoy Obama? How can anybody tell? Did I say "bill"? Which bill? Only 37 percent of voters in a recent poll chose a correct definition of "public option" health insurance -- slightly better than random guessing. More Americans know the GEICO gecko. Hence many congressional Democrats are leery of proposals their constituents don't understand.

Even former GOP senator and presidential candidate Bob Dole tried to do the president a favor. "Obama's approval numbers would jump 10 points," he wrote in the Washington Post, "if Americans knew he was fully in charge." He urged the White House to introduce its own bill and fight for its passage. You won't hear this on TV, but Obama's slumping approval numbers reflect that many Democrats now worry he's a gutless wonder.

Historian Rick Perlstein ("Nixonland") made a crucial point in an online exchange with readers frustrated by voters falling for crude GOP disinformation.

"You can't 'demand' that people be more logical. Emotion is part of the human animal," Perlstein wrote. "What I would have liked to have seen, as an advocate of healthcare reform, is for Obama and the rhetoric to combine rational appeals with emotional ones -- like FDR and Truman and LBJ did so effectively in their own attempts to pass progressive legislation. They roused people in their lizard-brains, too, just for progressive ends ... Truman made arguments in a very blunt, emotional style."

Indeed, here's Truman whistle-stop campaigning during the 1948 election, a contest he began considerably further behind than Obama's health-insurance reforms: "Selfish men have always tried to skim the cream from our natural resources to satisfy their own greed. And ... [their] instrument in this effort has always been the Republican Party."

Always distinguishing between Main Street GOP voters and Washington grandees, Truman lashed out at "Wall Street bloodsuckers" who kept the common man down. Granted, Truman's rhetoric strikes many contemporary ears as crudely anti-intellectual. Also, Democrats have gotten halfway into bed with Wall Street. Reluctance to offend the tender sensibilities of insurance and pharmaceutical company executives, however, has put the White House on the defensive and kept it there.

Confident that the 2008 election put the brainy people back in charge, many Democrats don't appear to know what's hit them. After I wrote a recent column pointing out that calling people dumb racists was a lousy way to win them over, many readers expressed outrage. To hell with rednecks and to hell with me.

OK, fine. Knock yourselves out. But do you want to win this fight or express your moral superiority? My state's two Democratic senators need reasons to support what many of their constituents fear, and the most persuasive voice many are hearing is Rush Limbaugh's. This is true across large parts of America where left-wing populism once held sway.

Careful technocratic arguments won't cut it. For more than a generation, the well-organized, extravagantly funded, right-wing noise machine has steadily grown in power while liberals have deemed themselves too sophisticated to fight back. There was actually a recent Columbia Journalism Review article arguing that "mainstream" media can best counter disinformation like "death panels" by simply refusing to report it.