My cheap, fast and effective treatment in New Delhi reminded me of everything wrong with American healthcare 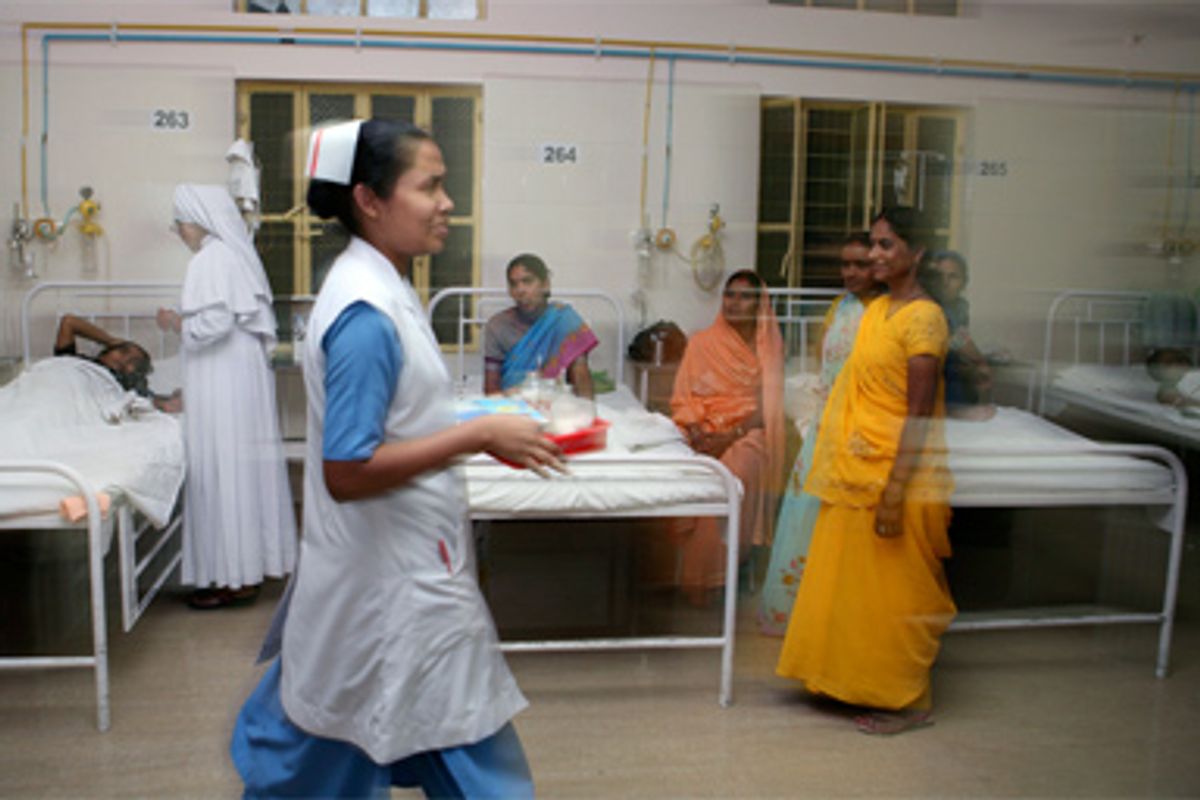 A nurse carries a tray to examine patients in an indoor ward at Nazareth Hospital in Allahabad, India, Sunday, May 11, 2008.
--

I moved to New Delhi a year and a half ago from New York for a new job with a newspaper. When I arrived in India's capital, I figured if I was going to live in the country, I might as well get used to the food, the water and the bacteria that doesn't seem to bother too many natives. I ordered juices, ate cold salads and drank the un-bottled water that restaurants bring customers for free. But I learned the hard way there are better methods for adjusting your body to the new climate. Less than two weeks into my time there, I found myself vomiting at the foot of a 12th century monument, the Qutb Minar.

I had anticipated getting sick in India. Since I had elevated carelessness to the level of doctrine, I had almost guaranteed it. But it was something I hadn't prepared for. I had no idea how to navigate the Indian healthcare system. How would I find a doctor? What if I had to go to the hospital? How different from the American system would it be?

What I hadn't anticipated was that India's treatment would turn out to be so good. And cheap. Unless you happen to be one of the hundreds of millions of Indians who are poor and don't live in a major metropolitan area. The Indian healthcare system is an anarchic hodgepodge, with little insurance, little regulation and a range of services offered by hundreds of government-run, trust-run and corporate hospitals. The care it produced for me was fast, effective, courteous and cheaper than American medicine, even when adjusted for the lower cost of living. But that was the care it produced for me, a middle-class woman in the big city. As America considers healthcare reform, the Indian system is a testament to both the triumphs and the pitfalls of letting the free market heal people.

At first I fought the suggestion to visit a doctor with my stomach bug. I rested and didn't eat much for a few days, hoping it would disappear on its own, like stomach bugs tend to do. I thought that making an appointment, and waiting to see a doctor, and getting ahold of any medication in India, would take more time than just getting better on my own. After all, it took almost 17 hours of phone calls and store visits, and two instances of crying hysterically to customer service reps, for my cellphone to work. If just getting a basic telephone connection was so much effort, I didn't want to think about what a visit to the doctor would be like. But after the third day of diarrhea, and continued inability to eat anything without being hit with an overwhelming wave of nausea, I caved. "OK, let's call a doctor," I told my friends who were taking care of me.

It was about 9:30 in the morning. My friend, who works for an outsourcing firm, called a gastroenterologist -- not a general practitioner but a specialist -- and set up an appointment for 10 a.m. We drove to the hospital, a mile away. It looked brand-new; the floors were shiny and everything glistened. The staff was courteous and the whole place was quiet. The doctor called me in at 10:02. He diagnosed the problem as a bacterial one, gave me a list of what to eat and prescribed a course of antibiotics. The pharmacy counter where I could pick up the drugs was just outside his office. The cost to see the doctor? $6. The pharmacy bill was about $1. Total cost, $7, with no insurance company involvement whatsoever.

Before I left New York, I had spent $20 just on a copay to visit a doctor and get a blood test done, another $20 copay to pick up the test results, and a third $20 installment for a tetanus shot. That was $60, plus whatever my insurance company paid, just so I could get a clean bill of health.

A couple of weeks after my first encounter with an Indian doctor, I had another bout of stomach problems. This time, it was probably a glass of watermelon juice that did me in, and the next morning, I couldn't even keep water down. We called the same doctor on his cellphone, and he prescribed the same antibiotic. When I threw that back up, we called him again, and he said to try a more powerful anti-vomiting drug. We called the pharmacy, which delivered the drugs for free.

It worked, for the most part, but when nausea was still bothering me a few days later, I paid another $4 visit to the doctor. He told me to go to a lab down the street from his hospital and have a blood test and stool sample done. I went in without an appointment and walked out 20 minutes -- and $20 -- later. That afternoon, I picked up the results and read them to my doctor over the phone. The liver function test came back a little high, so he said to take it easy and go back two weeks later for the same tests. I did, and the levels were almost down to normal. The phone calls were free.

Even emergency care in India seems to work along the same lines. The same friend who first called a doctor for me had been in a horrific car accident about eight months before I arrived. He was taking a right turn at 2 in the morning when a truck came from the opposite side, ran into his car and just kept going. His femur was broken like a twig, as were his collarbone and wrist. His lip was split and his nose was hanging off his face.

Two months and a few surgeries later, he walked out of the hospital. He walks now without any aid and has had no major complications. The total bill, paid by his Indian insurance company, was less than $10,000. A similar accident in the U.S. would run up a $200,000 bill and bankrupt almost anyone who didn't have health insurance.

How is this accomplished? Largely through supply and demand. Almost 25,000 doctors graduate from India's medical schools every year. Because there is so much competition, doctors and hospitals are forced to keep their prices low to get patients. Residents, who go to medical school straight from high school, only make the equivalent of a few hundred dollars a month. An average surgeon's salary would be around $8,000 per month. The take-home pay to fix a hip fracture, for example, might run between $100 to $300, out of the $1,000 fee to the patient, says orthopedic surgeon M.S. Phaneesha. At his hospital in Bangalore, he says, there are 20 orthopedic surgeons alone on staff. For 1,600 beds, the hospitals employs around 700 doctors full-time; 300 of them are surgeons. In the U.S., by comparison, a first-year resident might take home around $2,500 each month, and the average surgeon more than $20,000 per month. A hip fracture would cost a patient around $30,000, of which the surgeon's charge is $5,000. Even general practitioners in America earn on average more than $100,000 a year.

Another factor in India's costs is the tiered system of beds that most hospitals employ. One night in a general ward at the private Artemis Health Institute in a New Delhi suburb, for example, costs around $20 per night. One night in a single room, or a deluxe, or a suite, though, will cost you between $100 to $200. Services are similarly tiered. A general ward patient at Artemis would only pay $2 for an X-ray, while single-room patients would pay more. There are so many hospitals, says Artemis' chief operating officer Jose Verghese, that rates at the lower end stay low.

Unsurprisingly, for the urban middle class, says Ajay Mahal, who teaches international health economics at Harvard University's School of Public Health, finding medical care isn't a major problem. Referrals through friends and family work as a check on quality. And in general, those in the middle class, like my friends, are connected enough to find the best private doctors.

But this type of care isn't available to all Indians, since the average income in the country is still around $65 per month, and more than 300 million Indians out of a population of 1.2 billion still live on less than $1 per day. The poorest residents, just as they do in the U.S., often skip out on expensive treatments, and visit doctors only in serious situations. They do have access to free top-tier government hospitals for serious medical conditions. The national government and some state governments are trying out models to cover medical costs for its poorer residents, such as paying for certain surgical procedures or providing yearly vouchers that cover around $600 in expenses, to mixed results. Only 8 to 9 percent of Indians even have private health insurance, so most expenses are paid in cash, by the patient.

And about those doctors: Only a handful are from reputable institutions, explains Mahal. Quality of care varies throughout India, and is a big concern in smaller towns, where the more questionable institutes are based. But it is also a concern in the big cities. The sheer number of doctors is one of the main downward pressures on healthcare prices, but it's a good thing I had the name of a good doctor and didn't wander in off the street to the offices of a poorly trained M.D.

In some ways, the Indian system is like the U.S. system before the spread of private insurance -- that extra layer of bureaucracy is still not a major factor in Indian healthcare costs. Private insurance costs help explain why the U.S. spends a greater percentage of its GDP on healthcare than the European democracies. The Indian system of health insurance also works differently, in a way that holds down costs. Those Indians who do have private insurance pay their bills out of pocket -- to doctors who don't charge much because of all the competition -- and then get reimbursed. The insurance companies aren't the ones setting the rates or acting as the middle man.

In other ways, the Indian system is like the current U.S. system, except writ very cheap and very large. Just as in the U.S., healthcare is better the bigger the town, the bigger the wallet. It is out of reach for the poorest segments of both populations because of simple economics. Both governments have partial safety nets -- though public costs are a far smaller percentage of GDP in India and a smaller portion of all healthcare spending.

There are also some differences that seem largely due to culture. A tiered system of care might be untenable in the U.S., where more patients have insurance and everyone expects the best available care. There is also a different expectation and feel to the actual doctor visits. Raj Sringari, the surgeon who treated my friend, and who also practiced in the U.K. for seven years, says the Indian doctor-patient relationship is an extension of a culture built around social visits. "If you want to see a doctor, he is available from 9 in the morning till late in the evening. A patient can walk in, and if the doctor is free, he is happy to see you."

By the way, in July, I moved back to the United States. I bought travel health insurance from Tata-AIG, which is available to anyone who has spent at least six months in India. I'm covered for three months, up to $200,000 in expenses. I paid $100 for it. When it expires, I will likely get health insurance from Blue Cross. It will cost more than $500 per month.