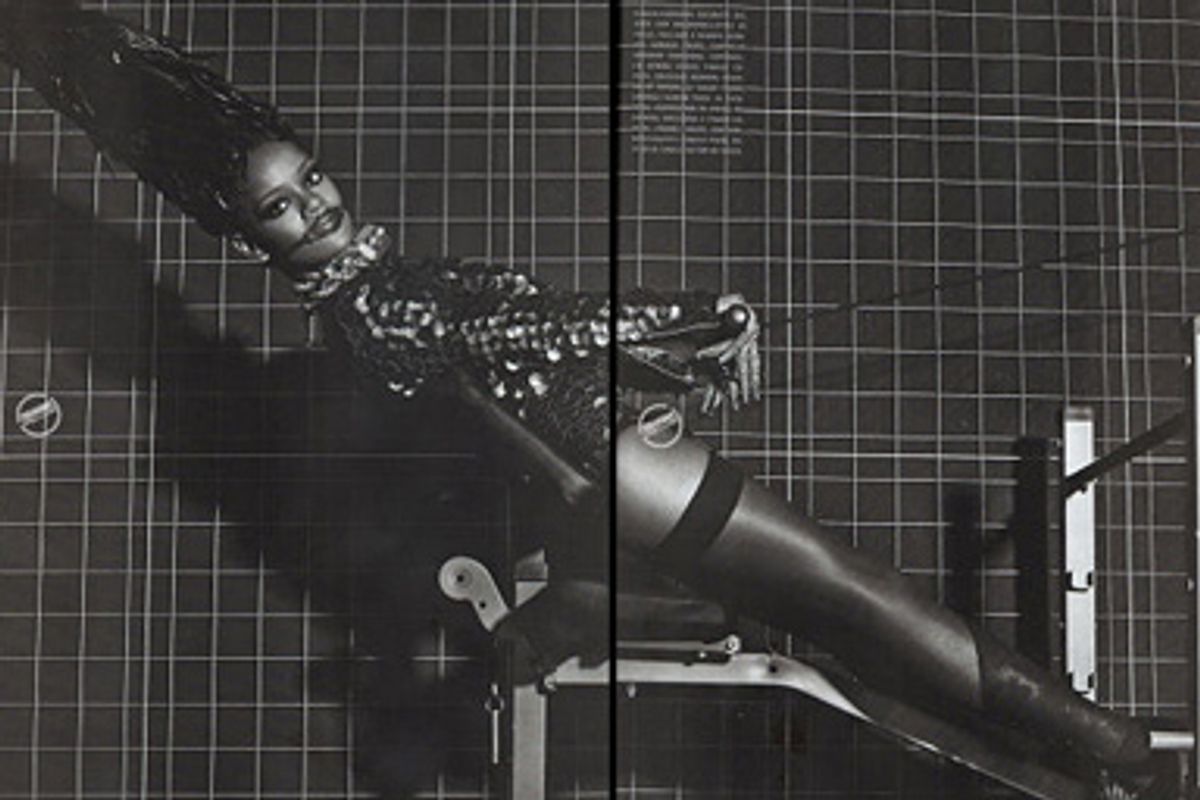 In the September issue of Italian Vogue, cover model Rihanna -- the pop star most recently famous for the beating she received at the hands of then-boyfriend Chris Brown -- poses for a photo wearing a lip-shaped gag. Another shot shows the singer half-naked, with only a pair of pasties to cover her nipples. I have to admit, my first thoughts, as I paged through the images, were of exploitation. How could Vogue have asked a domestic violence victim to be photographed in bondage gear? And how could Rihanna have allowed the magazine to turn her ordeal into a kinky, controversial spread calculated to sell copies?

But maybe this wasn't about exploitation at all -- or, at least, not primarily. In fact, photographer Steven Klein's images seem constructed to make Rihanna look powerful. These are stark, gothy, '80s-inspired shots, all clean lines and sharp angles, and all but one is in black-and-white. In what the Huffington Post refers to as Rihanna's "topless" shot, the singer stands tall and proud, holding what looks like a riding crop and wearing an enormous black coat, her pointy, manicured fingers resting confidently at her hip. While another image has her on all fours, Rihanna's spiked hair and steely eyes insist that she's no victim. Even the meaning behind the gagged shot is ambiguous. I mean, there's no getting around it: The woman who stayed mum throughout Brown's trial is certainly muzzled. And, honestly, I'm not sure what kind of apparatus she's perched on there; it could be Pilates equipment or a supersize BDSM toy. But Rihanna is also staring straight into the camera, defying us to judge her.

Which brings me to another good question: Who am I to judge whether Rihanna's behavior is appropriate for a domestic violence survivor in the first place? Even if she wanted to appear in a magazine made up to look bruised and beaten, do we have a right to criticize that decision? There is no formula for bouncing back from abuse.

But these strange, beautiful photos -- and my visceral reaction to them -- do make me wonder when Rihanna will get her career back. I'm not asking when she'll start churning out more platinum albums. After all, she's still a popular singer. And it is, of course, Chris Brown whose chances at a comeback seem slim. (In fact, I expect questions about his future will come up Tuesday night, when Brown appears on Larry King.) But what I mean is, when will we be able to stop seeing Rihanna as a domestic violence victim and let her resume her identity as the singer who brought us such carefree hits as "Umbrella"? As Tracy Clark-Flory argued in February, Rihanna can choose to be the poster child for domestic violence victims, the way Tori Amos was for rape survivors in the '90s. Or she can make a big, Tina Turner-style show of her newfound freedom and empowerment. But the point is: She doesn't have to do either.