Orly Taitz is at it again 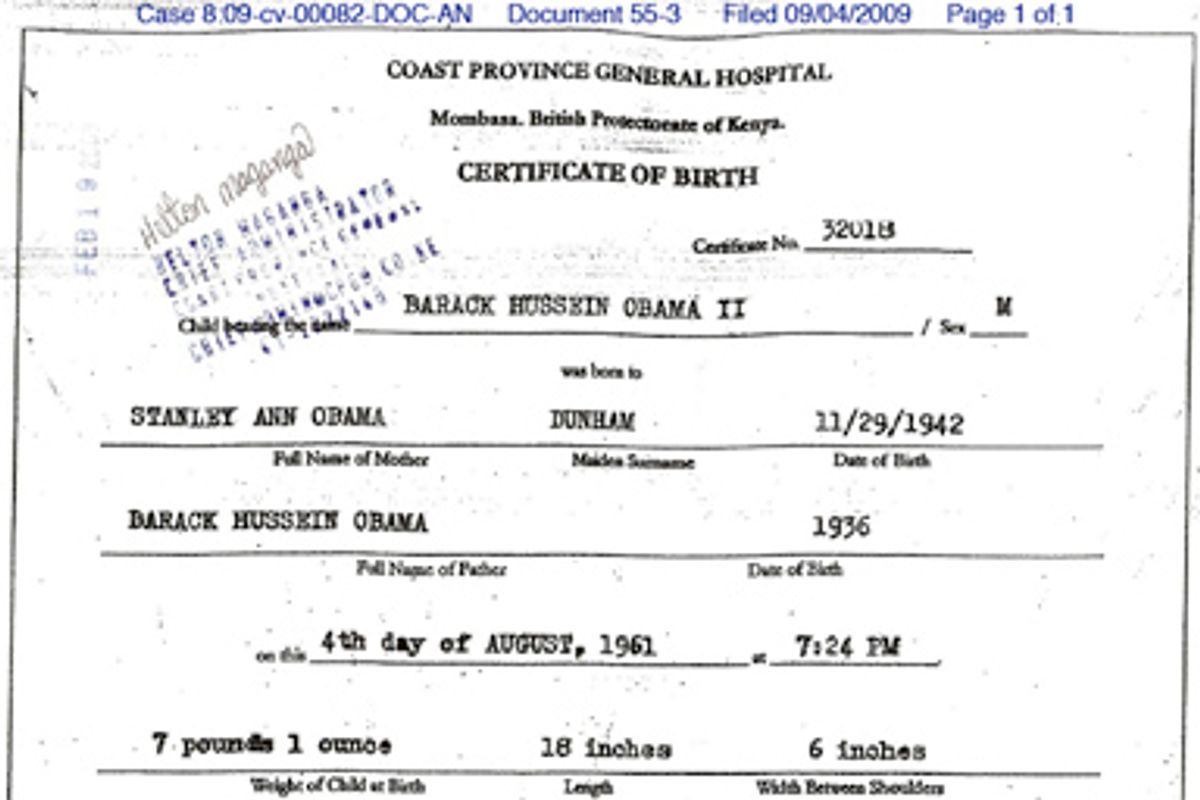 You can't stop Orly Taitz, you can only hope to contain her.

Yes, the de facto leader of the Birthers is back -- and she's brought along a second forgery (visible above) that purports to be President Obama's real birth certificate, proving once and for all that he was born in Kenya and is ineligible to be president.

As was also the case with the first forged birth certificate that Taitz tried, unsuccessfully, to introduce into a lawsuit in which she's representing Alan Keyes and several other plaintiffs, this new document is a pretty obvious hoax.

It's so clearly fake, in fact, that Jerome Corsi of World Net Daily -- one of the chief promoters of the Birthers and their myths -- has already debunked it. Taitz apparently obtained it from one Lucas Smith, who'd previously made several aborted attempts to sell it on eBay. Corsi claims that Smith has "a lengthy criminal record" and once "attempt[ed] to sell his kidney to a man in need of an organ transplant."

Among other obvious problems with Smith's document that Corsi pointed out is the format for dates used in it -- the American style, not the British style, which presumably would have been used when Kenya was a British colony, as it was at the time of Obama's birth.

The biggest issue with the document, though, is that its header reads "Mombasa, British Protectorate of Kenya." In 1961, when Obama was born and this certificate was supposedly produced, Mombasa was a part of Zanzibar. (The claim of birth in Mombasa is illogical anyway, given where Obama's family lives in Kenya, but it's become part of Birthers' conspiracy theories because the city is in one of the more Muslim parts of the country.)

The lawsuit in which Taitz is representing Keyes might not last for much longer, anyway. Now that the lawyer-slash-dentist has finally served the defendants in the case properly -- it took her about half a year -- the U.S. Attorney's Office for the Central District of California, which is charged with the defense, has filed a motion to dismiss. There'll be a hearing on it in early October, and given Taitz's track record so far, the chances of the case surviving that hearing seem very slim.

Not to worry, though: She's already begun another case, this one on behalf of a flight surgeon who says she shouldn't be deployed to Afghanistan because Obama might not be the legitimate president. This isn't Taitz's first try at this tack. A previous case she filed with a military plaintiff ended when the Army simply revoked his orders, as the man had actually volunteered to be put on active duty in the first place, apparently so he could sue. This isn't even Taitz's first attempt with this particular suit; it was thrown out of federal court in Texas, so she's trying again in a federal court in Georgia.

Of course, Taitz says, there's one easy remedy, one way to satisfy her and make the lawsuits stop. In the latest complaint, she writes:

All that is asked of the President is that he humbly acknowledge and produce his true and complete "original" birth certificate, and that he then confirm and acknowledge that, no matter where he was born, he cannot be President because one of his parents (Obama‘s natural father) was not a US citizen at the time of his son‘s birth.

Yes, all Taitz wants is for the president to acknowledge publicly that he's a fraud and resign in disgrace. No big deal.

Naturally, though, she's wrong about the law. Despite what the Birthers think, there's no definitive judgment saying that to fulfill the Constitution's requirement that the president be a "natural-born citizen," both of his or her parents had to be U.S. citizens at the time of the president's birth. In fact, common law and court precedent points in the other direction.