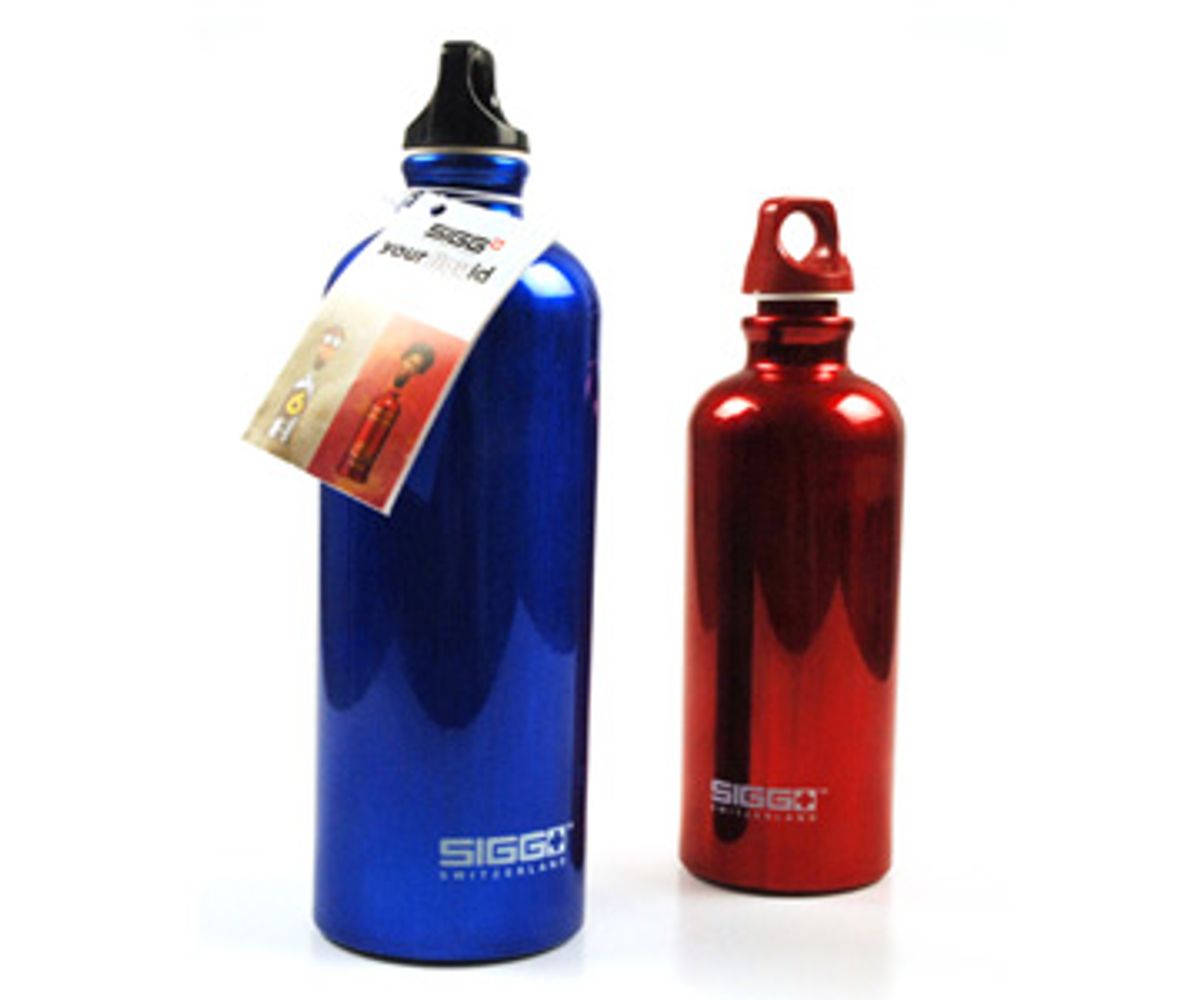 How did water become so difficult? There's the question of tap or bottled, Brita-filtered or Fiji-imported, still or sparkling. Tap water may contain deadly impurities like lead, but bottled water is often just tap water in fancy packaging -- not to mention that the vast majority of plastic water bottles end up in landfills, where they'll remain for thousands of years into the future. And from a political perspective, what we drink has even been partially linked to helping to prop up repressive governments.

And all of these factors make a recent controversy about reusable water bottles all the more messy. Last week, SIGG Switzerland, the makers of popular aluminum reusable water bottles -- a must-have accessory for the fashionably eco-friendly set --  admitted that prior to August 2008, their bottles contained the chemical Bisphenol-A (BPA). Why is this a big deal? Well, for one, SIGG sales have dramatically increased in the past few years in the wake of news that hard plastic reusable water bottles like those made by Nalgene contained the chemical. Used in not just water bottles, but toys and cans as well, BPA can leach into liquids and may pose health risks. BPA is classified as an endocrine disruptor and in scientific studies, even small amounts of BPA have been shown to seriously impair the hormone, brain and reproductive function of some animals.

Thus, it's ironic that many eco-conscious consumers switched to SIGG bottles when they found out that Nalgene's old bottles contained BPA. While SIGG never said their bottles were BPA-free, they also did not correct the misconception that their bottles didn't contain the chemical. It's led to direct charges that SIGG profited off of keeping consumers in the dark. The announcement has already led one retailer, Patagonia, to severe its relationship with Sigg.

In an apology to consumers posted on the company's website, SIGG's CEO, Steve Wasik said, "I am sorry that we did not make our communications on the original SIGG liner more clear from the very beginning." Wasik continued:

I have learned much over the past 2 weeks. I learned that many of you purchased SIGG bottles - not just because they were free from leaching and safe - but because you believed that SIGGs contained no BPA. I learned that, although SIGG never marketed the former liner as “BPA Free” we should have done a better job of both clearly communicating about our liner as well as policing others who may have misunderstood the SIGG message.

SIGG is now running an exchange program in which consumers who feel they've been misled or who want a bottle with a new, BPA-free liner, can exchange their old bottle in for a new one. However, consumers have to front the cost of postage to send the bottle back to SIGG. You can also exchange the bottles at retailers like Whole Foods or REI, though as one frustrated eco-writer points out, "In keeping with Sigg's corporate transparency policy, this fact does not appear on their site: the reporter had to get it directly from the company's president himself."

If anger from being seemingly misled by SIGG has led you to want to try a different breed of water bottle, there are a variety of BPA-free bottles now on the market. In the meantime, before you reach for the next glass to quench your thirst, here's a look at the angry reaction of SIGG's BPA laced bottles from across the Web.

At no point over the last few years, in the handful of conversations and email exchanges I have had with SIGG's PR company Truth Be Told, were my perceptions that the bottles were free from BPA corrected. For the record, I don't think I said they were BPA-free but that's really not the point, is it? You trusted me to tell you the truth. And I did, to the extent that I knew it. And Truth Be Told did, too, to the extent that they knew it ...

Although asked, I have never signed on to be a spokesperson for a product because I believe it compromises my integrity as a journalist and environmental advocate ... Any product that has earned my praise has done so on its own merits. SIGG was one of the very few companies I chose to discuss by name ... Today, I am telling you that I am deeply sorry for leading you astray. Had I known better, I would have used -- and promoted -- BPA-free alternatives from the onset.

This is greenwashing at its worst. Sigg rode a wave of growing concerns about BPA, selling lot after lot of its products to people who believed they were reducing the risk of exposure to BPA by switching from reusable polycarbonate plastic drinking bottles.

Then, in order to tout its new BPA-free product (as many of its competitors already are doing), Sigg copped to the presence of BPA in its older products, and asked customers to take its word that testing (paid for by the company) confirms that the old linings don't leach BPA.

As much as I admire Sigg's hip graphics and commitment to weaning us off throwaway water bottles, I won't be sending in my old Sigg bottle for a replacement. Why should I condone corporate doublespeak or claims of "proprietary" business information that conveniently cloud the facts?

Instead, I'll be applying the cost of postage to the purchase of a BPA-free product from one of Sigg's competitors.