Private room, only 11 grand a night

Hospital expenses could crush the average family. Isn't it cheaper to make sure everybody has a decent health plan? 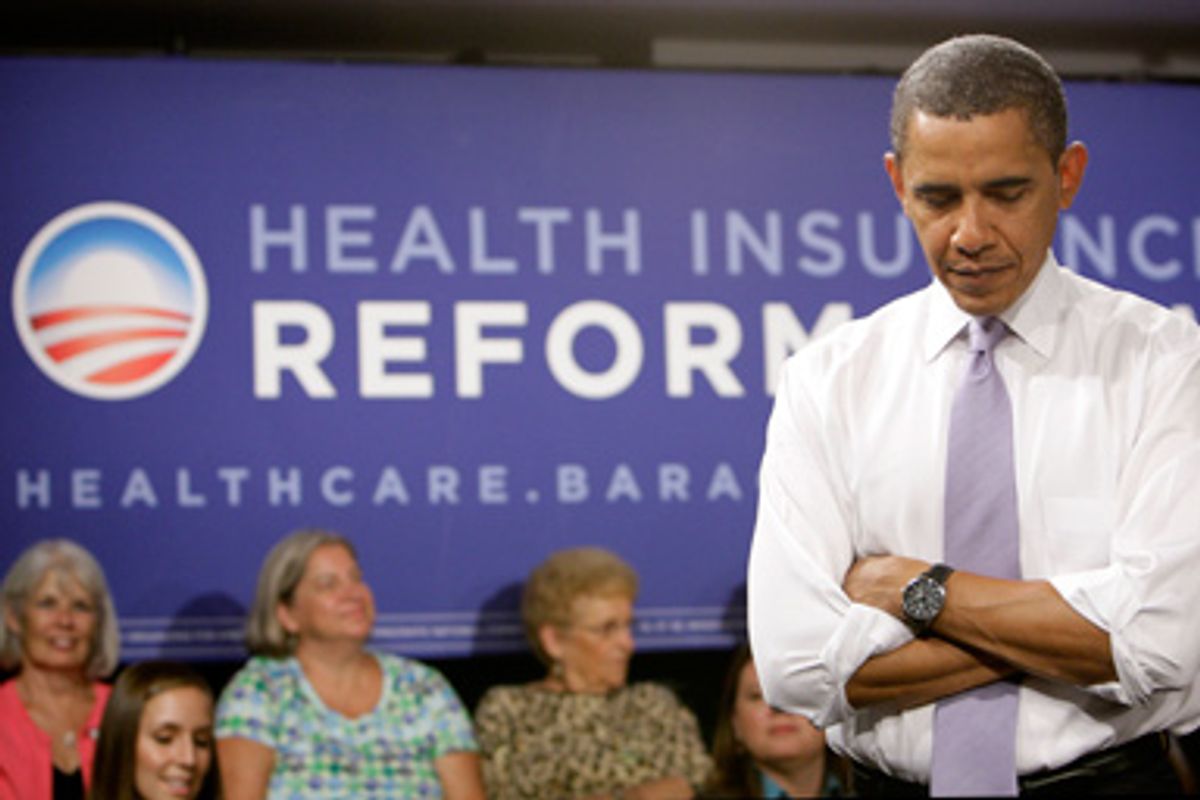 It's easy to get distracted by the vaudevillian aspects of the healthcare debate.

My favorites are the few beet-faced droolers who show up at town-hall meetings to rail against government involvement, while simultaneously warning President Obama to "keep your hands off my Medicare" -- the biggest, costliest, most socialistic government program in U.S. history.

It's also a program that happens to work, although not nearly as efficiently as it could.

Nobody with an IQ higher than emergency-room temperature could ever believe that "death panels" would be appointed to nudge the elderly toward euthanasia. Yet for idle entertainment, it's hard to beat Sarah Palin's ignorant nattering on the subject.

"I think the critics have approached this in the wrong way; saying there's to be a death panel is not the right way. The right way to approach it is to put the burden of proof on the administration -- tell us how you're going to do (reform) without denying care to people who are really in need."

Once the volume is turned down at the town halls, you can hear plenty of smart, hard questions about the direction of healthcare reform, and the implications for families, businesses and medical providers.

Anyone who's been in a hospital knows the cost of care is so insanely high that, without some form of coverage, many people would find themselves pauperized by a health crisis.

A close member of my family recently had an accident in which she suffered multiple bone fractures and a partially collapsed lung -- painful, but not life-threatening.

She was taken to the nearest hospital, where she was monitored for a few hours in the intensive-care unit before being sent to a private room. The next day, she was transferred to a hospital closer to home.

The bill, which wasn't itemized, didn't arrive for two months. It had first been sent to our insurance company, which covered most of it. The remaining balance was, relatively speaking, small change.

I called the insurance company and said that, while we greatly appreciated the bill being paid, it was difficult to comprehend how those particular 24 hours of medical care could cost more than 11 grand.

The woman taking my call patiently checked over the bill on her computer. She said the hospital room itself was "only" $750. The bulk of the charge was for two CAT scans, totaling more than $6,000.

I couldn't resist mentioning that my family member had suffered a broken fibula, which, despite all the tests, had somehow escaped detection at the hospital.

"They didn't even X-ray her leg," I pointed out.

Hoping to make me feel better, the woman at the insurance company said, "Well, we didn't pay out the full $11,392." The hospital bill had been adjusted downward, she said, to slightly less than $10,000.

Such formidable sums are no shock to those with experience on either end of the healthcare delivery system. Our family is fortunate because the company I work for offers a pretty good insurance package at a reasonable cost.

Nobody knows for sure how many Americans don't have medical coverage, but the most frequent estimates range from 43 million to 47 million. Some carry no insurance by choice, but the majority simply cannot afford it.

We've already spent more on Iraq than the Democrats' current healthcare plans are projected to cost over the next decade. Yet some of the same bright bulbs in Congress who were excited to bankroll that foolish invasion are now huffing indignantly about the price tag for insuring our own citizens.

Reform can't work without including the uninsured, not just because it's humane but also because it will ultimately save taxpayers a fortune. The public cost of treating uninsured patients, who often don't see a doctor until there's an emergency, is boggling.

If a single day in the hospital can cost 11 grand (or more), the tab for staying a week or a month could crush an average family. Whether a patient is uninsured or underinsured, if he or she can't write the check, the rest of us will.

That's one reason hospital expenses are so astronomical -- we're subsidizing a sick, bloated system. It would be far cheaper to make sure everybody had a decent health plan.

In medicine, there's really no such thing as an unpaid bill. Somebody always gets stuck.