Tyra Banks takes it all off

The talk show host tossed her weave for the first time. Is embracing the state of black hair the new liberation? 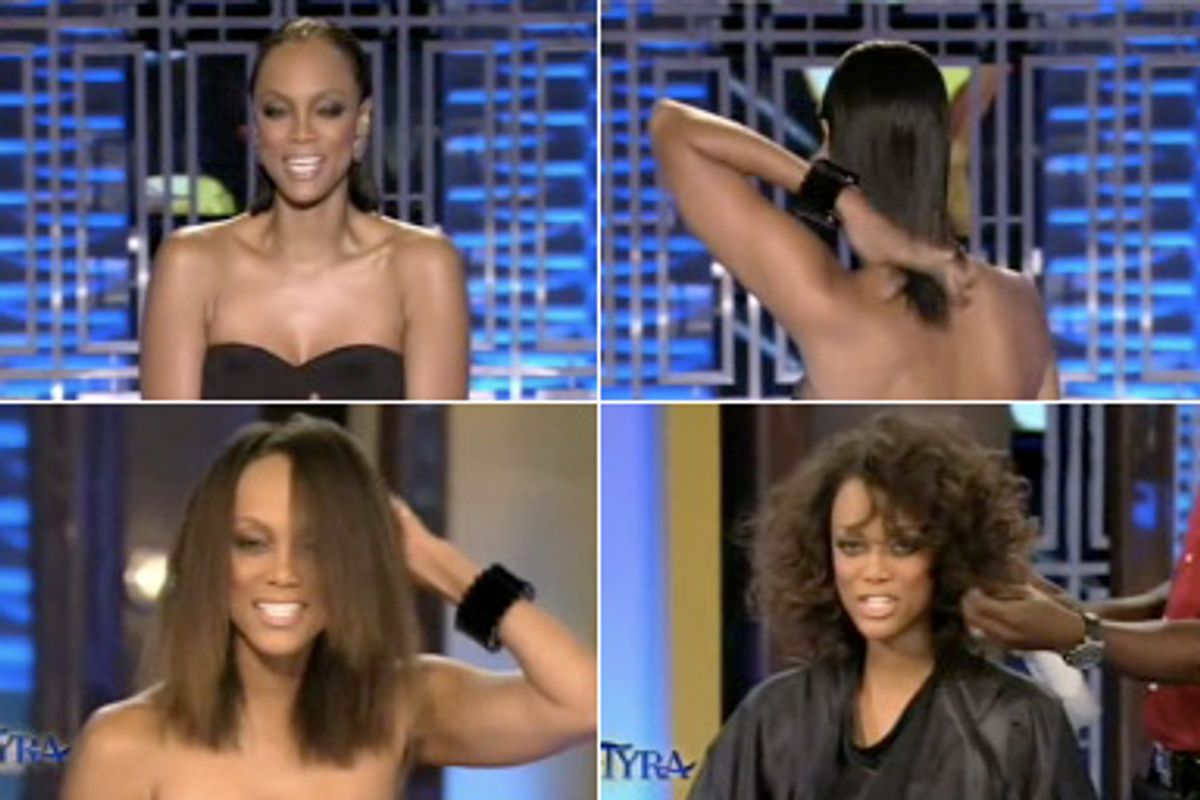 Thanks mostly to the intense physical scrutiny of Michelle Obama, black hair is now a subject suitable for public consumption. Well, almost. For the last year, big media's been creeping rather awkwardly up to that point and now seems ready to take words like "pressed" and "processed" out of the black particular and move them into a more permanently accessible cultural space; both Time and the New York Times Sunday Styles section recently ran sober pieces on the social history and multiple meanings of black hairstyles. Meanwhile, black people have been almost forced into a new mode of self-reflection about workaday rituals they assumed were of interest to no one but themselves. (See Chris Rock's upcoming "Good Hair," an unironically titled documentary that profiles the lucrative but little-observed industry that black hair care has been for well over a hundred years.)

The latest example of this cautious coming out was Tyra Banks inaugurating the fifth season of her eponymous talk show on Tuesday with "Hair Liberation Day," in which she promised to appear minus any flowing weaves, clip-ons and wigs that she has professionally never been without (watch a video clip here). She delivered on that promise -- the hair was indeed weave-free and, compared to the cascading looks of the last 10 years, downright minimalist. But Tyra pulled a rare punch. The hair was all hers, all right, but it was still straightened in the manner of lots of black women's hair, including the first lady's. And when Tyra's stylist got through with it, the supermodel emerita had a cloud of shoulder-length curls that was technically more ethnic than a weave, but as "done" as any 'do she's ever sported. A change? Certainly. Pretty? For sure. Revolution? Not hardly. Black people may be getting more honest about their hair habits, but that doesn't mean they're ready to go cold turkey. Can't get too crazy now.

This was a letdown to those of us who were hoping Ms. Banks would show the way back to natural hair -- that is, curly-to-kinky black hair not beaten into submission with chemicals or straighteners. My letdown peaked into indignation when Tyra urged one black woman “challenger” on the show who confessed to hating her nappy, natural hair to chuck the weave to which she had become almost psychologically addicted. The chastened woman joined Tyra on stage -- with real hair that was a bit shorter than before but straight and shiny as glass. The stylist declared it beautiful, while the audience applauded and Tyra praised the woman for beating the demons of racial self-hatred. Really? That must be another show.

Of course I was expecting too much. The latest Tyra event was a mere gimmick, another top-this move typical of the overheated talk show/reality show/extreme-makeover circuit. But the drama surrounding the scaled-back look of a black celebrity, underwhelming though it turned out to be, did speak to something genuine. The constant critiquing of the Obamas' looks, from Michelle's shorts to the girls' braids, has black people thinking harder about an old racial wound that's never gone away: the tyranny of beauty standards. White people talking about black hair practices now doesn't mean we're giving those practices up -- when the dust from the black-power '60s and '70s settled, the hot combs and hair grease were still around -- but we are talking more frankly about them and what they represent. There is a very practical reason for black women to liberate their hair in 2009: money. The cost of maintaining weaves and other hair enhancements, considerable in any era, is especially prohibitive in a recession. It also helps that the blinged-out, ghetto-fabulous looks of the '90s and early aughts -- weaves, colored eye contacts -- seem to be finally running their course. The Obamas are adding a welcome new definition to the tired black descriptive, "urban," and it's about time; long defined by image extremes, blacks are now in a mood to champion image moderation.

There is some leftover '60s mojo in all this. No, the Obamas and Tyras of the country are not the poor or oppressed who raised their fists 40 years ago. But the black middle class has gotten beat up, too. Ongoing conservative backlash has killed affirmative action and dried up any empathy for the inner cities and ghettos from which the black middle was grown. Blacks, especially successful ones, know they have fit in as much as they're going to fit in -- what have we really got to lose now by taking off the wig? Far from post-racial, blacks are post-assimilation. We'll keep the fake hair and hot combs if we choose, but with a new attitude that doesn't fear white discovery -- or black shame. When Tyra announced last week that her hair would be “out and free,” it's clear she was talking mainly to those black girls (like her, no doubt) whose self-regard is too closely measured by the length, texture and general acceptability of their hair as pretty or “good.” She meant free from the burden of white-as-pretty, free as in free at last.

She did make a good messenger. Tyra's famous for letting it all hang out; in the past she's been almost proud to pull the curtain back by chatting about her cellulite and letting herself be photographed with no makeup. Clearly, hair is the last frontier for her, though it's a bigger field to conquer than she might have imagined.

To wit: I couldn't help noticing that Tyra was working that weave right up to the day of the Tuesday unveiling. I thought, will this bit of progress last? Will Tyra, like James Brown before her in his brief "I'm Black and I'm Proud" moment -- in which he jettisoned his famous process and went Afro -- return to form? Maybe, though I'm sure by then Tyra will describe going back to a weave as nothing more significant for her than putting on a hat, which is what she said Tuesday. It also could depend who's in the White House three years -- I mean, three seasons -- from now.