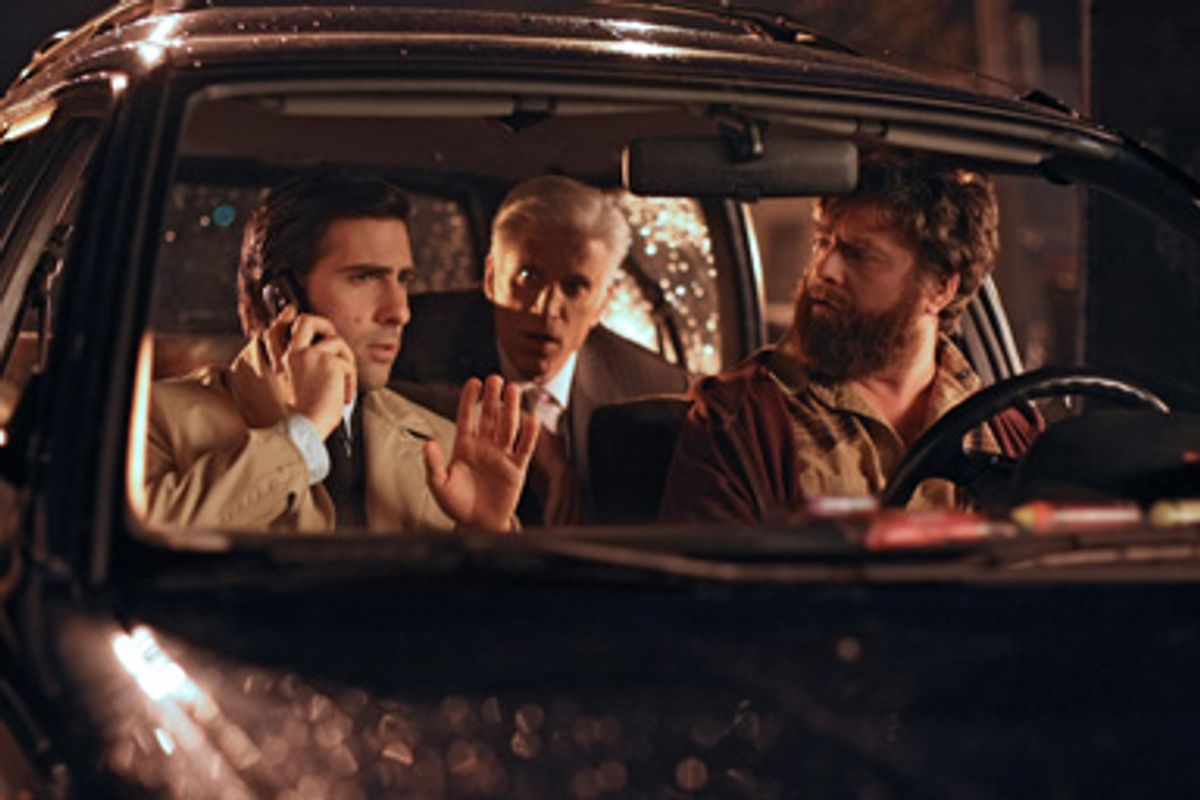 There's nothing quite like New York City in September, and there's nothing quite like the gaggle of self-involved magazine editors, pretentious filmmakers and aimless creative types who haunt its bars and coffee shops, waxing about the little tragedies and joys of their cloistered existences. Captured endlessly in plays, TV and movies muddling through their precious urban lives with only strong coffee and strong drinks to guide them, these deluded denizens of Manhattan and Brooklyn share a limited understanding of just how self-indulgent and foolish they are. In the wrong writer's hands, such characters are intolerable. (Whit Stillman, anyone?) But in the right writer's hands, well, you've got the best Woody Allen films, for starters.

Novelist Jonathan Ames, who's been happily demeaning himself since he wrote a column about his neurotic tics, childhood experiences and sexual escapades for New York Press, may be a suitable scribe to pick up where Allen left off. In his HBO comedy "Bored to Death" (premieres 9:30 p.m. Sunday, Sept. 20) he peels back the layers of vanity and self-delusion that clog up overly precious creative circles to reveal a bunch of hapless children, trying (and often failing) to keep themselves productively occupied.

The show's odd beats and absurdly pretentious pauses feel like a cross between the awkward brilliance of "Annie Hall" and Charlie Kaufman's best films. Take this scene in which the lead character, a fictionalized version of novelist Jonathan Ames named -- you guessed it! -- Jonathan Ames, is approached by filmmaker Jim Jarmusch at a party:

Jim: So I really loved your novel. Dark, funny, perverted? Beautiful. You must really suffer from the terrifying clarity of your vision.

Jim: Take a look at this screenplay. I kinda dashed it off. It's about the New York poet Frank O'Hara. He had a beautiful nose, like a boxer.

Jonathan: Yeah, I know. I love his nose.

Jim: He got run over by a dune buggy on Fire Island.

Reeling in the wake of a breakup with the woman he feels is his soul mate (sound familiar?), Jonathan is looking for some way to stop rattling around in his head all the time. Instead of flashing back to every moment he ever spent with his true love, though, Jonathan decides he needs to become a man of action. So he takes out an ad online as an unlicensed, untrained, freelance private detective, and soon he's fielding calls from strangers with problems that might better be confronted by … well, a licensed, trained private detective.

Jonathan may be a crappy detective, but he's quite earnest and devoted to his cases, which he mostly investigates by following people around in clear view, and by spending every free moment with his magazine editor, George, played brilliantly by an affable, white-haired Ted Danson. George seems to point to the semi-nihilistic, hedonistic confusion that lies at the end of a creative career. "You know, I’m very oral nowadays," George confides to Jonathan as his naked, much-younger, bossy lover enters the room. "I feel like I'm half man, half infant!" George breaks out into a giggle. "She makes me feel like I'm 50 again!"

Jonathan also has a cartoonist buddy, Ray (Zach Galifianakis, the unforgettable lunatic in "The Hangover"), who represents a less ambitious trajectory. Ray's girlfriend wants Ray to get some kind of a job, but Ray wants to wake up at 11 a.m. and amble through his day like any real artist should. "Those women were into us because we were artists," Ray tells Jonathan. "And then reality hits, and no money, and no real future, and, you know …" Later in the same episode, Ray has a bickering match with his girlfriend in the street, which ends when Ray weeps big salty tears and his lady is forced to comfort him.

Jonathan is similarly wishy-washy and vulnerable, but somehow the silly little concerns of these two hapless losers become our own very quickly. The first two episodes of "Bored to Death" may be a little rambling and odd, but things pick up in the third episode when Jonathan spends some particularly amusing time with George and his ex-wife and her current husband (played by the deliciously nasty Oliver Platt). After his absurd encounter with Jarmusch and a few other twists and turns, Jonathan ends up bribing Ray into sneaking into a psychotherapist's office to retrieve the copy of Jarmusch's script, which Jonathan left there. Ray pretends to be a new patient of the psychotherapist's in order to get the script -- but it all goes horribly wrong when Ray emerges from the office looking sick and pale.

Ray: He gutted me, like a fish! He said I was so cut off from my feelings that everyone in my life would die without ever really knowing that I loved them!

Ray: (Through tears) I want to go home. I want a beer. I want an ice cream sandwich. I want to take a nap. I want to read a comic book. I want to watch "Little House on the Prairie." And I want a vodka.

Yes, "Bored To Death" may be a parody of noir, or maybe it's a dramedy that dips into detective novel tomfoolery, but most of all, it's a story that revels in the realm of those strange overgrown children who use artistic pursuits to justify their weak little whimpering selves. I would find something suspicious or unlikable about these characters and the sly, demented comedy they inhabit if I could, but right now, I want to go home, have a beer, eat an ice cream sandwich, and take a nap. Don't we all?