How can Obama top a great speech? 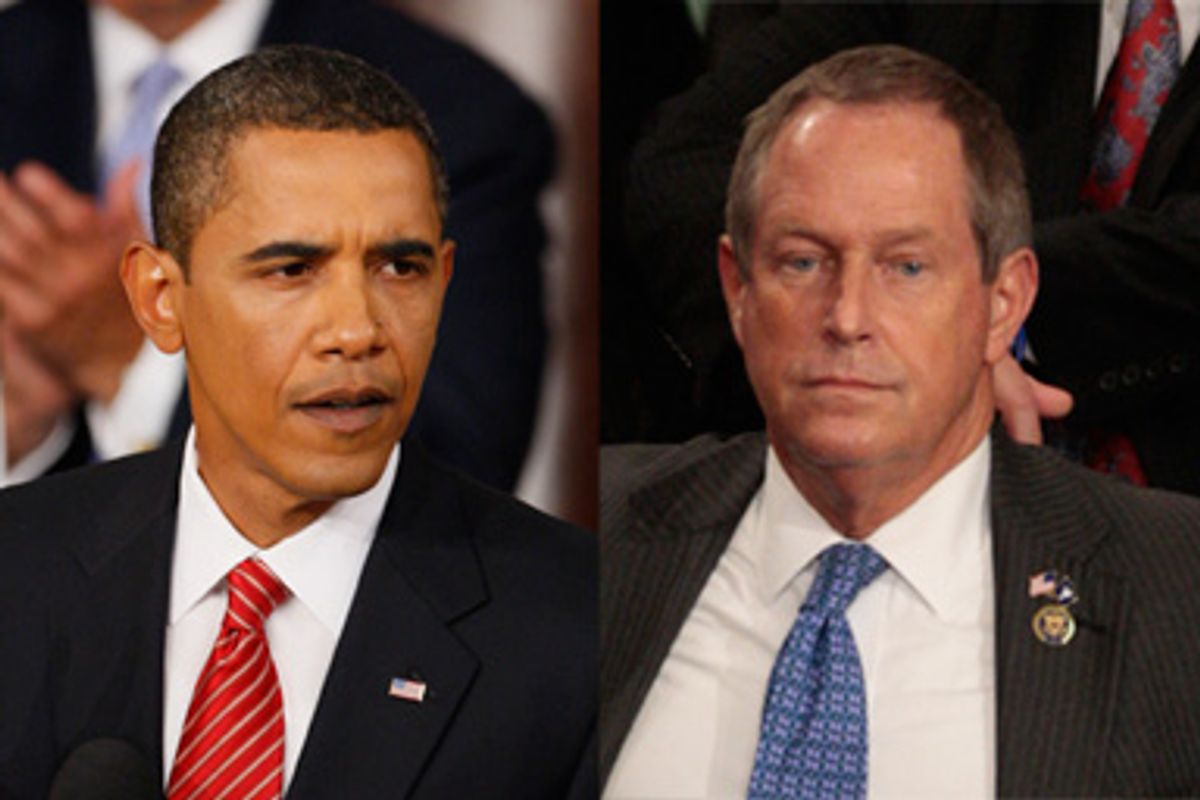 I know some Democrats doubted whether President Obama's healthcare speech to a Joint Session of Congress could be a so-called game-changer. After I wrote my last piece praising his populist stemwinder to the AFL-CIO on Labor Day, I heard from Obama supporters who were tired of inspiring speeches and who wanted action from the president instead. I sympathized.

But if ever a speech was a form of action, it was Obama's Wednesday night.

Let me talk about what he said about the crucial public option a little later. What was most important about Obama's address was his declaration that he won't tolerate any more "lies" or "bogus claims" from the GOP. Yes, he used those terms. And right on cue, he faced a crazy congressional heckler, now-infamous South Carolina Rep. Joe Wilson, who was caught by a USA Today camera red-faced, screaming, "You lie!" at our president.

How is it that Obama hasn't faced a single heckler in his own healthcare town halls, but he's not safe from the angry, uninformed mob when he speaks to Congress? The next time you see an Important Republican Leader claim the town-hell hecklers are just fringe elements and bad apples, remind them of Rep. Wilson. (And in the meantime, if you're inclined, give some money to Wilson's Democratic challenger, Rob Miller, who's raised more than $50,000 since Wilson's moment of political flatulence.)

Back to the speech: My only real criticism is I wish he'd found a way to do this two months ago. Obama has never before been so lucid in explaining why reform is crucial. Deflating the notion that we're somehow taking on a new public responsibility, he delivered the factoid I've in fact been looking for these last weeks: Each taxpayer already spends an average of $1,000 a year covering the emergency healthcare costs of uninsured folks. We're paying now, we're just not aware of it. Likewise, I thought this point was crucial: "Put simply, our healthcare problem IS our deficit problem. Nothing else even comes close."

On the issue I care about deeply, and hate to see marginalized even by Obama as merely the cause of progressive Democrats -- the public option -- I think he did fine, for now. Sure, I winced along with David Sirota when he set up a false equivalence between the left and the right on this issue -- because I believe the left is right that the public option is crucial to hold down costs and spur competition, while the right is wrong on the issue, and frequently batshit crazy -- but I mostly got over it. I thought Obama sold the plan modestly, but politically astutely, as a form of choice, and I liked the line, "I don't want to put insurance companies out of business, I just want to hold them accountable."

Of course the letter from Sen. Ted Kennedy to Obama, written before but delivered after Kennedy's death, was the climax of a great speech. It let Obama return to his theme that healthcare in this wealthy nation is a moral issue and a matter of social justice. At first I wished Obama had read the whole letter -- read it, it's incredible -- but later I appreciated his restraint, not playing every line for applause (or in the case of the Kennedy family and at minimum Vice President Biden, tears).

Things I liked less: Well, I loved Obama's trying to show up both Democrats and Republicans who voted for both the Iraq war and Bush tax cuts with no thought to the deficit he inherited, but I was not crazy about his firm promise, "I will not sign a plan that adds one dime to our deficit." I'm not sure he can keep that promise, for one thing, and it's not a pledge he makes when asking for more money for Afghanistan, or for the not terribly stimulative tax cut he included in the stimulus bill.

But that's a relative quibble. My real question is this: Will Obama follow up this speech with political muscle? I thrilled to reports that White House chief of staff Rahm Emanuel demanded an apology from rowdy Rep. Joe Wilson -- and got it. I look forward to the day a similar story is leaked about the way Emanuel dealt with House Blue Dogs like Arkansas Rep. Mike Ross, who says he won't vote for a bill with the public option, or Senate "Gang of Six" members Max Baucus and Kent Conrad.

The fact is, Republicans are mostly irrelevant now. President Olympia Snowe -- I don't remember electing her, but whatever -- can claim the answer to the impasse is a public option "trigger" that kicks in when it's clear private insurance companies can't/won't reform and compete. But we all know we're past that point already, even if Snowe claims not to. Obama said the insurance "exchange" within which the public option will be a "choice" won't kick in for four years anyway; Snowe has suggested the public option "trigger" might kick in after five years. Do they think we're stupid? Even with a second term, former President Obama would be writing his memoirs and picking out furniture at his library before a trigger might take effect. Sasha and Malia would be adults. Why would Democrats -- the majority in both Houses -- go along with such an impotent plan?

Because they're Democrats? I hope not. But we all have to admit that the majority party has accomplished little since they took congressional power in 2006, and only a little more since Obama took office nine months ago. For Obama, leadership now requires showing some muscle, becoming the Blue Dog Whisperer, and getting votes for his healthcare reform plan, not merely making speeches.  The president must realize his party colleagues are the ones who can save or sabotage his presidency, and act accordingly. After Wednesday night's speech, I have some faith that he will.