The House GOP offered a case study in how not to sit and listen to a president, and they'll pay a political price 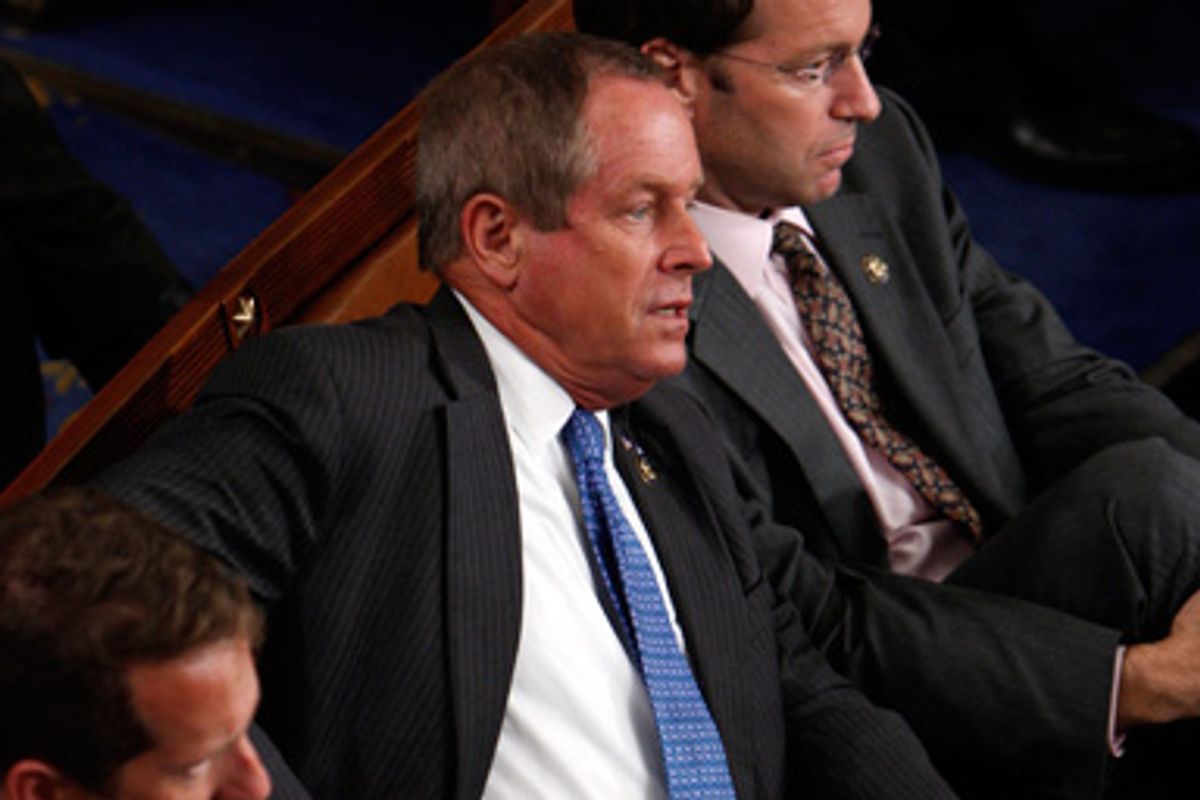 U.S. Representative Joe Wilson of South Carolina listens to President Obama's speech after yelling out "You Lie" during the President's speech about healthcare reform to a joint session of the Congress on Capitol Hill in Washington, September 9, 2009.
--

Whoever came up with House Republicans' strategy for a real-time response to President Obama's address to a joint session of Congress Wednesday night should probably have given the whole thing just a little more thought.

The original Republican plan, which was to carry in copies of various GOP-sponsored healthcare bills with the words "What bill?" written on the back in case Obama accused the opposition of not having proposed its own solutions, might not have been so bad on its own. It would have looked petty, sure, maybe a little childish -- certainly it wouldn't have been the most dignified thing to do while sitting in the House chamber as the president speaks. But it might not have gotten much attention, save a few puzzled questions, were it not for Rep. Joe Wilson, R-S.C., who interrupted the president's speech with a shout of "You lie!"

Wilson has already put out a statement apologizing for his outburst, and even called the White House to offer his apologies to Chief of Staff Rahm Emanuel. (After the speech, Emanuel reportedly approached two Republican leaders and demanded that apology, saying, "No president has ever been treated like that.")

But the damage has already been done. The story now -- and, most likely, on Thursday -- is congressional Republicans looking like a bunch of townhall protesters during the speech, being generally disrespectful to the president. And there's more fodder for that story still percolating out there. There's video of Rep. Eric Cantor, R-Va., the Minority Whip, on his BlackBerry during the speech, for instance. And then there's this, from an article by the Washington Post's Dana Milbank:

When Obama addressed the charge that he plans "panels of bureaucrats with the power to kill off senior citizens," someone on the GOP side shouted out "shame!" The president went on: "Such a charge would be laughable if it weren't so cynical." "Read the bill!" someone shouted back. Obama mentioned those who accuse him of a government takeover of health care. "It's true," someone shouted back .... Even as Obama delivered a tribute to the late senator Ted Kennedy, Rep. Tom Price (R-Ga), a leader of House conservatives, perused his BlackBerry. Shortly before the speech ended, Rep. Patrick McHenry (R-N.C.) walked out to beat the rush.

All of this is a gift to the White House. All of it will serve to reinforce the impression, which reform supporters have been working hard to create and spread, that Republicans have gone around the bend, that they're more interested in attacking Obama than in reaching across the aisle to work on reform. And it makes Obama look calm, bipartisan and presidential.

There's some damage to Wilson himself, too. As of this post, his Democratic opponent for 2010, Rob Miller, had raised about $50,000 since the speech.