I work with seniors, and I'm 62 -- but I'm stunned by the selfishness of the old when it comes to healthcare reform 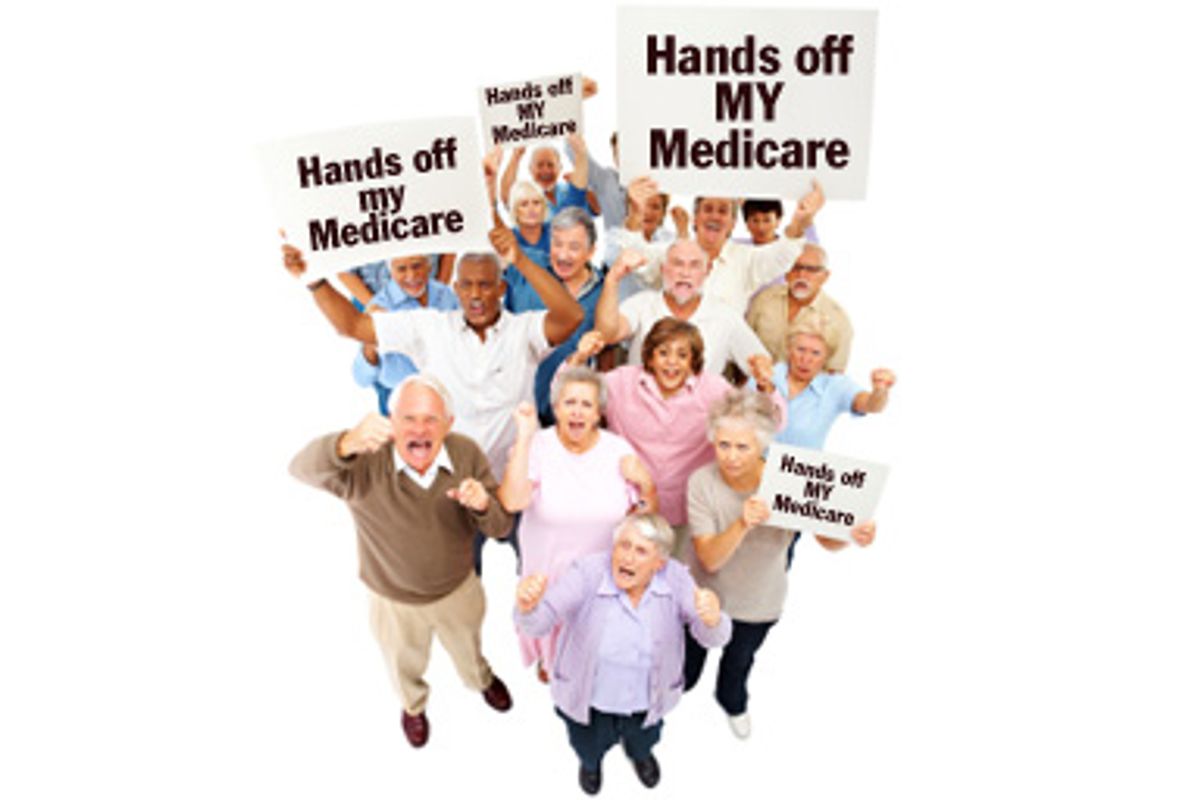 One score and 14 years ago, our president's denial of federal assistance to a strapped New York was captured in a famous headline: “Ford to City: Drop Dead.”

Now we are engaged in a great civil war over healthcare, and the greatest generation is standing on the battlements against federal assistance to the uninsured. They’re the old man in the neighborhood yelling "Get off my lawn!"

Their lawn is Medicare, and alone among generations, our elders are virtually 100 percent insured. There is that ancient injunction to honor our elders, and we currently honor them so much that they get far more out of Medicare than they pay in.

Meanwhile, according to the Urban Institute, up to 22,000 Americans are literally dropping dead each year due to lack of health insurance, and thousands more suffer through a lowered quality of life from failing to receive treatment for debilitating and chronic diseases.

I’m 62 -- old enough to cash in my 401K, yet still too young for Medicare -- and, despite my advancing age, some might view this as just another infantile boomer rant. But I want to put in a word for the idea that the elderly among us are just plain selfish -- as is any group with health insurance that believes what’s good for them is threatened if made available to others.

Where is the idea of community, the idea that we sacrifice and help others? Those who oppose government, conveniently forget that the community, "we the people," wrote the Constitution to "promote the common welfare."

It’s not my boomer self but the elders who are acting infantile.

As someone who works with old people as a psychologist in nursing homes, resisting ageist stereotypes is part of my job, but polling indicates that when it comes to healthcare, resistance to change is a stereotype that has a whiff of truth. A poll released Aug. 20 by the Kaiser Family Foundation indicates that 34 percent of those over 65 believe they would be worse off with healthcare reform, while 23 percent think they will do better.

In contrast, among those under 65, the numbers flip. Thirty-nine percent think they would be better off, 30 percent think worse off.

Polling by the Annenberg Institute indicates that old people have historically been the most opposed to spending more on healthcare for children.

So much for the idea that Grandma will do anything for her grandchildren.

Another stereotype of the elderly is that they are confused, and these polling numbers may partly explain the senior citizen who stood up at a town hall and exclaimed, "Keep the government’s hands off my Medicare!"

I can accept the idea that they’re worried about change, but I’m chagrined by the attitude that I’m OK, but I don’t care if you’re OK.

President Obama is proposing that there can be Medicare savings of $500 billion over 10 years. I don’t know if this is possible, but the old are too ready to accept the idea that any savings in Medicare would be pulling the plug on them. The millions without insurance would love to have that kind of plug pulled on them.

Meanwhile, I’d like to think that I’d be noble enough to wait a month or two for a hip replacement so that a child could have basic, primary care. It will cost more to insure all, and this could be readily achieved with an overall increase in taxes -- anathema in our political culture. Plus, there’s that other myth that higher taxes are incompatible with capitalism.

But consider that when the World Economic Forum annually ranks countries on global competitiveness, the U.S. is the only one in the top 10 without national health insurance.

Sure, the other countries have higher taxes, but they also have six-week vacations and paid maternity and paternity leave, and they look at you with puzzlement when you ask whether anyone in their countries goes bankrupt over crippling medical bills. It's the the No. 1 reason for bankruptcy in the U.S.

The Forum asserts that healthcare "is necessary to enable individuals to effectively engage in economic activity." Just think of all the entrepreneurial activity that could be unleashed if even those citizens who had employer-based insurance did not have to cling to their jobs with a death grip, knowing they would have to spend an average of $15,000 each year to attain what most of our competitors consider a basic human right.

So, Granny, get over your selfish fear of change and think for a minute about the other generations. By the way, you might get something back. If you were living in, say, Sweden, one of those countries with "socialized" healthcare, you would not have to impoverish yourself to pay for a nursing home. You’d have something to leave to your grandkids other than your love.

Ira Rosofsky is a psychologist and the author of "Nasty, Brutish, and Long: Adventures in Old Age and the World of Eldercare." It is an account of his work in nursing homes, and the story of caregiving to his own frail, eldery parents, to the accompaniment of ruminations on mortality and being old in America.