Is the GOP a cult? 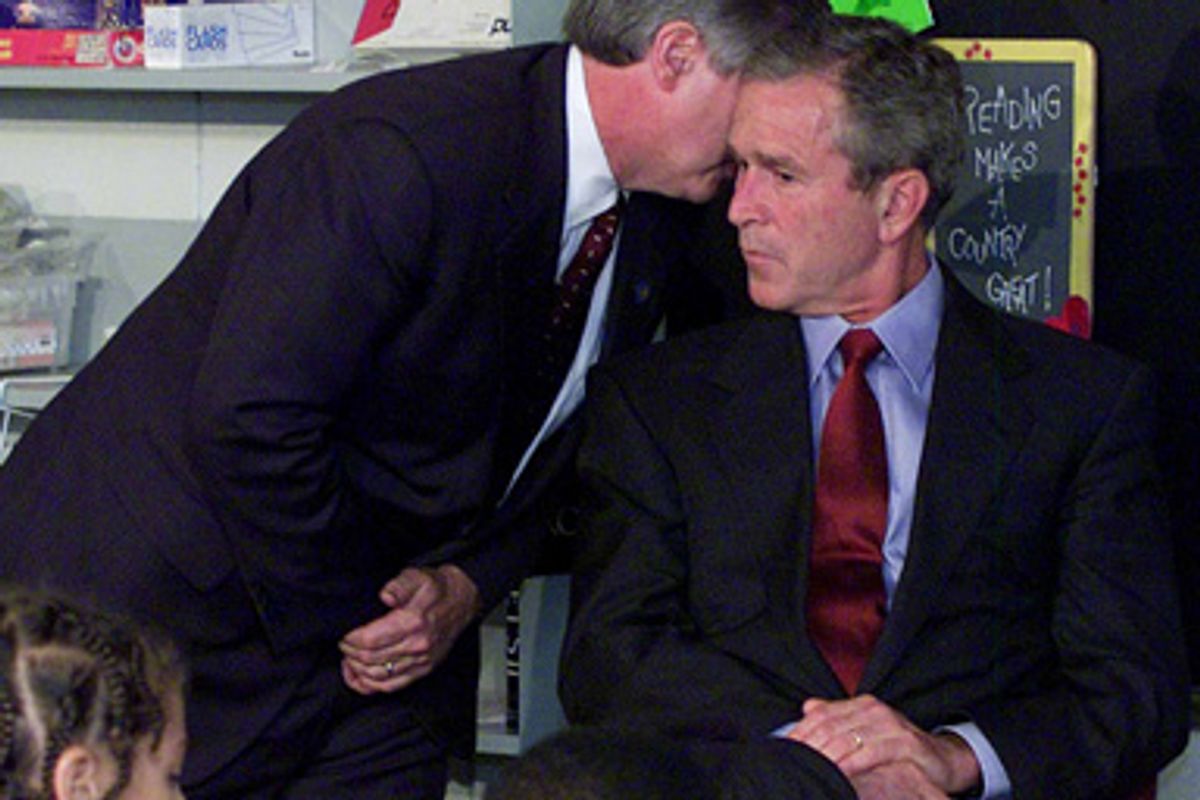 In this Sept. 11, 2001 file photo, President Bush's Chief of Staff Andy Card whispers into the ear of the President to give him word of the plane crashes into the World Trade Center, during a visit to the Emma E. Booker Elementary School in Sarasota, Fla.
--

"Men, it has been well said, think in herds; it will be seen that they go mad in herds, while they only recover their senses slowly, and one by one." -- Charles MacKay, "Extraordinary Popular Delusions and the Madness of Crowds," 1841

Is there anybody who's forgotten exactly what President George W. Bush was doing on the morning of Sept. 11, 2001? He was in a Florida classroom, reading to schoolchildren. Because it was televised, almost everybody witnessed Bush's stunned reaction to the al-Qaida terrorist atrocity. It would be years before we learned that one reason for the president's deer-in-the-headlights look was: OMG, what if anybody finds out I blew off that CIA briefing?

But that's not the point. Bush had received a minority of the votes in the 2000 election. He was made president by a Supreme Court decision many regarded as farcical. Yet nobody seriously protested his reading to schoolchildren. Urging kids to stay in school and improve their prospects in life is one of those ceremonial presidential tasks like pardoning the Thanksgiving turkey or greeting the World Series champions.

Making a stink about it would be as petty and ridiculous, as Florida (yes, Florida) Republican Chairman Jim Greer's hissy fit about President Obama's alleged attempt to "indoctrinate America's children to his socialist agenda" by urging them to do their homework and earn their diplomas.

On cue, the GOP's influential Henny Penny faction took up the cry. During a slow week, cable news networks featured pundits bickering about Obama's speech. (They'd call tapioca "controversial" if some wingnut did.) On Fox News, one commentator denounced the president's sinister motives. "They do this type of thing in North Korea and the former Soviet Union."

As Josh Marshall pointed out, Obama had to be the first black man since Bill Cosby was a pup criticized for urging kids to study. Even so, school boards in such benighted precincts as Fayetteville, Ark. -- a university town, for heaven's sake -- caved to the pressure. No mandatory exposure to the Antichrist's glowing, hypnotic eyes: "Forsake your families, children, and follow ME!"

So has the GOP actually degenerated into a cult? Well, it's impolite to say so. Also, not every prominent Republican endorsed the latest crackpot enthusiasm. Former Florida congressman Joe Scarborough wondered aloud, "Where are all the GOP leaders speaking out against this kind of hysteria?" On CNN, Laura Bush praised Obama's message and added that she thinks "it's also really important for everyone to respect the president of the United States."

Even Newt Gingrich said something relatively sensible. So you know the Henny Penny bunch went too far. More symptomatic was a Survey USA poll taken in the Missouri heartland showing that 70 percent of parents would urge their children to pay close attention to Obama's address, versus 21 percent who'd prefer to keep their kids home from school -- foolish, but definitely their right.

A poll in Fayetteville, near the Missouri border, would likely show similar results. In Arkansas generally, the fundamentalist right traditionally makes all the noise but loses most elections to moderate Democrats. So why did school boards cower? Maybe because they know that while Obama supporters might grumble, they won't show up with guns.

A more significant mystery is why Democrats nationally don't make better use of the GOP's periodic episodes of paranoia. While it's impossible to anticipate the exact content of its delusions -- comparing Obama to Hitler and Korean strongman Kim Jong Il, "Birthers" denying his citizenship, "death panels," White House "czars," etc. -- their appearance should come as no surprise.

After all, millions of Americans are attracted to "End Times" narratives as theology and popular entertainment. Not for nothing did Tim LaHaye's ponderously bad "Left Behind" sell millions of copies. How thrilling to imagine that one's humdrum existence has cosmic meaning. Of course, it's questionable how deeply people investing in life insurance policies and 30-year mortgages actually believe that stuff.

It's much the same with the far right's political delusions. How many seriously believe that Democrats favor euthanasia? Relatively few.

But you can't beat something with nothing. Which is why the Democrats' collective failure to develop a strong counter-narrative remains so bewildering. Are they waiting for what Eric Alterman calls the So Called Liberal Media to step up?

That's never going to happen. To cable TV, in particular, politics is a carnival sideshow; they're peddling tickets. Countering one falsehood at a time keeps Democrats constantly on the defensive. People need to be told a competing story: Who's deceiving them, and why. Take "death panels." Who first concocted the lie? Who pays her? Where does the money come from?

Describing the machinations of the right-wing noise machine shouldn't simply be left to Internet media critics. It should be an out-front political issue at a national and local level.

Sure, they'll call it "class warfare." They already do.