"Whiteout" is a wipeout 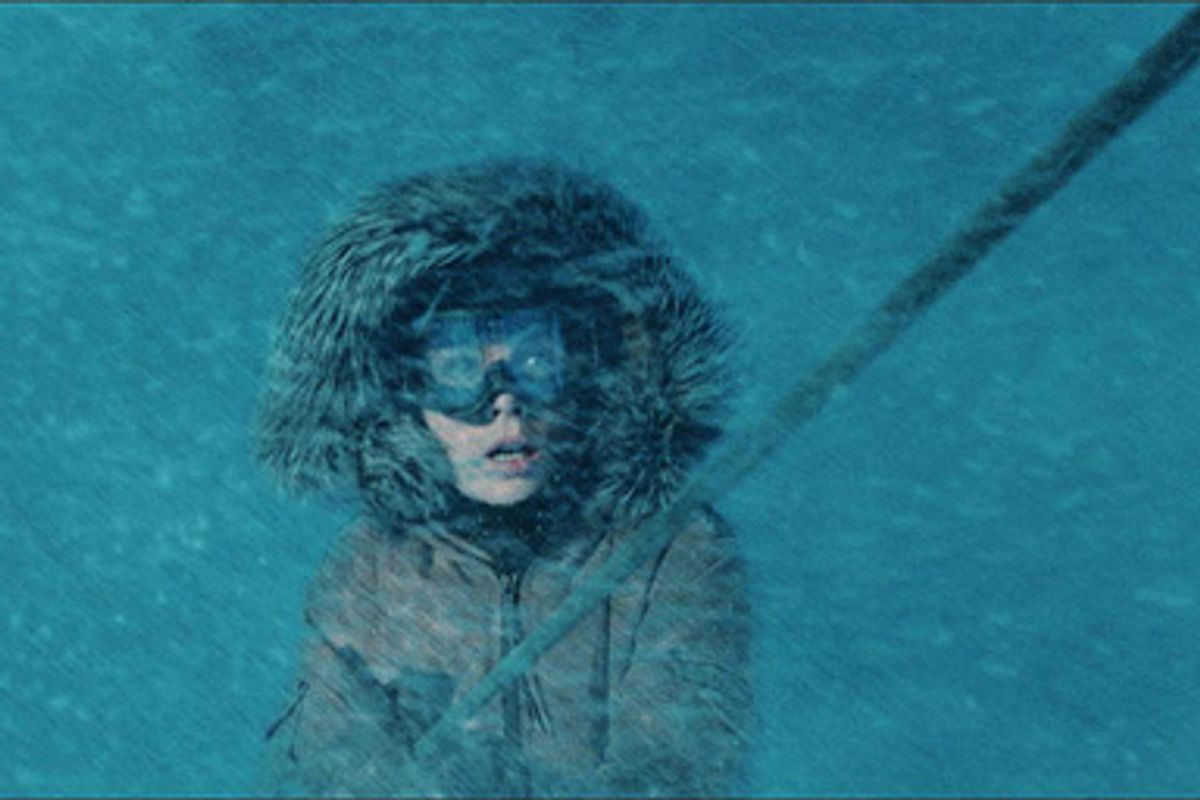 Early in Dominic Sena's "Whiteout," a screen title informs us that Antarctica, the movie's setting, is "the coldest and most isolated land mass on the planet." Phew -- good thing that's settled. Later, other questions will arise: Why is U.S. Marshal Carrie Stetko (Kate Beckinsale) stationed there (specifically, at the Amundsen-Scott South Pole Station)? What's up with the dead guy -- the one with his face smashed in -- who's glued to the ice with his own frozen blood? And who, exactly, is that crazy snorkel-coated dude running around with a pickax?

By the end of "Whiteout," most of those questions have been answered, at least in some cursory fashion. And along the way there are several grisly forensic gross-outs -- semi-frozen bruises and wounds being poked and prodded; sutures being delicately unpicked -- for those who like that sort of thing. But what's missing from "Whiteout" is the pervasive sense of paranoia that you'd expect, or hope for, from a thriller set on the coldest and most isolated land mass on the planet. Sena (whose credits include "Kalifornia," "Gone in 60 Seconds," "Swordfish") and his writers, Jon Hoeber, Erich Hoeber, Chard Hayes and Carey W. Hayes (working from the graphic novel by Greg Rucka and Steve Lieber), go through all the motions of making a suspenseful thriller, without actually making one. Instead of being sharp and stylish, the picture just meanders pointlessly toward its allegedly surprising conclusion, dragging the actors along with it. Nearly everything about it is heavy and off-balance, like an overloaded sled.

Still, we're supposed to care that Beckinsale's Stetko has a big secret, revealed gradually in a series of flashbacks. And we're supposed to care that, just days away from retiring from the marshal service (and from leaving Antarctica, on the last transport out of the area for the winter season -- anyone left behind will have to wait until spring to get the hell out of Dodge), she's called in to investigate the mysterious death of an American geologist (who, we learn, also used to cheat at cards when he was alive -- any old detail is interesting on the coldest, most isolated land mass on the planet). Alternately helping and hindering her are her grumbly pal Dr. John Fury (a skinny, squinting Tom Skerritt) and the pilot who ferries her around the frozen South, Delfy (played by Columbus Short, who gave a terrific performance as Little Walter in Darnell Martin's "Cadillac Records"). And when U.N. investigator Robert Pryce (a bland, impenetrable Gabriel Macht) appears on the scene, Stetko realizes she's not dealing with your garden-variety Antarctic homicide.

Beckinsale is an appealing, gifted actress, as she's shown in pictures like "Laurel Canyon" and "Serendipity." Even in the first "Underworld" picture, as a latex-clad vampiric prowler, she was fun to watch. Her performance here is serviceable, but the thing about it that most impressed me was the way her sleek, glossy bob always looked great -- no static, no hat-head -- even after being squished under massive furry headgear. That's part of the magic of Hollywood, and it's great, but it doesn't represent the best use of Beckinsale's considerable charms.

There are a few scattered moments in which "Whiteout" -- which was filmed not in Antarctica but in Manitoba, with lots of fake snow -- almost lives up to the chilly promise of its setting. One scene gives us a clear sense of what being stuck in a whiteout (a convergence of conditions -- I guess you'd call them wind, snow and brick-ass cold -- in which you can't see a damn thing and can readily freeze to death just steps away from your own front door) might be like. We see Stetko trying to outrun an assailant in whiteout conditions, although "outrun" may not be the proper word: Both she and her pursuer are wrapped up, Michelin Man-style, in puffy snow gear, and Stetko clutches desperately at the rope that connects her to safety. (She also happens to be missing a glove, which leads to drama, and trauma, later.) The snow and wind around these two prevent either of them from moving very quickly, and their striding is more like stumbling. But, as Stetko does, we only get half-glimpses of the baddie through the swirling snow, and the things we can't see are always far more menacing than those we can.

That's something Howard Hawks knew when he made the science-fiction thriller "The Thing" -- set at the Earth's other pole -- in 1951. That picture, too, was about a group of individuals investigating a mystery in an icy, isolated landscape, but the similarities between the two movies end there. Hawks' movie gives us the sense of what it might be like to be among the last people on Earth; it imparts the idea that nowhere is safe. For that deep-rooted sense of fear and melancholy, "The Thing" is the thing. "Whiteout" is just a pale imitation.