The photo of a fallen soldier

The death of Marine Joshua Bernard, captured in a controversial photo, reminds us of the war that won't end 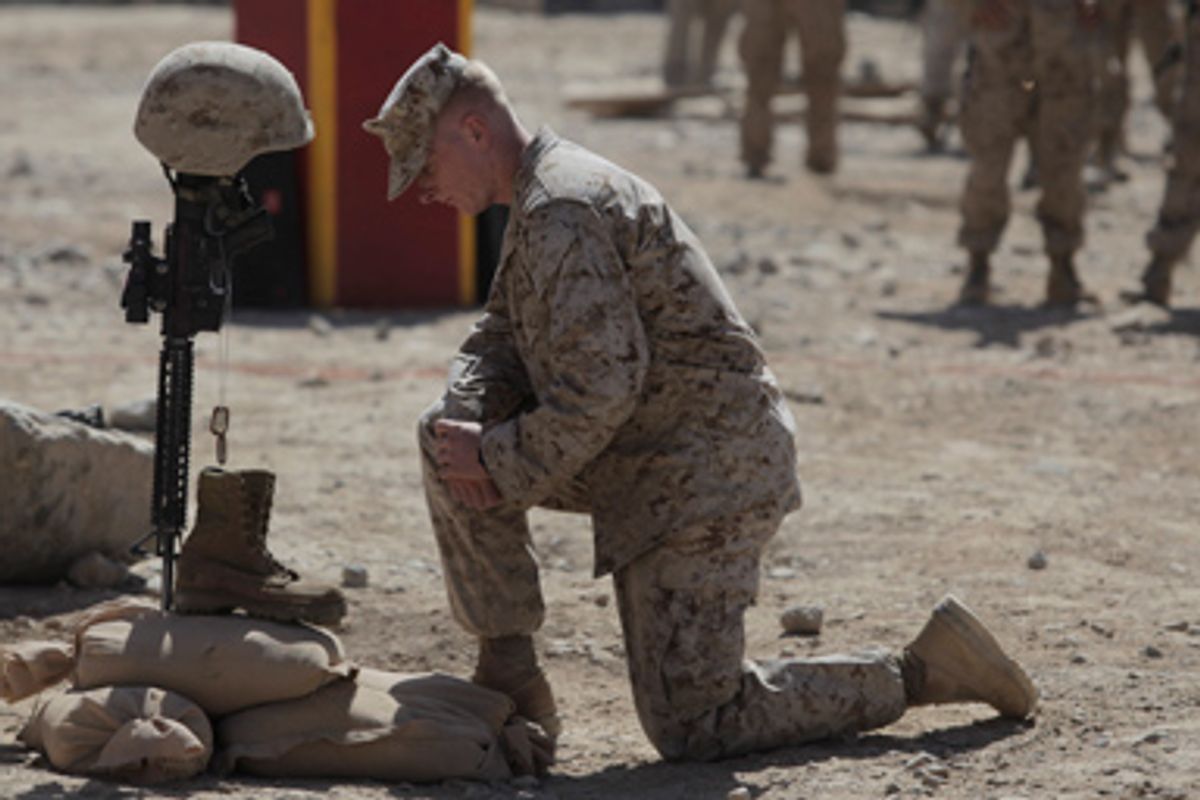 In this Thursday, Aug. 27, 2009 file photo, U.S. Marine Lt. Jake Godby pays his respects to Lance Cpl. Joshua Bernard during a memorial service at a forward operating base with Golf Company, 2nd Battalion, 3rd Marines, in Now Zad in the Helmand Province of Afghanistan.
--

There was a certain ironic and painful symmetry at work last month. As one iconic image of war was called into doubt, another was being created, a new photograph of combat's grim reality that already has generated controversy and anger. When it was first published in 1936, during the Spanish Civil War, Robert Capa's photo was captioned "Loyalist Militiaman at the Moment of Death." Better known today as "The Falling Soldier," the picture purportedly captures the gunning down of a Republican anarchist named Federico Borrell Garcia who was fighting against the forces of Gen. Francisco Franco. Dressed in what look like civilian clothes, wearing a cartridge belt, he is thrown backward in an almost balletic swoon, his rifle falling from his right hand.

The picture quickly came to symbolize the merciless and random snuffing out of life in wartime -- that murder committed in the name of God or country can strike unexpectedly, from a distance, like lightning from a cloudless sky.

Last month, the veracity of Capa's most famous picture was cast in doubt when José Manuel Susperregui, a Spanish academic, published a book in which he alleges that the photo was not taken where Capa claimed, but 35 miles away at a location where no fighting had yet taken place; that the picture was posed, a fake. Others disagree, but his evidence is compelling.

Just as that controversy was being reported in the news, in Afghanistan another man lay dying, another victim of war. His photo created a sensation, too. But no one is questioning its veracity. In this case, the image is all too real.

During an ambush on Aug. 14, Marine Lance Cpl. Joshua Bernard was hit by a rocket-propelled grenade in Afghanistan's Helmand province, where the Marines have been engaged in a major offensive, fighting to take territory back from the Taliban. Associated Press photojournalist Julie Jacobson took a picture of comrades trying to save his life. But it was too late.

Over the objections of Bernard's family and Defense Secretary Robert Gates, the AP published the photo as part of a series of articles and photographs about Bernard's platoon. Gates protested to AP that the wire service's "lack of compassion and common sense ... is appalling." AP replied that it had made a tough decision to "make public an image that conveys the grimness of war and the sacrifice of young men and women fighting it."

At "Bill Moyers Journal," our production team wrestled with the dilemma over whether to show the photo on this week's PBS broadcast. We finally decided to do so, but carefully placed it within the context of other pictures AP's Jacobson took earlier that day of Lance Cpl. Bernard and his fellow Marines on patrol. However your own conscience comes down on this issue, there can be no denying the story the photo tells. It forces us to confront through a young man's violent death the ugly, bloody reality of a war that America has been fighting longer than we fought in the First and Second World Wars combined. August was the deadliest month for our troops in Afghanistan since we first invaded the country shortly after 9/11. It has been a gruesome summer -- 51 Americans died in August; 45 in July. And to what end? The Taliban is resurgent. Almost two-thirds of the country is deemed too dangerous for aid agencies to deliver much-needed help. Civilian casualties this year have reached more than a thousand, including the victims of suicide bombings and so-called collateral damage from American airstrikes. The credibility of recent so-called free elections has been shattered with charges of widespread fraud and corruption.

As the Economist magazine noted last month, resentment against the Karzai government, NATO forces and Westerners in general is growing. "It seems clear," the magazine reported, "that the international effort to bring stability to Afghanistan, in which a strong somewhat liberal and democratic state can take root, is failing." And yet, consider this open letter to President Obama from some of the very same neocons who used falsehoods, propaganda and manipulation to throw us into Iraq -- arguing for invasion of that country even before the 9/11 attacks occurred. "We remain convinced that the fight against the Taliban is winnable," they write, "and it is in the vital national security interest of the United States to win it."

The letter lands just as several European countries have called for a conference to assess the current situation and the commander of our forces in Afghanistan, Gen. Stanley McChrystal, delivers a review to the White House, a report many believe sets the stage for an even greater expansion of the war. But on Monday, the McClatchy news service reported that some top Pentagon officials worry that without a clear definition of our mission there, further escalation may be useless. According to the article, "Some even fear that deploying more U.S. troops, especially in the wake of a U.S. airstrike last week that killed and wounded scores of Afghan civilians, would convince more Afghans that the Americans are occupiers rather than allies and relieve the pressure on the Afghan government to improve its own security forces."

One of that story's reporters, McClatchy's chief Pentagon correspondent Nancy Youssef, recently returned from Afghanistan and was interviewed by my colleague Bill Moyers for this week's "Journal." Youssef said, "I can't tell you how many Afghans said to me, 'I don't want the Americans. I don't want the Taliban. I just want to be left alone.'" Nonetheless, "Either the United States commits to this and really commits to it, or it walks away.  But this middle ground of sort of holding on isn't going to work anymore ... We're at least coming to that decision point ... And to me, that's good news, because at least it gives everybody involved some sense of where this is going.  I think that's something worth looking forward to. Because what's been going on up until now is unacceptable."

What no one understands for sure yet, she said, is President Obama's position: "That's the big mystery in Washington ... Because it will ultimately be his decision." We should have a better idea of where he stands on Sept. 24, when the White House is supposed to present a list of metrics by which progress in Afghanistan will be measured, a condition that was set by Congress for the approval of further war funding.

In addition to the theories of generals and diplomats, the president and Congress may wish to pay careful attention to the words of an Afghan villager named Ghafoor. He told a correspondent for the Economist, "We need security. But the Americans are just making trouble for us. They cannot bring peace, not if they stay for 50 years."

Not a pretty picture.