At a rally inspired by Glenn Beck, protesters say they're the real America, and are ready to take the country back 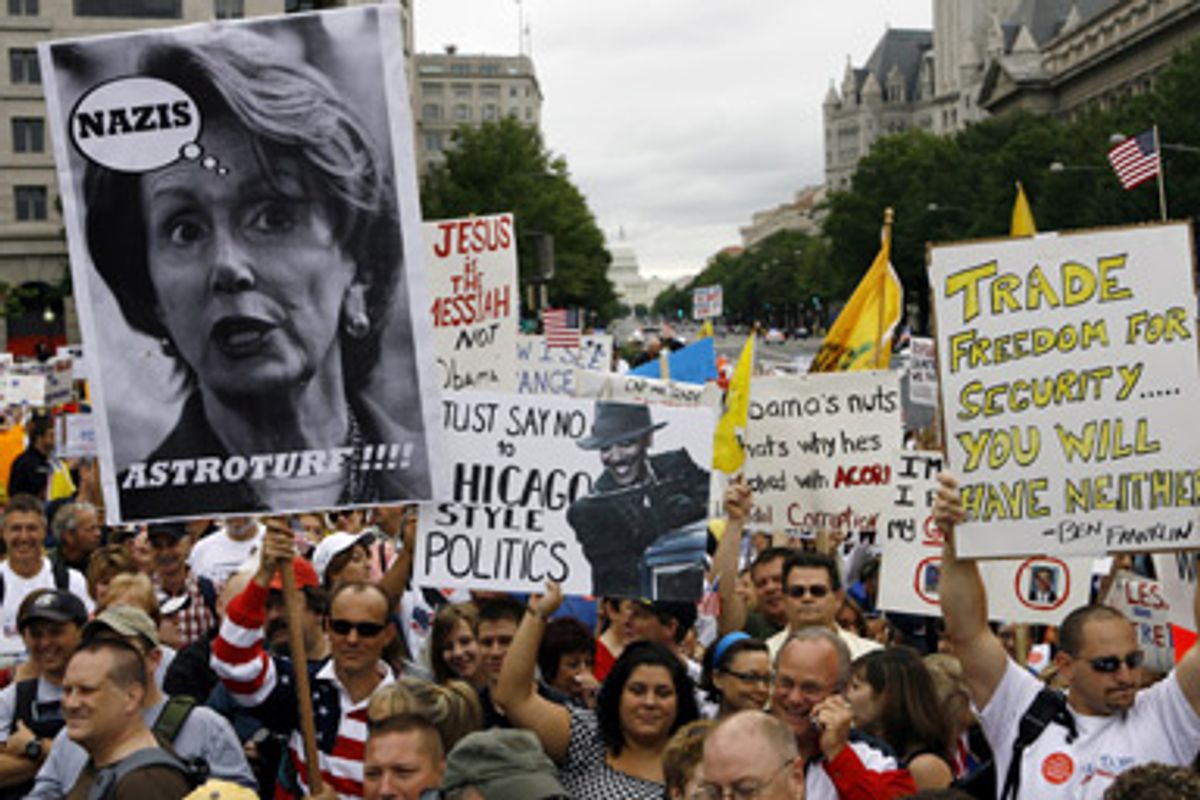 A crowd of people, some carrying signs, are shown during a rally at Freedom Plaza in Washington on Saturday, Sept. 12, 2009.
-- A crowd of people, some carrying signs, are shown during a rally at Freedom Plaza in Washington on Saturday, Sept. 12, 2009.

WASHINGTON -- "You have redefined gridlock in Washington, D.C.," Rep. Marsha Blackburn, R-Tenn., told the crowd gathered in front of the Capitol on Saturday for a rally that was part Tea Party and part Glenn Beck's 9/12 Project. The reference was to the highways around the nation's capital, which Blackburn said she'd heard had been closed due to the 1.5 million people who'd come out for the demonstration.

Crowd size estimates like the one Blackburn gave were flying around all day on Saturday. Some said they heard 1.2 million, others 1.6 million; conservative blogger Michelle Malkin said in one post that ABC News had estimated the attendance at 2 million.

Malkin was wrong -- ABC had never reported anything like that. In her own way, Blackburn was wrong, too. So were all the others. They weren't even in the ballpark, which most news outlets estimated in the tens of thousands and D.C. Fire and Emergency Medical Services said, unofficially, was somewhere between 60,000 and 75,000 people.

Still, that size crowd is a pretty impressive accomplishment. It's certainly not as large as plenty of the protests Washington has seen over the years, including some of the more recent anti-war rallies, but considering how unfamiliar these kinds of demonstrations are to the right and the distance many of the attendees traveled to be here, it can't be dismissed out of hand.

But the crowd numbers, and the confusion over them, were symptomatic of a larger phenomenon that was taking place on the Mall Saturday. Stepping in to the crowd there felt, at some times, like stepping into an alternate reality. It was a reality in which provisions establishing "death panels" really can be found in healthcare reform legislation, where President Obama is a Marxist and a Fascist, where the majority was represented by these protesters rather than the voters who elected a Democrat president and gave him an overwhelmingly Democratic Congress less than a year ago -- it was a reality where the D.C. Beltway had been shut down due to an influx of 1.5 million people, almost three times more than the entire population of Washington.

It was, also, a reality that would brook no interference from the one outside it. In one incident that's quickly become famous on the Internet, a CNN correspondent doing a live appearance on television was drowned out by the shouts of protesters behind her. The network was a frequent target, especially the bus it had parked on 3rd Street, which formed the border of the primary protest area. The vehicle became a gathering place for those angry about the mainstream media and what they perceive as its liberal bias. (By contrast, when most of the protesters went to a Fox News truck parked nearby, it was to express their appreciation.) One man stood out on the street in front of it, holding a large sign headlined "Today's state-controlled media." Below, he'd added the logos of various networks, and his own takes on their acronyms. There was NBC, or "Nothing But Crap," ABC -- "All Barrack (sic) Channel" -- and CBS, which he'd dubbed "Controlled by State."

At one point in the afternoon, a CNN employee stood on the sidewalk in front of the bus, a bemused look on his face despite the crowd of about 20 people that had gathered to hurl various insults at him and his company. One woman was there dressed as the Grim Reaper; she carried a sign that declared "Journalism died: 2008."

Of course, since I was dressed for work and standing there holding a pad on which I was taking notes, the crowd made me for a reporter too, and there was some ire directed my way as well -- some in good humor, some not so much. Then a young woman who declined to give her name pulled me aside.

She was right, too. Not everyone at the protest was "nuts," not by a long shot.

There was Linda Raileanu, for instance, who carried a sign reading "Nurses against Obamacare." A registered nurse who told Salon she had more than 20 years of experience working, in part, in Philadelphia hospitals, Raileanu said she was there because she worked with physicians and nurses who were against the Democratic proposals for healthcare reform and were "very upset Obama's giving the perception we're for it." She wanted to represent them, she said. But she did participate in that alternate reality a bit. Though she'd worked to provide end-of-life counseling, she told Salon she was against the provisions in the bills going through Congress that would provide coverage for people who choose to receive such counseling because she believed it should be done by professionals, not bureaucrats. (No bureaucrats would be involved in the actual consultation.)

But there were certainly a lot of people there who seemed like they'd fall under the "nuts" category, at least by the College Republican's standards. There was one with a sign that asked, "Whose spirit is in the White House?" and included photos of Adolf Hitler, Karl Marx, Fidel Castro, Hugo Chavez and Obama. Another sign borrowed the Joker Obama poster that's gotten a few minutes of fame recently, adding a Hitler mustache to the president's face; underneath the image were the words "Obamacare is Eugenics." One man held a sign reading, "Transparent? I see through your socialist lies, fool." Each o in "fool" had been formed by the Obama logo.

And there was the other woman who pulled me aside. She had come down from Germantown, Pa., she told me, but she, too, declined to give her name -- for fear of Obama's "snitches," she explained.

"I studied Nazi Germany, I read the story of how they took over," she told me. "From the very beginning I heard it with Obama ... I've studied the camps. That's why people are here, because they're afraid of the death camps that are coming." The woman also said she believed liberals had "voted for a hijacker ... voted for al-Qaida," but said she understood, because they hadn't known, and she was ready to forgive them if they woke up to the situation.

The atmosphere and the slogans were, in places, extreme enough that four liberals who'd come to parody the protesters were having no trouble slipping in unnoticed, even cheered. This despite the four -- Jack Neville, Julian Brunner, Tushara Ekanayake and Marina France -- carrying signs like one that read "A whole lot of white people here today" and another that asked "Where's the proof?" and showed an image of Obama's certification of live birth. Ekanayake's sign warned of gay Marxism -- it should have been a tip-off, except that he was also carrying a photo of Louisiana Gov. Bobby Jindal, a rising star in the Republican Party, and telling people he was Jindal's nephew. That, he said, had allayed suspicion.

"It's such an example of group think," France said of the crowd at the rally. She made a good case, too, pointing out yet another way in which the reality on the Mall Saturday differed from the one beyond it. One of the more popular themes in protesters' signs was a theme Beck has been harping on lately, the alleged proliferation of so-called "czars" like the drug czar in the Obama administration. Many of those signs linked the presence of those czars to Communism -- it was unclear if any of the protesters holding them were aware of the real history of Russia, in which the Communists overthrew and replaced the czars.