The president promises reform before year's end, but asks fat cats to do the right thing first. Good luck with that 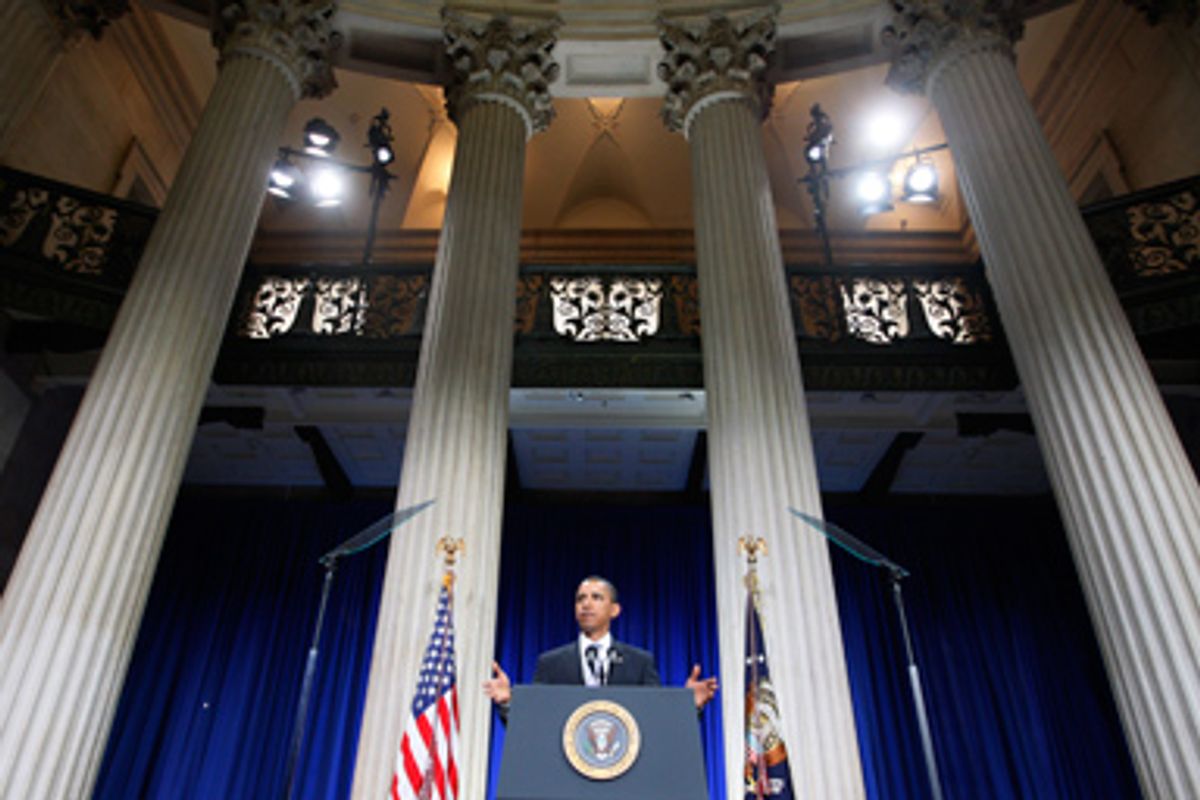 President Barack Obama speaks about the financial crisis, on the anniversary of the Lehman Brothers collapse, Monday, Sept. 14, 2009, at Federal Hall on Wall Street in New York.
--

One year to the day after the bankruptcy of Lehman Brothers sent the global economy into a vicious tailspin, President Obama went to Wall Street to preach comprehensive regulatory reform.

The operative word is "preach" because Obama's closing peroration called on Wall Street to do the right thing even before any legislation is passed -- as part of an effort to restore the American public's trust in the financial sector.

But we all know that's not going to happen. If Wall Street was in any way abashed by its experiences one year ago, it wouldn't be fighting tooth-and-nail to prevent any meaningful regulation. Even the most straightforward efforts to protect Americans from financial sector abuses, such as the proposed Consumer Financial Product Safety Commission, are already under sustained attack. It was encouraging to hear Obama list the commission as his first regulatory priority, indicating that he intends to fight for it despite the hue-and-cry that is already targeting it, but getting Wall Street to play by new rules will not be achieved by moral suasion. Legislation must be passed and then enforced. Malfeasance must be punished.

The only punishment that Wall Street understands comes at the bottom line of a financial statement. So if we strip away all the rhetoric, there is one section of Obama's speech that has real potential to make a difference, should it become manifest in law.

With so much at stake, we should not be forced to choose between allowing a company to fall into a rapid and chaotic dissolution that threatens the economy and innocent people, or forcing taxpayers to foot the bill. Our plan would put the cost of a firm's failure on those who own its stock and loaned it money.

Who could disagree with that statement? If the owners and lenders to a firm have their money on the line, they would be expected to rein in irresponsible risk-taking, and demand real "accountability" and "transparency" -- the oft-repeated watchwords of regulatory reform.

Obama's recipe for getting to that point includes new regulatory "authority" that would make closing down an out-of-control mega-financial Goliath as straightforward as an FDIC bank takeover. But getting that authority and using it are two very different things. If we compare today's financial landscape to that of a year ago, perhaps the most salient point is that today's biggest financial institutions are far bigger than they were before the crisis began. The consequences of a Bank of America or JPMorgan Chase failing now would be even greater and more disastrous than that of a Lehman Brothers or Bear Stearns a year ago. The challenges to be faced by regulators in the future seem destined to be greater than those of the past.

We need a great deal more than rhetoric now. Obama talked tough on Monday, but he's gotta start whacking people with a big stick if he wants to make a meaningful difference.