White voters and Obama's slide in the polls

What role does race play in who likes the president? A statistical look at when and why his white support slipped 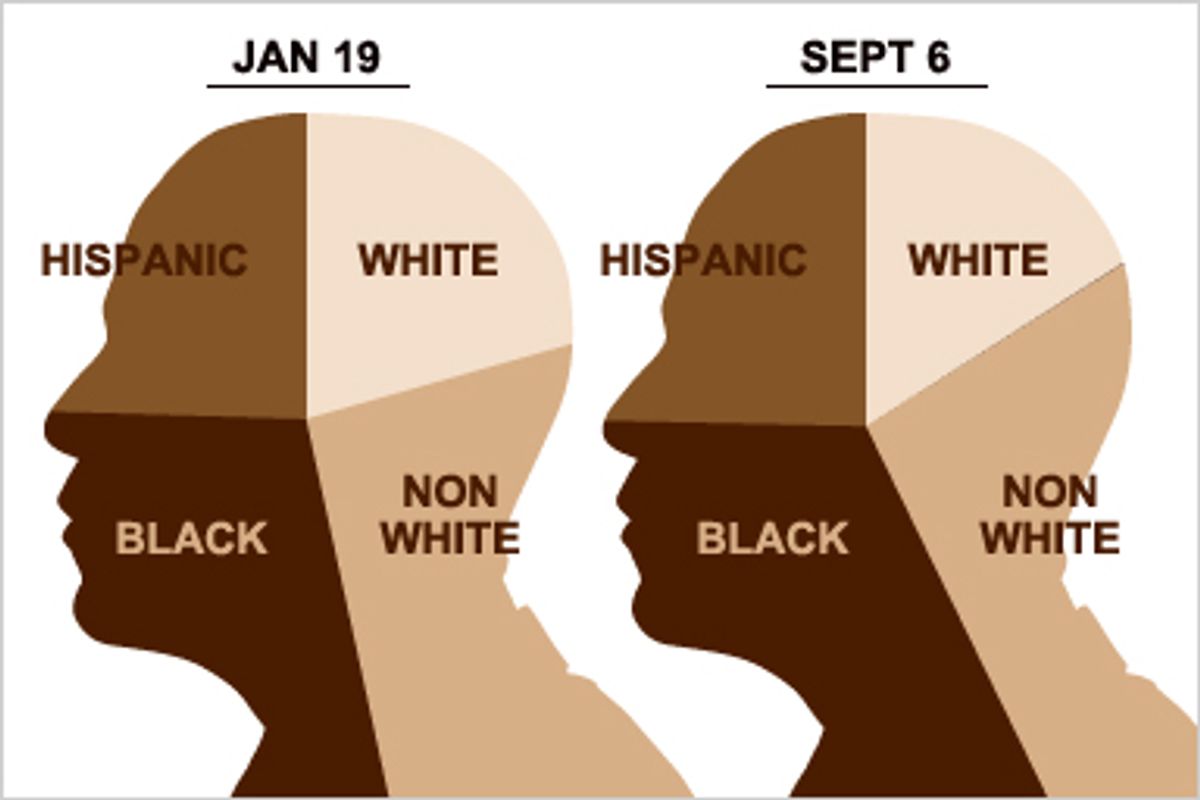 Barack Obama made his name by telling us that there aren't two separate Americas, black and white, but just one United States. Still, knowing the color of a voter's skin offers a fair amount of information about how that voter feels about the president. Among white voters, it's been dropping since this spring. Joan Walsh discusses some of the likely reasons, and some of the possible inflection points, in her blog; here, we're simply going to look at the numbers, and then look at what was happening in the political world while those numbers were being collected. Using Gallup polling data, the following charts show how President Obama's approval rating broke down among white, nonwhite, black and Hispanic poll respondents, and how those figures changed as specific key events occurred.

Feb 17: The president signs the stimulus package into law.

Feb 19: Rick Santelli delivers his rant on the trading floor of the Chicago Mercantile Exchange.

May 26: Obama nominates Sonia Sotomayor for the Supreme Court.

May 28: The president calls criticisms of Sotomayor "nonsense," but adds, "I'm sure she would have restated it."

June 4: The president delivers his speech to the Muslim world in Cairo.

July 15: Sen. Tom Coburn tells Judge Sotomayor, "You've got some 'splainin' to do."

July 21: The president comments on the arrest in a press conference, saying the police acted "stupidly" in arresting Gates.

July 22: Liz Cheney attempts to justify Birtherism on CNN, saying, "People are uncomfortable with a president who is reluctant to defend the nation overseas."

July 24: Obama says of his comments on the Gates arrest, "I could've calibrated those words differently."

July 30: Professor Henry Louis Gates Jr. and Sgt. Joseph Crowley go to the White House for a beer with the president and vice president.

Aug 11: William Kostric brings his 9 mm pistol to the president's town hall meeting in Portsmouth, N.H. He carries a sign saying, "It is time to water the tree of liberty" and seems to touch off a trend of bearing arms to town halls.