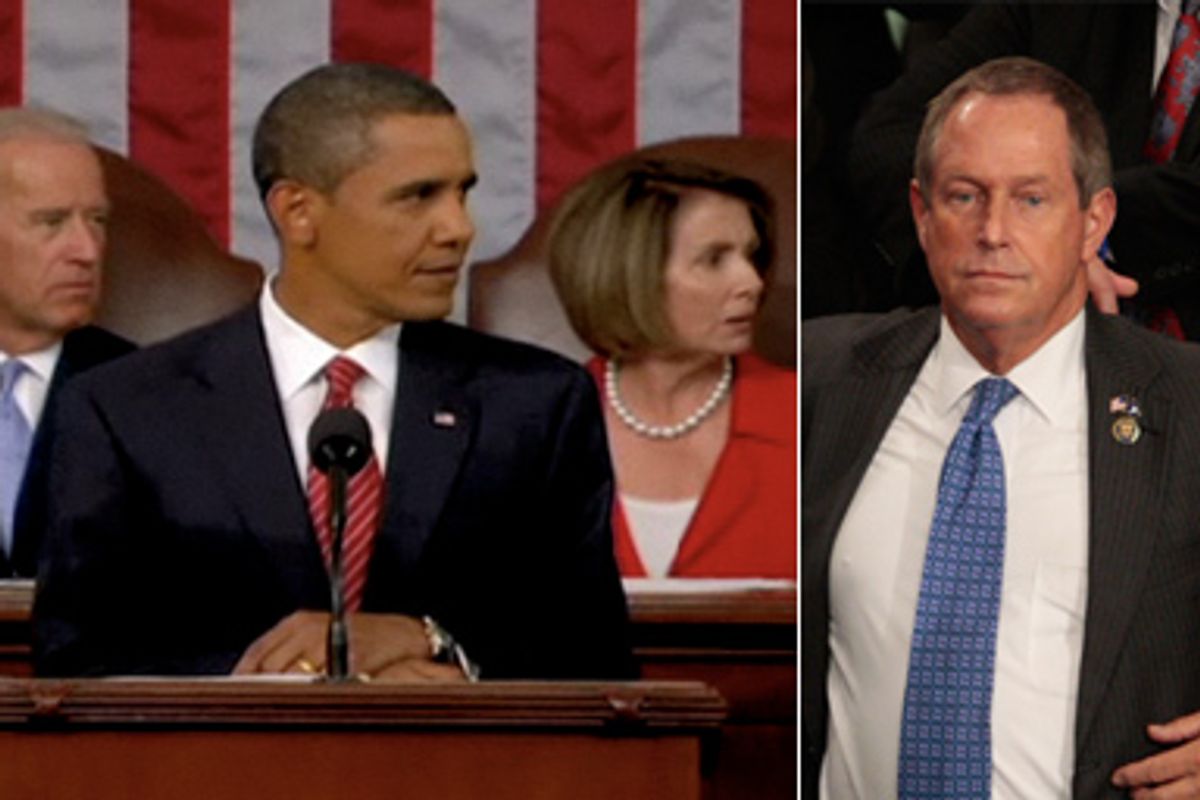 Now and then a moment occurs that clarifies the nature of American politics like a flash of lightning over a prairie landscape. Such a moment occurred on Sept. 9 during President Obama's televised address to a joint session of Congress about healthcare. As the president explained that illegal immigrants would not be eligible for benefits under the plan he supported, Joe Wilson, a conservative Republican member of Congress from South Carolina, shocked the chamber and the television audience by shouting, "You lie!"

Set aside the rich symbolism of the fact that the nation's first black president was rudely challenged by a conservative politician from South Carolina, the most radical of the antebellum Southern slave states, the home of John C. Calhoun, theorist of states' rights and slavery, the place where the first shot of the Civil War was fired at Fort Sumter. In a blazing moment the incident illuminated the continuing entanglement of the politics of race and the welfare state in America.

The American social insurance system is minimal compared not only to the countries of Scandinavia and continental Europe but also to other English-speaking nations like Britain and Canada, both of which have universal healthcare programs. In 2008, the U.S. spent only 19 percent of GDP on social programs, compared to nearly 30 percent in both Sweden and France.

From the beginning, attempts to create a universal welfare state in the U.S. have been thwarted by the fears of voters that they will be taxed to subsidize other Americans who are unlike them in race or ethnicity or culture. The original Social Security Act passed only after domestic workers and farmworkers -- the majority of black Americans, in the 1930s -- were left out of its coverage, at the insistence of white Southern politicians. Aid to Families With Dependent Children, a New Deal antipoverty program that became identified in the public mind with nonwhite "welfare queens," was a target of popular resentment for half a century before it was finally abolished by the Republican Congress and President Bill Clinton in the 1990s.

Racial resentments undoubtedly explain the use of "redistribution" and "socialism" as code words by John McCain, Sarah Palin and Republican working-class mascot "Joe the Plumber" during the 2008 presidential campaign. Similar themes have surfaced during the healthcare debate. Among the many popular fears that conservative opponents of healthcare reform play upon is the anxiety that elderly working Americans will have their Medicare benefits cut, or might even be encouraged to volunteer for euthanasia, to subsidize healthcare for the country's 12 million or so permanently resident illegal immigrants: "Kill Grandma to pay for Pedro."

The stereotype of the welfare-dependent Latino illegal immigrant appears to have replaced the black inner-city welfare recipient as the "other" in the imagination of many Americans suspicious of further expansion of the federal social insurance system. This explains Rep. Wilson's outburst that President Obama had to be lying when he said that illegal immigrants would not benefit from healthcare reform. Another conservative Republican named Wilson, former California Gov. Pete Wilson, prospered politically from the native white backlash against welfare for illegal immigrants in California in the early 1990s, although the Republican Party subsequently suffered from alienating the state's growing Latino electorate. The Austin Lounge Lizards said it best, in their song "Teenage Immigrant Welfare Mothers on Drugs":

Since the 1964 Civil Rights Act destroyed formal white supremacy in the U.S., every attempt to expand traditional social insurance in America has failed. Meanwhile, there has been a massive expansion in government-sponsored welfare going disproportionately to the white and affluent. What the political scientist Christopher Howard calls the hidden welfare state includes the tax-favored employer-provided health insurance that most working-age Americans depend on, as well as the home mortgage interest deduction and the childcare and child tax credits. Affluent and educated workers are more likely to work for employers who provide private health benefits than are low-skilled workers and employees of small businesses. Personal tax benefits like the home mortgage interest deduction are available only to the top half of households who pay federal income taxes, and are unavailable to lower-income workers who pay payroll taxes but no income taxes. In many cases, the benefits of this tax-credit welfare state increase with income.

There is even a nonrefundable "childcare tax credit" available only to the relatively affluent families who pay income taxes in addition to payroll taxes. There's no publicly provided or subsidized daycare to help out the nanny who takes care of the rich brat, but the taxpayers subsidize the rich brat's parents when they employ the nanny.

Is it a coincidence that following the Civil Rights Act white Americans stopped expanding the traditional welfare state and instead started building a private, income-based welfare state for themselves? Could it be pure coincidence that the most generous welfare states in the world have been those of ethnically homogeneous Nordic countries where, until recent immigration, nearly everyone was related to everyone else? Is the classic welfare state really a form of ethnic nepotism most likely to be adopted by a homogeneous, indeed tribal, nation-state?

Recent scholarship supports the hypothesis that ethnic diversity tends to be inversely correlated with generous, universal social insurance. In a 2001 paper titled "Why Doesn't the US Have a European-Style Welfare State?" Alberto Alesina, Edward Glaeser and Bruce Sacerdote wrote that "race is critically important to understanding the US-Europe differences" and that "hostility to welfare comes in part from the fact that welfare spending in the US goes disproportionately to minorities."

Social Security and Medicare, the two major examples of universal social insurance in the U.S., were enacted during a half-century between World War I and the 1970s when the foreign-born percentage of the U.S. population was at an all-time low and ethnic differences were fading rapidly in a white majority that made up a secure nine-tenths of the population. Arguably a sense of post-ethnic, pan-white nationalism, combined with a small nonwhite majority consisting almost entirely of African-Americans, is one of the reasons, if not the major reason, that the U.S. came closer to European social democracy between 1932 and 1968 than in the periods of greater immigration and cultural heterogeneity that came before and afterward.

The tension between diversity and solidarity is a problem for both wings of the Democratic Party in the United States. In an increasingly diverse society with population growth driven by immigration, it will be even harder for the social democrats on the left wing of the Democratic Party to persuade the dwindling number of native white voters of the merits of universal policies that could benefit both them and the newcomers. But if immigration-driven diversity dooms ambitious plans for social democracy in America, it may be an even greater obstacle to the less expensive, targeted, means-tested programs favored by centrist Democratic neoliberals. After all, means-tested programs by design would exclude most of the white working and middle class, and benefit the nonwhite, increasingly foreign-born working poor even more visibly than universal programs, at even greater cost in their political viability.

Is there any way out of this trap for liberals who wish to preserve (as I do) a relatively generous legal immigration policy, even though the diversity that results continues to undermine support for redistributionist social insurance and safety net programs? Maybe. The solution may be corporatism or corporate paternalism -- by which I mean the mandatory universalization of private employer benefits. If the politics of ethnic diversity makes movement in a universalist, social democratic direction impossible in the U.S., then the alternative might be to mandate that all employers provide certain benefits to all employees, with no exceptions. The costs of such unfunded mandates might drive some small businesses out of existence. But small-business owners are the most vocal opponents of wage and benefit reform in the U.S. The replacement of Scrooge & Marley by a smaller number of bigger private and public employers who treat Bob Cratchit and Tiny Tim better would not necessarily be a tragedy.

What Winston Churchill said about democracy can be said about the welfare state as well. In a country as pluralistic as the U.S., liberal corporatism may be the worst kind of welfare system, except for all the rest.