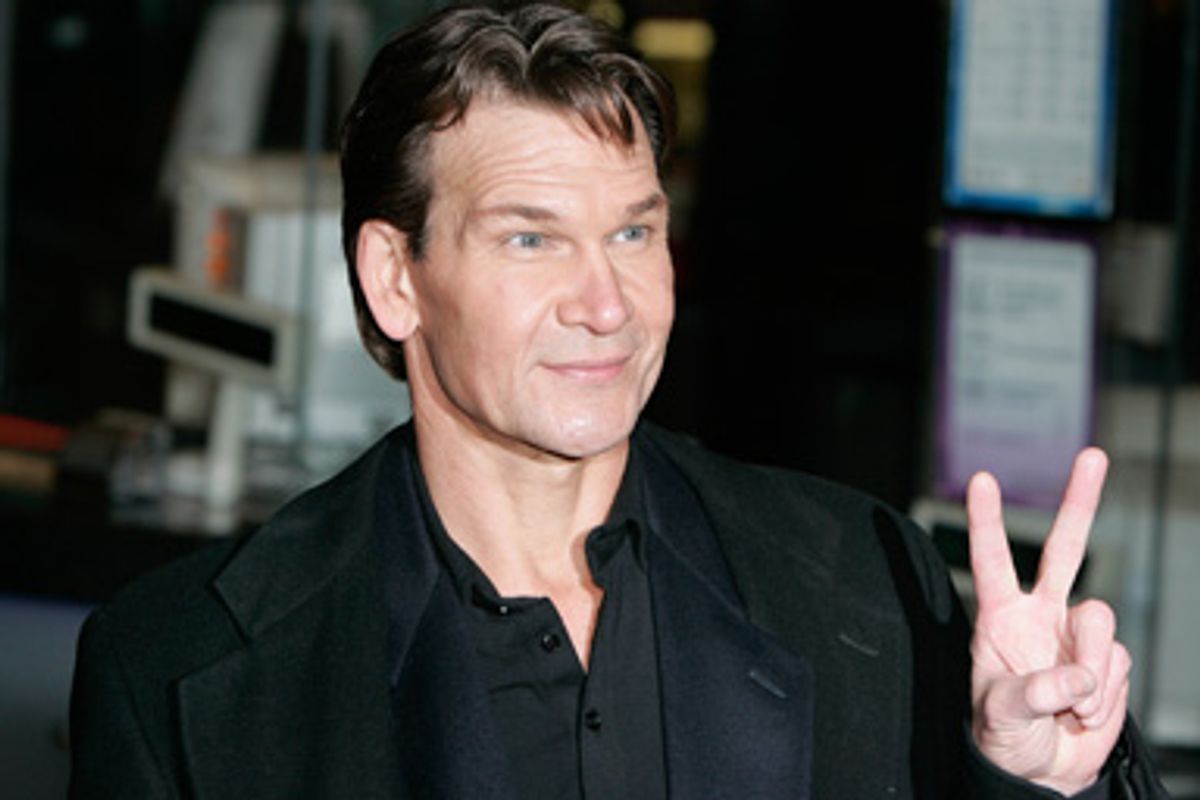 U.S. actor Patrick Swayze gestures to fans as he arrives at the world premiere of "Keeping Mum" at the Vue cinema in Leicester Square, London November 28, 2005.
--

Patrick Swayze, the actor, dancer and singer best known for his roles in "Ghost" and "Dirty Dancing" died of pancreatic cancer Monday at the age of 57. Since news of Swayze's death first became public, stars who knew and worked with Swayze, as well as critics, have responded with memories of Swayze as a kind, thoughtful man both on and off the screen. Here is a look at how Swayze is being remembered the day after his death.

Demi Moore: "Patrick you are loved by so many and your light will forever shine in all of our lives."

Whoopi Goldberg: "Patrick was a really good man, a funny man and one to whom I owe much that I can't ever repay ... I believe in 'Ghost's' message, so he'll always be near."

Alyssa Milano: "RIP Patrick. You were a great talent. And more importantly ...  a true gentleman."

C. Thomas Howell: "... it was our passion for horses that forged a friendship between us that I treasure to this day."

Jennifer Grey: "Patrick was a rare and beautiful combination of raw masculinity and amazing grace. ... He was a real cowboy with a tender heart. He was fearless and insisted on always doing his own stunts, so it was not surprising to me that the war he waged on his cancer was so courageous and dignified."

Larry King: "Patrick Swayze was a wonderful actor & a terrific guy. He put his heart in everything. He was an extraordinary fighter in his battle w Cancer."

Betsy Sharkey, Los Angeles Times: "The truth is, Swayze just never fit the Hollywood hunk mold, though he had that reddish brown hair, blue-sky eyes, chiseled cheeks and equally chiseled abs going for him. There were no strange eccentricities, no sex tapes to be leaked. He was, by all accounts, a professional on set, a worthy colleague for any actor who played opposite him whether friend or foe; kind to the crew; generous to a fault; sentimental and not ashamed of it."

Kurt Schlosser, MSNBC: "Although Patrick Swayze's movies never ended up on my must-see lists year after year, a recent surf through YouTube reminded me that I do have some fond memories of his work ... I think that appreciation is rooted in the fact that, for me, he was a B-movie action/romance star who wasn't afraid to come across as rather comical. And that's not to disrespect his body of work, which at the time was well-regarded by audiences, if not critics. But somehow I imagine that after a certain amount of time Swayze, too, may have found some humor in his cinematic legacy."

Joe Neumaier, New York Daily News: "Patrick Swayze, who died Monday at age 57 from complications of pancreatic cancer, was known for a handful of film roles that melded a retro manliness with sensitive swagger. While no one would confuse Swayze with James Dean, some of the dancer-turned-actor's strongest turns showcased an adept ability to be both rock solid and soft-hearted."

Jesse Baker, NPR: "Swayze is not often acknowledged as an actor with broad range, but at times he played against type. In To Wong Foo, Thanks for Everything, Julie Newmar, he sported a bustier and a garter belt as the drag queen Vida Boheme. He robbed banks in a Nixon face mask and was on the run from Keanu Reeves in the 1991 film Point Break."

CNN: "Swayze, known as a down-to-earth, nice-guy actor, was determined not to follow a predictable career path. He followed 'Dirty Dancing' with 'Road House' (1989), in which he played a manager of a rough-and-tumble bar (the film was particularly popular on late-night cable)."