After months of delay, the compromise plan makes its debut -- and flops 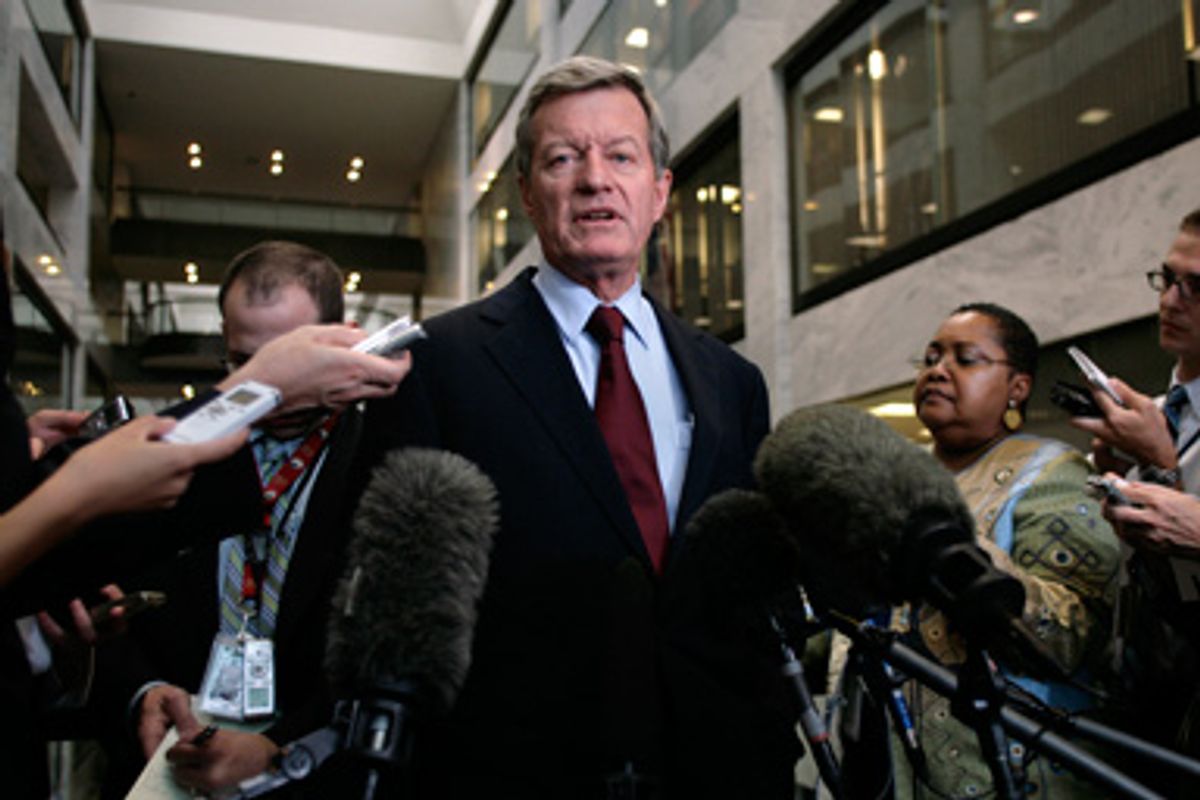 If you were wondering what, exactly, has been taking so long in the healthcare reform process, the short answer is, the Senate Finance Committee. Chaired by Max Baucus, the senior Democrat from Montana, the Finance Committee shares jurisdiction over healthcare, and so got to take its sweet time producing a bill over the summer as the “Gang of Six” -- a group of three Democrats and three Republicans from the committee -- negotiated. Now the bill is done, and has been released; next, it'll go to to the committee for members to try to modify -- what’s called “mark-up.”

The Gang of Six effort demanded deference from Democrats all summer because, the argument went, it was the only process by which they might gain some Republican support. Three of the six, after all, were Republicans. But that turned out to be much easier said than done. By the time Baucus released his bill today, all the Republicans had jumped ship on him. The Finance Committee is now looking at a one-party bipartisan compromise. Still, if conservative Democrats ultimately prove unwilling to vote for a stronger bill, the compromise position carved out by Baucus could be reform's only path to passage.

So what’s in the bill? $856 billion of spending over 10 years, first of all. Like every proposal under consideration, the Finance Committee bill would prohibit insurance company discrimination and policy “rescission” based on preexisting conditions. This bill would, however, permit significant premium differentiation based on risk factors such as age and geographic location. Medicaid would expand to cover those with incomes up to 133 percent of the federal poverty line. Up to 400 percent of the poverty line, Baucus wants to offer various kinds of sliding-scale tax credits to offset premiums.

The Baucus bill would open up the insurance exchange markets to firms with up to 50 employees, and give states the option to expand that number up to 100. By 2022 at latest, however, all firms would be eligible. But, despite the president’s urging, there would be no public option on that exchange. Instead, the proposal includes an idea from Sen. Kent Conrad, D-N.D., to create healthcare co-ops to pool the purchasing power of the otherwise uninsured to negotiate down premiums.

To pay for his reforms, Baucus would try to extract excess costs from Medicare, and also suggests a tax on so-called Cadillac health insurance plans.

Baucus has got his doubters. On the right, Senate Minority Leader Mitch McConnell said of the would-be compromise bill, “This partisan proposal cuts Medicare by nearly a half-trillion dollars, and puts massive new tax burdens on families and small businesses, to create yet another thousand-page, trillion-dollar government program. Only in Washington would anyone think that makes sense, especially in this economy.”

Sen. Mike Enzi, R-Wyo., a member of the Gang of Six, expressed disappointment as well. “Unfortunately, there are fundamental issues that we were not able to resolve by the deadline that was set for us. I am deeply disappointed that we could not take the time to find ways to resolve these issues.”

Democrats, however, wish there really had been a hard deadline. Liberals tend to think that the Finance Committee has spent the summer frittering away their party’s political capital for a compromise that the other party has no interest in. Sen. Ron Wyden, D-Ore., a Finance Committee member and noted health wonk who was not included in the Gang of Six, is concerned that the subsidy-and-credit scheme in the Baucus bill is too weak to make a difference for the middle class. Sen. John Kerry, D-Mass., objects to Baucus’ plan to impose a $4 billion fee annually on medical device manufacturers. And Sen. Jay Rockefeller, D-W.Va., who is actually the chairman of the Finance subcommittee on health -- but was excluded from the Gang of Six -- says the bill is unacceptable without a public option. "I want to make clear that in its current form I cannot put my support behind the Finance bill — it will not have my vote," Rockefeller said Tuesday.