An insider account of the White House during the height of the financial crisis achieves the impossible: Pity 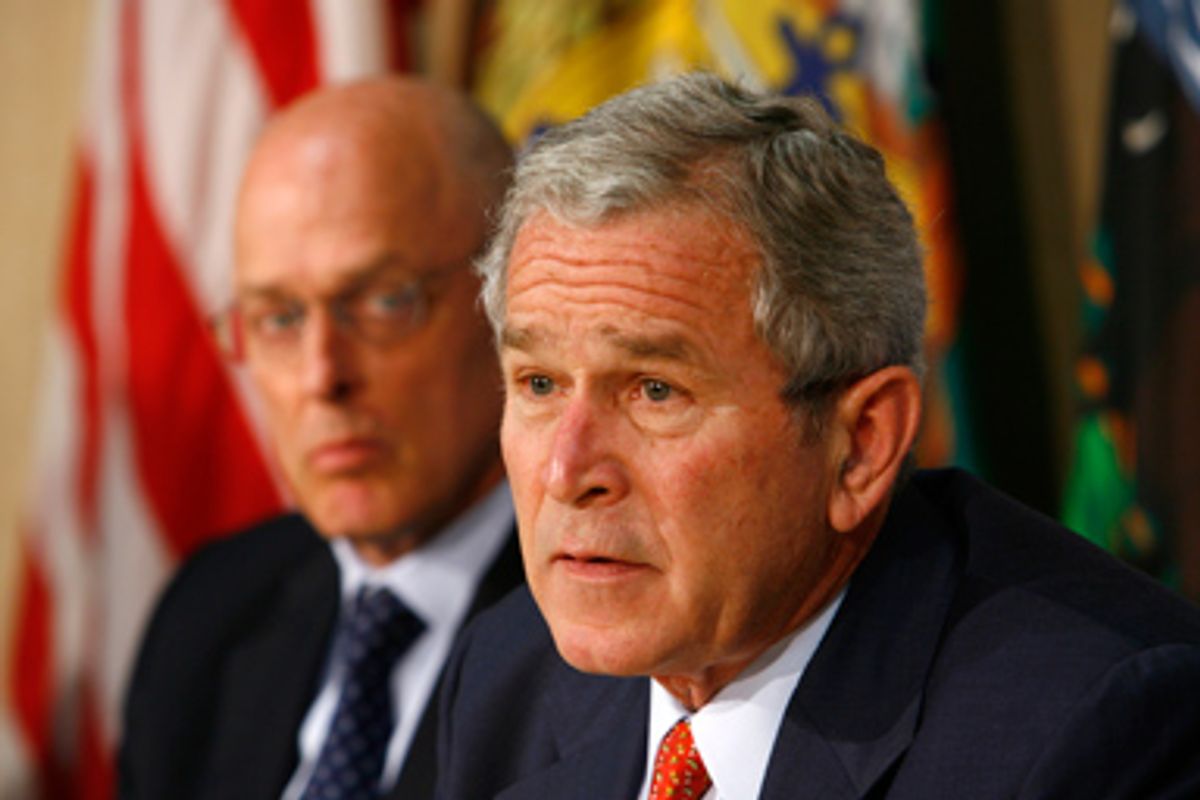 U.S. President George W. Bush speaks during a meeting with members of his economic team at the Department of Energy in Washington July 11, 2008. At left is Treasury Secretary Henry Paulson.
--

What's the first lesson to be learned from Matt Latimer's amazing account in GQ of the Bush White House during the height of the financial crisis?

Never trust a speechwriter not to spill the dirt. Fish gotta swim, birds gotta fly, and writers gotta write. You'd think that a man who says that he had always "dreamed of heading to Washington to work for a conservative president and help usher in another Reagan Revolution," would be loyal to the cause. But with the kind of material Latimer was sitting on, who can blame him for grabbing a book deal and telling all?

My colleague Alex Koppelman cherry-picked some of the more politically explosive quotes grabbed by the New York Daily News yesterday. But the GQ excerpts are even more revealing for the picture drawn of a White House that had no clue what to do about the economy, and did not even remotely understand what its own treasury secretary was proposing to do to fix the mess.

We wrote speeches nearly every time the stock market flipped. Meanwhile, the White House seemed to have ceded all of its authority on economic matters to the secretive secretary of the treasury. The president was clearly frustrated with this. I was told that at one Oval Office meeting, he got very animated and exclaimed to Paulson, "You've got to tell me what you're doing!" (In the weeks that followed, Paulson changed his spending priorities two or three times. Incredibly, he'd been given the power to do with that money virtually anything he pleased. All thanks to a president who didn't understand his proposal and a Congress that didn't stop to think.)

OK, much as it pains me, I can forgive the president for not understanding what Paulson was doing. No one understood what Paulson was doing, including the secretary himself, as was clear from his testimony to Congress. But at least Paulson was doing something. The global economy was crashing and he felt a responsibility to act. But the White House, in general, was helpless: An imminent depression simply did not fit into the ideological parameters of an administration that had hitherto determined economic policy according to Karl Rove's political calculations. The brutal fact is that an administration that prided itself on not being reality-based had no idea what to do when reality could not be ignored.

At one point, Bush, faced with congressional resistance to the TARP bailout plan, cries out in rage to his assembled aides, "Then why the hell did I support it if I didn't believe it would pass?" But no one had an answer for the president, because there was no good answer.

Perhaps Matt Latimer's most astounding achievement is to make one feel a little sorry for Bush. The poor man was so clearly in the wrong place at the wrong time -- and history will never let him or us forget it.

Finally, this might be one self-serving tell-all account that is actually worth buying, if only because Latimer displays a cutting dry humor that one does not expect from your typical Republican apparatchik.

We were chatting casually when the president's favorite speechwriter came in. Chris Michel was in his midtwenties, with sandy blond hair. He was usually chipper, though at the moment his face was so pale he must have been the whitest man in the Bush White House. And that was no small accomplishment.