Can Michelle Obama save healthcare reform? 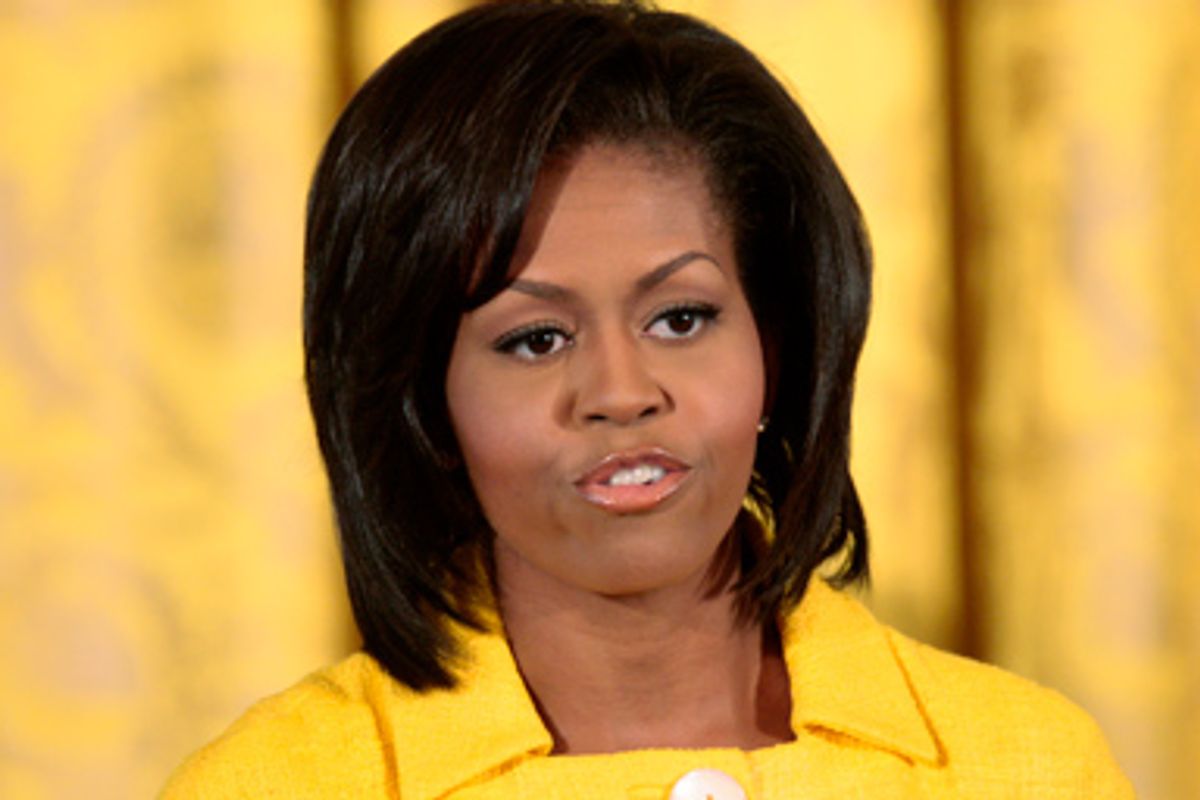 These days, it seems the White House and Congress have exhausted just about every possible argument and advocate in the healthcare debate. But President Obama may still have an ace in the hole: his wife, Michelle. As Nia-Malika Henderson at Politico reports, the first lady is planning to step into the political spotlight this week, declaring a "dedicated focus" on healthcare reform.

Uh, did anyone else hear that sound? Oh, that's right. It's the conservative backlash machine revving up, as visions of "Hillarycare" dance in Republican heads. Surely neither side of the aisle has forgotten the failure of Clinton's plan, or the hand the right had in killing it and humiliating its champion. Will Michelle Obama leave herself open to the same criticism?

According to Henderson, it isn't likely. Obama seems poised to focus on how her husband's plan will affect families, studiously avoiding any in-depth policy debates. As Camille Johnston, Obama’s director of communications, puts it, "She will spend her time focusing on where policy and people intersect." Henderson's take on the first lady's role is a bit less gentle: "She’ll make the soft, soccer-mom sell, highlighting the need to eat healthy, exercise and get preventive care." (Never mind that two of those three directives are only tangentially related to the insurance reform issues at hand.) Using her 70-plus percent approval rating to her advantage, writes Henderson, Obama is expected to make healthcare reform "friendly" and "noncontroversial."

In other words, Obama appears to be staying as far from Hillary Clinton territory as possible. Of course, Michelle has always distanced herself from Clinton's legacy, vocally renouncing any interest in shaping policy -- and perhaps with good reason. As Rebecca Traister wrote shortly after last year's election, in a piece titled "The momification of Michelle Obama," "Powerful couples must now tread as far as possible from the 'two for one' talk, lest the female half get smacked with a nutcracker." Henderson interviews first lady historian Myra Gutin, who sums up Obama's contribution to her husband's presidency: "She is very popular, very well-liked; she’s planted the garden, done a lot of traveling — but it’s a much more ceremonial activity. It’s more of a traditional role."

Now, I don't want to say that Michelle Obama shouldn't be allowed to eschew politics and focus instead on a more "traditional" first lady identity, if that's what she prefers. But if she really has something to say on healthcare, I'd like to see this intelligent, experienced woman speak up. The "Hillarycare" backlash may be daunting, but, as Richard Kirsch of Health Care for America Now tells Henderson, "Women are the swing voters on health care." So don't we deserve a serious discussion of the legislation, rather than a handful of platitudes on fitness and nutrition? And is there anyone better to lead that conversation than Michelle Obama?