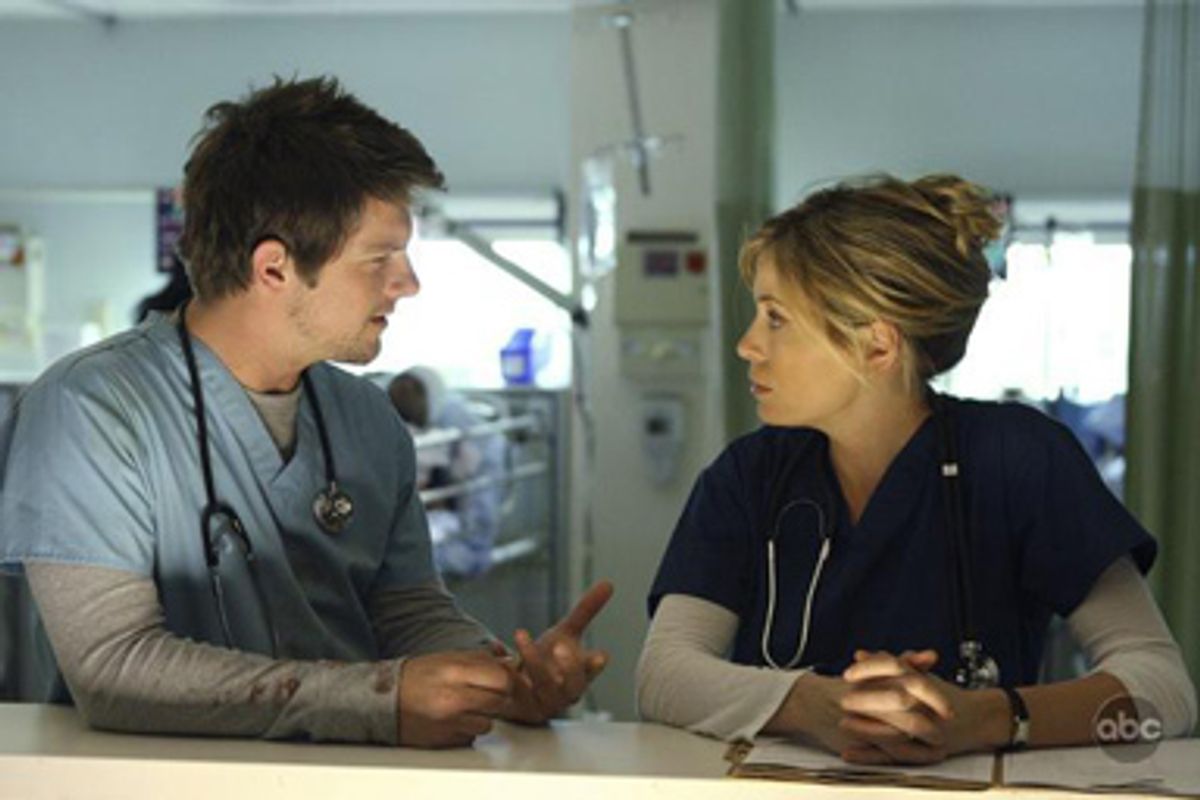 "I'd like to buy the world a roofie, and keep it company." ABC network executives must be humming this tune to themselves as their anticipation builds around the premiere of "Flash Forward" (8 p.m. Thursday. Sept. 24), a dark new drama series in which the entire population of planet Earth passes out for two minutes and 17 seconds. Afterward, the populace wakes up to a world in chaos: Cars are wrecked all over the roads, helicopters and planes have fallen from the skies, and citizens are wandering the streets, stunned and bleeding. As the entire planet grapples with a hangover of epic proportions, they discover that, while unconscious, each person had a vision of what he or she would be doing six months in the future.

Just as Coke's '70s-era jingle reflected a sweet, hopeful rainbow of earthlings prone to singing idealistic tunes with little provocation, "Flash Forward" leans into these gloomy times with an undeniable relish. This is the island from "Lost" on a global scale, with a little "Jericho" and "Fringe" thrown in for good measure: Something big and mysterious has occurred, the end may be near, and we can only guess that terrorists, corrupt corporations and high-level conspiracies are involved.

"Something about Baltimore, a hand!" says Mark Benford (Joseph Fiennes), an FBI agent who, when he's unconscious, sees himself piecing together clues about the global blackout and what it means. In his vision, he swigs from a flask and tries desperately to make sense of random clues as assassins in black close in around him.

Meanwhile, his wife, Olivia (Sonia Walger), hallucinates that she's having an affair with another man. "I don't understand! I would never cheat on you!" she sobs to her husband. Ah yes, that's what they all say. But here comes the lover man from her vision (Jack Davenport), striding purposefully into the hospital where she works. (I'm not sure why she'd cheat on Joseph Fiennes with that guy, either.)

Not all of the visions from this worldwide fainting spell are negative. Bryce (Zachary Knighton), a doctor and colleague of Olivia's, is about to kill himself when the blackout takes place. He wakes up believing that he's been given a second chance, that he's destined for greater things. "It was like a sign from God or something," he tells Olivia.

Likewise, Mark's A.A. sponsor Aaron (Brian F. O'Byrne) has a vision that his daughter, who was killed in Afghanistan, is still alive. "I don't know what to think. I'm confused, I'm hopeful ... and I'm angry that I'm hopeful," Aaron tells Mark. "You're worried that your future's gonna come true. I'm worried that mine won't."

But Mark's partner, Demetri Noh (James Cho), claims that he didn't have a hallucination. He confides to Mark that he's worried -- maybe this means he'll die in the next six months! -- but something in his eyes tells us that he's lying. Maybe he's one of the snipers in black, trying to kill Mark?

You have to love a fall pilot that can incite paranoid thoughts within minutes. And who doesn't enjoy the eerie mood and the sense of mystery and doom built into this picture? No one has any idea what's going on. And in contrast to the limited scope of similar serial dramas, this phenomenon affects everyone on the planet. "I had a bad dream," says Mark's young daughter, Charlie. "I dreamt there were no more good days." Cue theme from "Twilight Zone." (Why do the little kids always get the best lines?)

And don't get me wrong, this pilot is wildly cheesy, cheesy in ways that only an aggressively slick, suspenseful heir to "24's" throne can be. But with such a knockout concept at its core, "Flash Forward" may still be on our minds six months from now -- that is, if we're not too busy piecing together global mysteries or cheating on our husbands to notice.