The naked opportunism of "Jennifer's Body"

Megan Fox plays one of the undead: How can you tell? 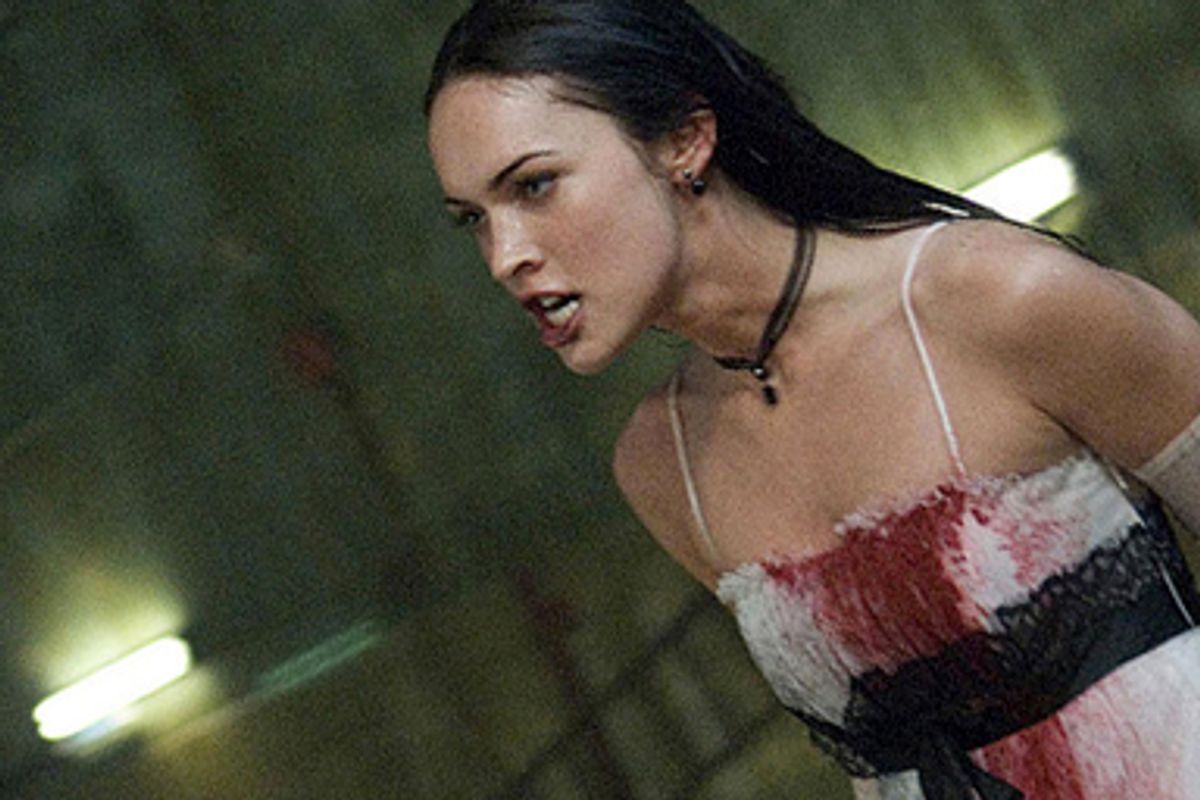 If "Jennifer's Body" were either entertaining or ultimately had a point, it would have a good enough reason for existing. Even if its star, the bodaciously built Megan Fox, were sexy in anything but a plastic way, you could make an argument for it as gore-fest eye candy. But "Jennifer's Body" -- directed by Karyn Kusama, from a script by Diablo Cody -- is so contemptuous toward its own characters, and its audience, that it chokes off any visceral thrills it might have offered. The movie substitutes calculation for brains, and the filmmakers seem to think we'll all be too stupid to notice. I can't remember the last time I saw such a naked display of opportunism and exploitation at the movies -- and when I use the word "exploitation," I don't mean the good, old-fashioned grindhouse kind, but the "Let's make a buck by pretending to be transgressive" kind, the kind that really makes you feel dirty.

Fox plays Jennifer, a decidedly not-nice high school hottie who practically leads her lifelong best friend, the sweet, brainy Needy (Amanda Seyfried), around on a leash. When Jennifer decides she wants to check out a mopey indie band that's playing at the local roadhouse -- Jennifer and Needy live in a tiny Midwestern town called Devil's Kettle -- she intimidates Needy into coming along, even though that requires Needy to skip out on a date (and, probably, sex) with her cute boyfriend, Chip (Johnny Simmons, who resembles a junior David Johansen). Jennifer has her sights on the band's lead singer (played by Adam Brody, with eyeliner), but she's so sexually voracious that anyone in her immediate sphere is fair game. When Needy points out that one of their classmates, an Indian, is also at the club, Jennifer wonders aloud if he's been circumcised. "I always wanted to try sea cucumber," she muses aloud, with a dead look in her eyes.

That's not the first of the many, many sexually forthright wisecracks in "Jennifer's Body," each one announced boldly and declaratively with a big cushion of air around it, so we'll have plenty of time to register how groovily plainspoken and sexually open these characters are. They wear their grrl power the way their more timid forebears wore Love's Baby Soft in the '70s -- sprayed on liberally.

Just as Jennifer seems to be making some headway with Mr. Indie Rock, a series of events, including a fire that appears to have been started telekinetically (the movie raises the suggestion and never pursues it), instigates a personality change in her. Well, sort of. If Jennifer wasn't very nice before, haughtily strutting down the halls at school, looking down her nose at the inferior beings slouching around her with their hoodies and their piercings, suddenly, she's majorly not-nice -- as in "luring unsuspecting jocks into the woods and pulling their entrails out with her teeth" not-nice. (In your notebooks, please jot this down as a metaphor for the insatiable sexual appetite of womankind, and the degree to which men fear it. Because, yes, it will be on the exam.) Meanwhile, Needy looks on, wide-eyed -- it's the only expression she's got -- as her best friend just gets meaner and meaner. And also, at least on her good days, prettier and prettier.

"Jennifer's Body" (which takes its title from, but has nothing to do with, the Hole song of the same name, which is used over the closing credits) is conceived and constructed to mimic a traditional horror picture except -- novelty alert! -- it's been made by women. Kusama made ripples in the indie film world with her first picture, "Girlfight," which she followed up with the decidedly non-indie "AEon Flux." Her partner in crime, Cody, has practically become a household name -- albeit one adorned with girlie tattoos -- since her success with "Juno," a movie that has its own vehement fans and detractors: There seems to be very little in-between.

I'm in the pro-"Juno" camp: Cody's dense, rapid-fire dialogue, peppered with slang so hip that it became passé the moment it left the character's mouths, drove me crazy at first. But Cody and the film's director, Jason Reitman, also did the work of putting that dialogue in the service of a generous and emotionally direct story: "Juno" is about the way sometimes the biggest choices we make in life aren't things we can articulate, justify or rationalize to other people.

In "Jennifer's Body," the dialogue serves nothing, except perhaps Cody and Kusama's egos. The picture allegedly contains ideas, but they're really just disembodied, brainless organisms -- they're not attached to anything in the narrative in a way that makes sense. In one sequence, Kusama cuts between the sweet-but-boring sex Needy is having with her boyfriend and Jennifer's all-out blood-feast freakout. Is that just cool cutting? Or is it meant as an unfavorable comparison between nice sex and hot sex? There's no way to tell, and the actors don't tip us off, either. Seyfried is an extremely promising, if yet untested, actress -- she had a spectacular glazed spaciness in "Mean Girls." But here, as the dowdy, stringy-haired, afterthought friend, she mostly just cowers behind her spectacles. At least she's a human presence: Fox's charms, first in "Transformers: Revenge of the Fallen" and now here, elude me. She's a glossy blank, and her character is constructed and played so that her actions are inscrutable. The movie awkwardly frames her predicament as a kind of revenge against the male sex. But her viciousness -- she preys mostly on nice, or at least OK, kids -- is neither cathartic, nor does it make us recoil in horror. Her evil is shiny, hard and cheap, like something she bought at Forever 21.

Kusama borrows freely but joylessly from movies like Brian De Palma's "Carrie" and "The Fury," pictures that do recognize the sexual power of young women. (Another is the marvelous 2000 "Ginger Snaps," by Canadian filmmaker John Fawcett, in which a werewolf girl discovers that her menses aren't the only thing regulated by the moon.) All of these borrowed references -- from bloody prom dresses to bodies that hover just beneath the ceiling in menacing watchfulness -- are presented with a self-aware smirk. There's no affection in them, only affectation.

And they're just filler for the big showstopper, anyway: Line up now, guys, for the gratuitous lesbo makeout session. Watching two women kiss, when it's done right, is a glorious thing. And the effectiveness of a girl-to-girl kiss has as much to do with attitude as with presentation: David Lynch got it right with the gorgeous, deeply erotic love scene between Naomi Watts and Laura Elena Harring in "Mulholland Dr."; so did John McNaughton in the frankly, joyously exploitative "Wild Things" -- the kissing scene between Denise Richards and Neve Campbell is a woozily sexy thrill ride that also happens to serve the story. Both are honest approaches. But a kissing scene can also be a cheap attempt to titillate the audience, particularly when it has no real context or reason for being -- it doesn't matter if there's a man or a woman behind the camera. Needy is certainly in thrall to Jennifer, possibly sexually. But Jennifer treats Needy so badly, it's impossible to understand how these two women could be friends, other than out of habit (they've been pals since childhood). And as Jennifer, Fox's mannequin eyes are lifeless; they betray an attraction to no one -- there's no sex in her sexiness. The kiss comes from nowhere and leads to nothing. Its calculated eroticism is enough to make you long for the tyranny of the male gaze.