"Love Happens" -- and it stinks 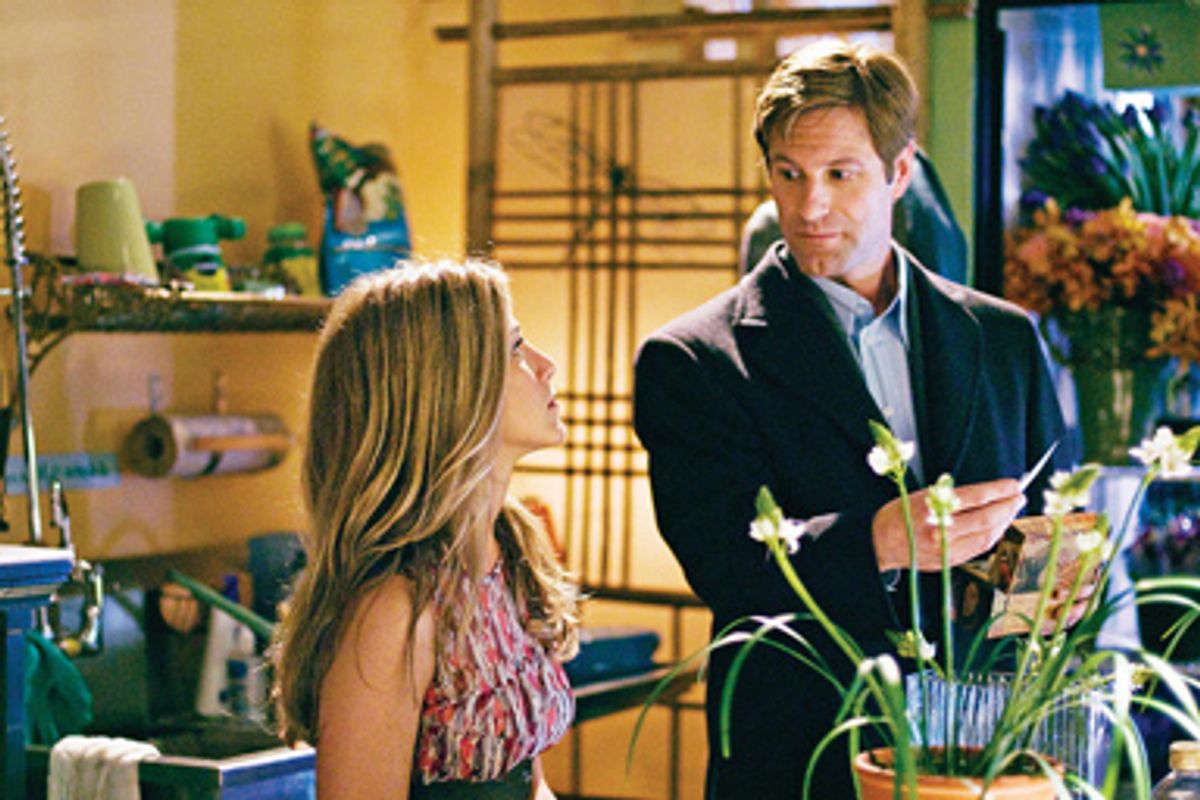 "Love Happens" isn't a romantic comedy, and maybe it would be more effective, or at least just livelier, if it were. Instead, it's a limp romantic drama that occasionally lifts its drowsy head to attempt a wan smile, a picture that starts out being harmlessly dull and ends, somehow, in a place that feels insultingly manipulative. Maybe there are worse ways to spend 90 minutes in a movie theater, but right now I can't think of one.

Aaron Eckhart plays Burke -- that's his first name -- an earnest-looking grief guru who runs popular seminars designed to help people get over the loss of a loved one. The seminars grew out of a book he wrote as he attempted to grapple with his own wife's accidental death. The book became a bestseller; the hitch is that it didn't really help Burke kick his own grief habit. He still hasn't adjusted to life without his wife, and he still feels guilt over her loss. It doesn't help that her ex-Marine father (played by Martin Sheen) does stuff like march up to Burke during one of his seminars and kick him in the pants -- figuratively speaking -- for being so cowardly about accepting the reality of his wife's death.

Into this cheery scenario bursts Jennifer Aniston's Eloise, a florist who supplies arrangements for the Seattle hotel where Burke is holding his latest seminar. Burke has a chance encounter with her, in a hotel hallway, that intrigues him; when he sees her again, he asks her out. She rebuffs him by pretending to be deaf. Later, when he calls her out on her lie, she cuts him down with a speech about how he's probably just another married businessman, in town for a few days and looking for a fling. Ouch. But she has a good excuse: She's just broken up with her boyfriend after discovering he's been cheating on her. Humans do the darnedest things.

It takes forever and a day for Burke and Eloise to even get to their first date. And, strangely, there are very few scenes featuring the two of them together: Most of the air in "Love Happens" is sucked up by the grieving process, as we watch Burke's seminar attendees attempt to put their lives back together. Their grief is painful: You can see it, in particular, in the case of Walter (John Carroll Lynch), a contractor who lost his son in an accident. But director Brandon Camp -- this is his directorial debut, and he co-wrote the script with Mike Thompson -- lavishes so much attention on the grief stuff that he seems to forget he has potential lovers in his movie too. The movie strokes that grief chord over and over again, to the point of being fetishistic, playing on the emotions of anybody who's ever lost a loved one, in a way that feels claustrophobic and dishonest. I kept counting the minutes until I could escape its cloying, self-helpy vapors.

The bummer is that "Love Happens" feels slightly alive when Eckhart and Aniston are on-screen together. Eckhart has given effortlessly appealing performances in pictures like "Erin Brockovich" and "Possession." But he does need to be loosened up a bit: Left to his own devices, he has a buttoned-up, Dudley Do-Right quality. Aniston can be annoying as hell as an actress, but when she's good, she gives off a nice, flinty spark. In "Love Happens," these two misfire in every way possible, but in the rare moments we get to watch them together, they at least seem like two human beings attempting to connect.

But "Love Happens" isn't just about recovering from loss and once again finding love. It's also about the process of examining and reexamining feelings until they've been worn down to mere scraps, like bits of blanket obsessively fingered by a child. During the course of the movie Burke fulfills a long-neglected promise he made to his late wife: While she was alive, she asked him to free her pet "parrot," Rocky, into the wild if anything should ever happen to her. Eloise tells Burke he needs to do right by his late wife, and by Rocky. And so Burke dutifully steals the bird from the in-laws (who have been caring for it, somewhat grudgingly, since Burke skipped out on his promise) and sets it free in the forest.

Although I'm no bird expert, a quick Google Image search confirms something I suspected: The bird in question isn't a parrot, but a cockatiel. I also suspect that it's not really a good idea to release a domesticated tropical bird into the wilds of the Pacific Northwest, but what do I know? If Camp had been too persnickety about the parrot/cockatiel's needs, he wouldn't have been able to avail himself of this nifty plot point. The parrot/cockatiel isn't, by the way, seized and eaten. No harm befalls him, which is a very good thing: He's the only character in "Love Happens" worth caring about, because in his forthright, honest bird state, he never unduly milks our sympathy. Love does happen. But even when it's painful, it shouldn't hurt this much.