They blew billions on wars and bailouts, but spending cash that actually helps people seems to bother politicians 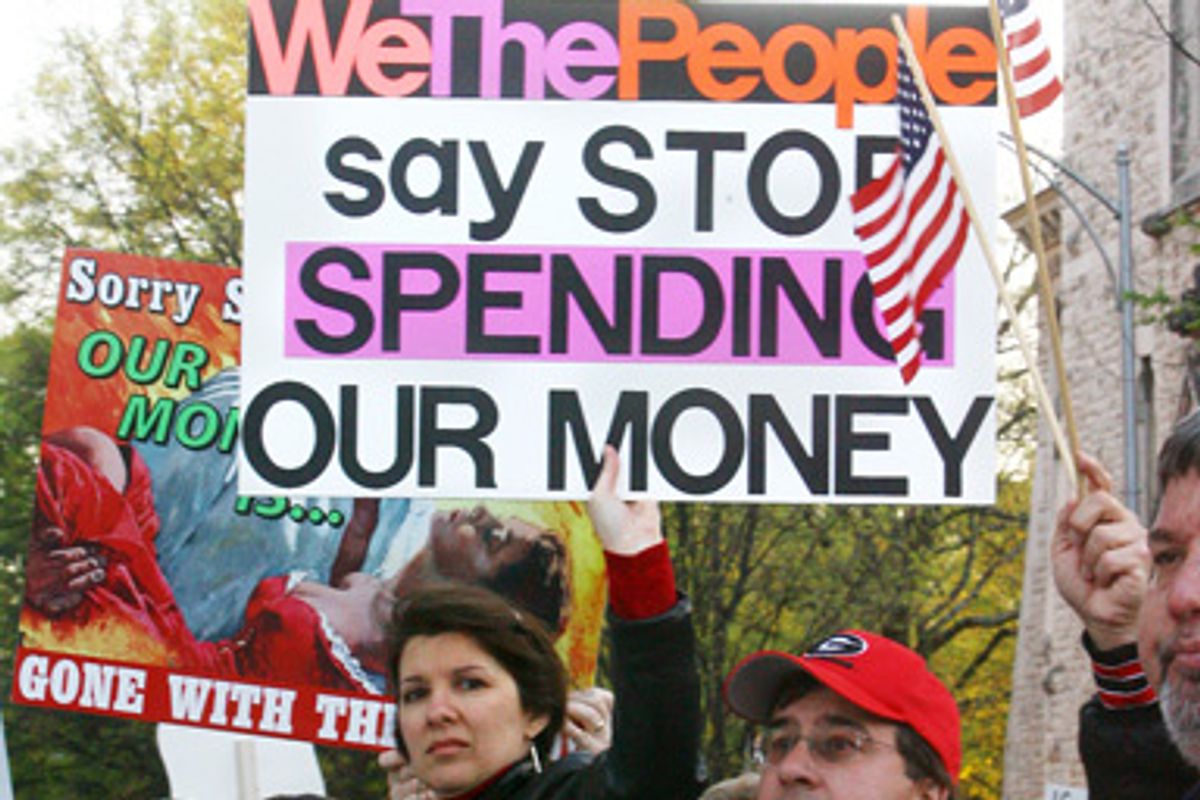 Gina Vaughn of Acworth, GA makes her opinion known as she stands on the barrier at the Atlanta Tea Party, Wednesday, April 15, 2009
--

Watching the healthcare debate unfold these days is a little like watching scenes from "One Flew Over the Cuckoo's Nest" -- the ones showing a collage of strung-out, deranged or otherwise incapacitated patients rotting away in a squalid psychiatric ward.

As the insurance industry's Nurse Ratched lurks in the background, congressional Democrats cower in the corner, fearing the phantom menace of their own shadows. Standing next to the window, suicidal Republican leaders rant about "death panels" and threaten to splatter their electoral prospects onto the pavement below. Nearby, White House officials struggle with multiple-personality ailments as they mumble contradictory statements about the public option. Meanwhile, tea party protesters lie on the floor in a fetal position, soiling their hospital diapers as they throw incoherent tantrums about everything from socialism to communism to czarism to Nazism. And, not surprisingly, Washington reporters just stare off into the distance, having been long ago lobotomized in the wake of their Watergate heyday.

Clearly, the inmates in America's political sanitarium are each struggling with different maladies. However, they are all suffering from Selective Deficit Disorder -- an illness whose symptoms can be particularly difficult to detect.

When we see tea party activists bemoan deficit spending or watch rank-and-file senators like Blanche Lincoln, D-Ark., say, "I'm not going to vote for a [healthcare] bill that's not deficit-neutral," it is easy to think these poor souls are perfectly healthy. When President Obama promises to "not sign a [health] plan that adds one dime to our deficit" and then New York Times writers such as David Brooks praise this "dime standard" as the epitome of "pragmatism" and "fiscal sanity," these victims seem absolutely sane.

Yet, Selective Deficit Disorder is a sickness of omission. Attacking the neural synapses that maintain rudimentary logic, it presents itself not in what its carriers say and do, but in what they refuse to say and do.

Where, for instance, were conservative organizations marching on Washington when President Bush vastly expanded the deficit with his massive tax cuts for the wealthy? Where was Sen. Lincoln's concern for "deficit neutrality" when she voted to give $700 billion to the thieves on Wall Street? Where was Obama's "dime standard" when he proposed a budget that spends far more on maintaining bloated Pentagon budgets than on any universal healthcare proposal being considered in Congress? Where were demands for "fiscal sanity" by Brooks and other right-wing pundits when they cheered on the budget-busting war in Iraq? Where were any calls for raising taxes from these supposed "deficit hawks" when they backed all this profligate spending? And where were the journalists asking such painfully simple questions?

They were nowhere, because those plagued by Selective Deficit Disorder (as the name suggests) are only selectively worried about deficits.

When it comes to spending on priorities like healthcare reform that would help ordinary Americans, the illness's victims scream about deficits and overspending. But when it comes to handing over trillions of dollars to financial firms, defense contractors and other corporate interests, deficits suddenly don't matter to the disease-addled politicians, protesters and journalists underwritten by those interests.

Luckily, while almost every significant voice in politics is stricken with Selective Deficit Disorder, the majority of the country's citizens are not. That doesn't mean Americans love unbalanced budgets, of course. It just means we know there is something very wrong with those who decry deficit spending on healthcare for millions of people, but ignore far bigger deficit expenditures on giveaways to a tiny handful of fat cats.

Now, all we have to do is stop flying over the cuckoo's nest and start breaking into the asylum.