The Sundance series finds beauty in the intrepid public servants of Newark, N.J. 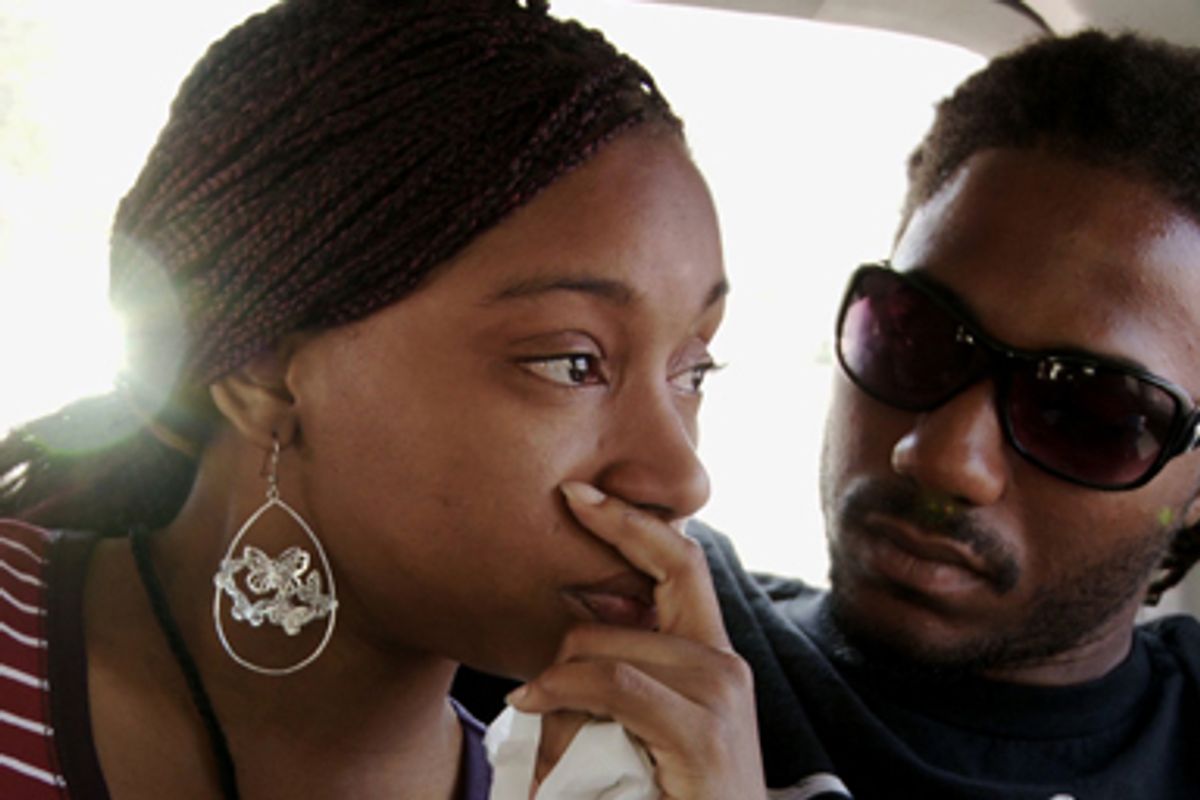 Jayda and Creep from The Sundance Channel's Brick City
--

Cynicism is a luxury item. You might be able to afford it, but not everyone can. If you're young, you can roll your eyes at the world without paying much of a price. If you're rich, you can shake your head and sigh from the comfort of your climate-controlled, pest-free, meticulously clean square footage.

But if you're poor or black or overweight or old or handicapped or depressed, if the world isn't coming up roses for you unless you fight hard, every day, to make it work, cynicism can mean a slow downward spiral to death. Once you've suffered loss or stumbled and fallen hard, cynicism looks less like harmless fun and more like quicksand.

Of course we all like to pretend that our nice things and our education and our highly professional, dry-cleaned existence means that we're above hope, that we don't have to believe in something like the little guy does, that we don't have to help out or worry or lend our voices to the voiceless. But that's all an elaborate game of make-believe.

You may be able to afford the luxury of cynicism now. But when cynicism becomes a way of life, eventually, you pay the tax with your soul.

Another brick in the wall

Sure, it's tough to fight your own skepticism when you witness how ugly the world can be, day after day. Now imagine growing up in a place that most people see as ugly: Newark, N.J. Its inhabitants are mostly poor and have been plagued by terrible crime rates for decades. But when you watch Sundance's "Brick City," a five-part miniseries that airs every night this week (10 p.m. Monday, Sept. 21, through Friday, Sept. 25) (and you'd better watch it), you get a different view. Once you get past the fact that you're hearing the same old glowing promises out of Mayor Cory Booker that you've heard from every politician under the sun, once you get past the inherent hopelessness of a former Bloods gang member named Jayda trying to kick the gang life, once you look beyond the same old shots of beleaguered cops and overwhelmed high school teachers and tearful community activists, mourning innocent kids gunned down in the streets, there's something beautiful at the core of this series.

It takes a while to let your cynicism slough off, partially because watching a real-life version of HBO's "The Wire" is a little too brutal to take to heart at first, because you've been trained, by that show and by the local news, to avert your eyes from such a gut-wrenchingly dim scenario. Booker, who comes across as charming and slightly nerdy, is still determined to reduce crime in the city of Newark drastically. He wants to make the streets safe for the children of Newark, and keep more of them in school for longer. Can you feel the deep sighs coming already?

While the access that filmmakers Marc Levin and Mark Benjamin, along with producer Forest Whitaker, managed to get to intimate conversations and backroom meetings is truly impressive, it's not always easy to craft a narrative around an endless flow of dismal planning sessions, homicides, press conferences and the latest fight between Jayda and her boyfriend (a member of the Crips). During the first hour or so, it's tough to see how this story will ever take shape.

And that's not to mention the desperation of this picture: Of course the city is broke. Of course Police Director Garry McCarthy is faced with trying to do more with less, but still has to alternately rally and bully his troops in scenes that could've come straight from David Simon's keyboard. Of course Booker is running on fumes and idealism, repeating his own mantras over and over, trying to get all of the beleaguered city officials and community organizers and cops to catch the spirit. Even when the mayor is full of inspiration and a burning desire to fix his city, most of his city officials look like they could use a stiff drink.

But by the third episode -- and I would beg you to stick with this series until then -- something beautiful starts to reveal itself. Suddenly, we stop seeing Jayda as just another former gang member, or Booker as just another politician, or Ras Baraka, the principal of Central High School in Newark, as just another disappointed school administrator. Suddenly we can see straight through to the hearts and souls of these people. Maybe it just takes two and a half hours of this very patient, day-in-the-life documentary to recognize how special the people on-screen are, or maybe it takes that long for its subjects to forget that the cameras are on, or maybe it just takes a while to appreciate how good filmmakers Levin and Benjamin are at ferreting out salient moments so that we really get to know these subjects.

After some dark moments in the first few hours, Jayda starts to really come alive for the camera. She's obviously smart and dynamic from the beginning, but her ability to connect with younger women only becomes clear when she starts a mentoring group for at-risk high-school-age girls called Nine Strong Women. During a sleepover for the girls at her apartment, Jayda warns them against falling in with the wrong crowd, telling them, "Be careful about who you call a friend." One of the girls is annoyed that Jayda is looking straight at her when she says that.

"You want to know why I look at you? Because you have a beautiful heart and you are gullible as hell. You will believe anything. And that is the worst type of person to be in 2008 living in Newark, New Jersey."

Meanwhile, Jayda's boyfriend Creep, who still hangs out with his fellow Cripps gang members, says he doesn't want to be living in Newark at all. When the two of them go looking for a new apartment to share with their baby, plus Creep's daughter and Jayda's young son, Creep spells it out for Jayda.

Jayda: In a neutral zone.

Creep: ... in the business hood, where I go outside and it's like "How you doing this morning, sir? How you doing?" Fucking suits. That's where I wanna live at.

Jayda: Where in Newark could we find that?

So why not just move to a prettier place? Sure, some can't afford it. But crucially, a lot of the people we see on-screen aren't merely interested in making their own lives prettier (like so many of us). They're interested in somehow, some way, pulling their community out of a deep, dark pit of despair.

Baraka and Vice Principal Todd Warren aim to teach their kids lessons that many of them aren't learning at home. In one heartbreaking scene, Warren addresses a group of freshman boys taking part in the Freshman Boys Overnight, a program at Central High that seems to encourage the boys to make the school a sort of second home.

"You're playing around in the classroom, but those kids in [predominantly white] Millburn have their faces in a book," Warren says, but no one looks all that convinced. "But you're too foolish to see that! We're telling you this stuff because we love you, man."

Warren looks around the room and his voice softens. "Some of you don't know anything about real love, though. You've never had any type of interaction with a real man before. Who here is being raised by a woman?" Almost every single kid in the classroom raises his hand.

Boys may always grow up without fathers and Newark may always be a tough place, but this city's heroes give us all something to aspire to. As most of us struggle mightily to improve our own lives, these people fight every day to make the world a safer and better place for their neighbors. In revealing their trials and toils, Sundance's "Brick City" makes our luxuries, from our comforting things to the comfort of our cynicism, look downright foolish by comparison. By resisting the urge to avert our eyes, we can glimpse the blinding beauty that lies in the humblest acts of optimism, generosity and hope.