The Emmys are a rerun! 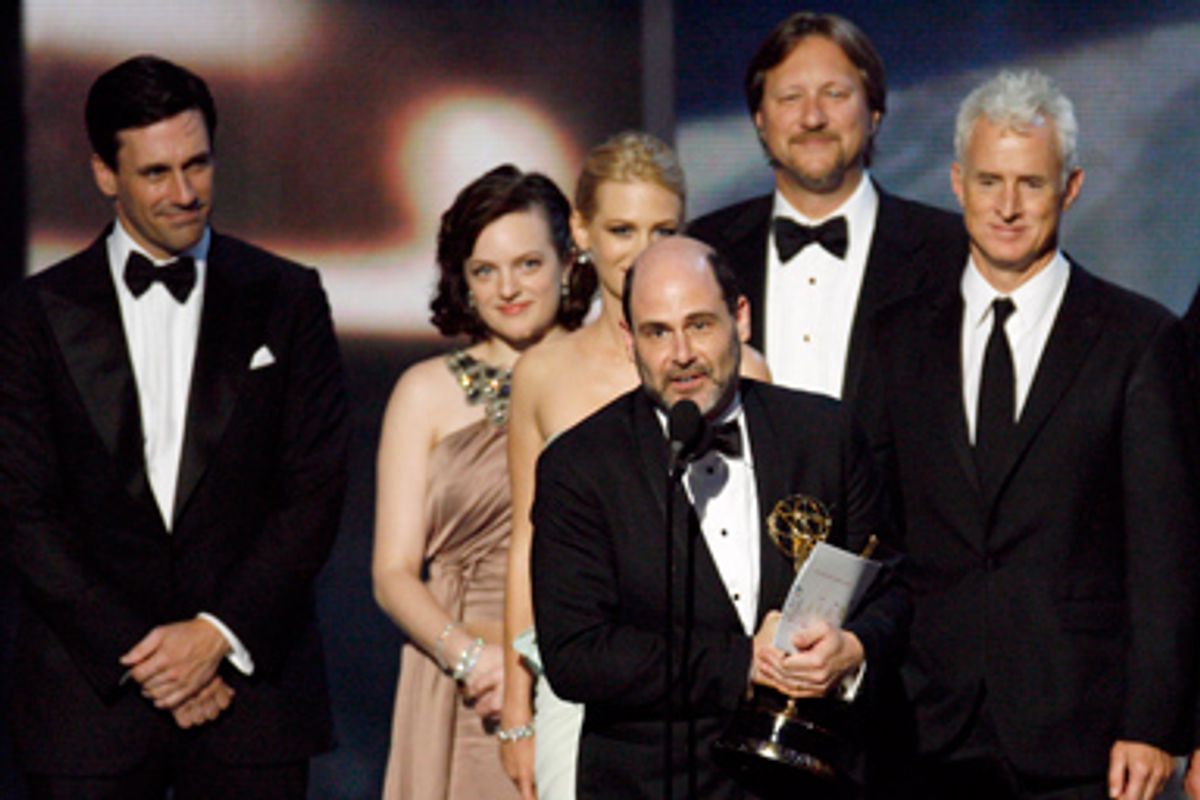 During Sunday night's 61st Emmy Awards broadcast, the only thing lambasted more than Kanye West was television itself.

But Lady Emmy shouldn't be so down on TV! After all, millions of people at home were watching TV on Sunday night -- namely, they were watching the no-time-remaining, game-winning field goal at the end of the Cowboys-Giants game. (The Giants won.) Oh yeah, and millions tuned in to watch AMC's "Mad Men," too.

I would've been watching "Mad Men," in fact, had I not been asked to cover the Emmys. Apparently something really shocking happened on "Mad Men," and I missed it.

But if you were watching the Cowboys-Giants game or "Mad Men" instead of the Emmys? Don't worry, you didn't miss anything -- nothing that you can't catch up with on Twitter or YouTube, that is. (Oh no! Now I'm doing it, too!)

Oh yeah, he did that last year, too.

Hold on a second! This year's Emmys are last year's Emmys! It was all just a rerun! I guess this is the ultimate proof that television is just as irrelevant as everyone on the Emmy Awards says it is.

Still, you have to give them props for daring to throw up a rerun in place of a new, live awards show. That's groundbreaking enough to set the new media world on fire, isn't it? And that was pretty cool how they digitally patched in footage of Neil Patrick Harris over the many-headed hydra of reality hosts that turned last year's broadcast into such a train wreck. Harris was earnest, he sang and danced nicely, he made a quip about Jon Hamm's sexiness, he did a nice bit as Dr. Horrible. He even had a few awkward, not-funny-at-all moments, so that we'd know this was really the Emmys. (Isn't it amazing, how they got all that footage from old "Doogie Howser, M.D." and "How I Met Your Mother" clips?)

OK, fine, there were a few unexpected moments. Toni Collette won a very deserved Best Actress in a Comedy Series for her role on "United States of Tara." Kristin Chenoweth won for her role on "Pushing Daisies." It's highly unusual for someone from a show that's been canceled to win.

Even if it isn't, honestly, why stick around to see the golden statuettes handed out, when names like Alec Baldwin, Glenn Close and Jessica Lange are in the mix? What, Glenn Close is going to lose? Get real, people.

At least we could count on Ricky Gervais to make it funny for half a second: "This is the greatest awards ceremony in the world, no doubt about that," Gervais announced. "The thing about the Oscars and the Golden Globes, they've got film stars there, with their jaw lines and chiseled looks, making me feel bad. But in this room, I'm probably above average." The crowd in the theater actually looked a little bit hurt by these remarks. Gervais says some other funny stuff, too, but I'd advise you to just watch it on YouTube, because it's not reproducible here -- his comic timing is just too good.

There I go, undercutting my own value again, just like Lady Emmy undercuts the value of television. But television isn't really a big, endlessly repeating rerun. That's just the Emmy Awards.