Ardor in the court, Part 3 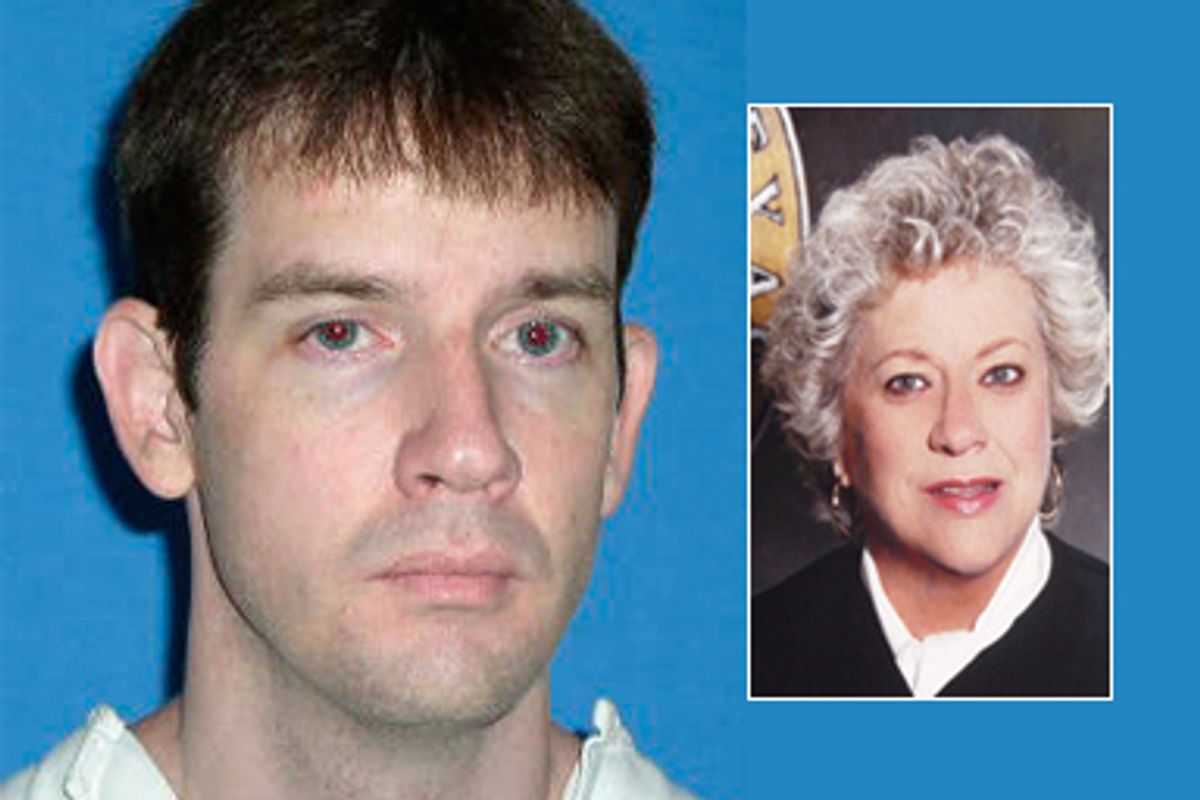 If anyone had any doubt that the Texas justice system operates in a parallel universe, look no further than the latest decision by the state's highest court in the case of death-row inmate Charles Dean Hood. On Wednesday the Court of Criminal Appeals (CCA) said it wasn't interested in examining whether there was a conflict of interest in Hood's 1990 trial simply because District Attorney Thomas S. O'Connell Jr., Hood's prosecutor, had had a long-term sexual relationship with presiding Judge Verla Sue Holland, an affair the two tried to hide for 20 years.

In 1989, Hood was convicted of murdering Ronald Williamson and Tracie Lynn Wallace. The Holland-O'Connell affair was first reported by Salon in 2005, quoting anonymous sources. Judge Holland refused to either confirm or deny the affair at the time. A year ago this month, Holland and D.A. O'Connell, both since retired, acknowledged under oath that they had had a long-term sexual relationship, which was never revealed during more than a decade of appeals by Hood's lawyers. In her defense, Judge Holland said the affair ended more than two years before Hood's trial. But O'Connell also testified that the two had discussed marriage, and recalled that the affair continued as late as mid-1989 -- just before Hood's trial. He said the two continued to have a "good relationship," sans sex, during and after the trial. He said the two took a trip together in 1991.

Rather than address the affair directly, the CCA ruled 6-3 on a technical question, concluding that Hood should have raised the issue at his original trial. But Hood's lawyers couldn't prove the widespread rumors of the affair before Hood's trial. The CCA had earlier criticized Hood for failing to present any "personal knowledge" of the affair, a virtually impossible hurdle given that, as far as we know, there were no witnesses to the lovemaking other than the two principals, no Paris Hilton-style video, and the judge and her boyfriend weren't talking. The CCA also said Hood's claims were based on "rumor," not fact. But when Hood's lawyers were able to present the detailed facts of the affair, based on the confessions of the principals, the CCA said it was not interested in these facts.

Needless to say, some people have found the behavior of the since-retired judge and prosecutor, and that of the CCA, since Judge Holland was once a member of the very panel weighing her actions, more than a little unsavory. A score of legal ethicists concluded that the participation of the two at Hood's trial was unethical, unprofessional and unconstitutional, and the legal basis for a new trial self-evident. Hood's lawyers insist the affair rendered the conviction and death sentence invalid. Now they will have to convince a federal court that Hood has a right to a new trial.

Andrea Keilen, executive director of the Texas Defender Service, which represents Hood, said, "No one would want to be prosecuted for a parking violation -- let alone for capital murder -- by a district attorney who is sleeping with the judge. Yet the Court of Criminal Appeals is unmoved. We are outraged by this breakdown in the integrity of the justice system." John Rolater, an assistant district attorney for Collin County, which is pursuing the case against Hood, called the CCA ruling "a significant procedural victory."

Given the failure of a majority of the CCA to see any conflict of interest in the Hood case, it should come as no surprise that not one of the court's justices saw fit to recuse him- or herself from hearing arguments about Hood, despite the fact that eight of the nine justices had served with Judge Holland. Holland served on the CCA for nearly four years after leaving the district court where she presided over Hood's death sentence. Hood's lawyers presented evidence suggesting that some of the justices might have been aware of the affair.

In addition, the CCA's presiding judge, Sharon Keller, who has described herself as a "prosecution-oriented person," was tried in August before the State Commission on Judicial Conduct on five counts of judicial misconduct, including violations of due process in another death case in 2007. Advised by her staff that lawyers for death-row inmate Michael Richard -- scheduled to be executed that night -- needed an extra 15 minutes to file a final appeal, Keller had replied, "We close at 5." Richard was executed that night without having his appeal heard by the CCA. The outcome of Keller's misconduct proceeding should be announced soon.

Sadly, the conflicts of interest in the Hood case don't end with Judge Holland, D.A. O'Connell and the CCA. Before the Hood case reached the CCA, the case was briefly assigned to District Judge Robert T. Dry who presided over Judge Holland's divorce, and was a defendant with Holland's former husband in a million-dollar lawsuit. Dry issued several rulings unfavorable to Hood, including one that infamously scheduled a hearing for two days after Hood was set to die. Dry recused himself the day after I inquired whether his relationship with the Hollands created a conflict of interest.

The state's ongoing effort to see that Hood is executed is spearheaded by Collin County District Attorney John Roach, who succeeded O'Connell. Roach and Holland both crossed party lines in 1982 to urge voters to reelect O'Connell, a Democrat. Roach and Holland had overlapping terms as Collin County judges for 15 years, and for most of that time O'Connell was the county D.A. Roach told the CCA that Hood's lawyers had been gaming the system to delay the execution, and that they "possessed a more than adequate factual basis upon which to raise his claim" about the affair long before Holland and O'Connell came clean. Among the evidence Roach cited were a series of motions and letters Hood filed -- without a lawyer -- which Roach acknowledged were based on nothing more than rumors, and various news reports about the alleged affair that quoted anonymous sources.

But if Hood had a "factual basis" to raise the claim, why didn't Roach -- who had access to the same information and an obligation to find the truth and not just win a conviction -- use those facts to investigate whether the conviction of Hood obtained by his predecessor as D.A. had been compromised, and whether other attorneys in his office had knowledge of the affair?

He might start by asking his Assistant D.A. John Schomburger, who was O'Connell's co-counsel at Hood's trial,  and who now heads Roach's felony trial division and continues to be actively involved in efforts to execute Hood. Given his decades-long association with the judge and former D.A., it is not entirely surprising that Roach opposed efforts by Hood's attorneys to ascertain whether rumors of their affair were true. Hood's lawyers asked that Roach be disqualified from any further participation in the case. Naturally, that motion was denied by the CCA.

Roach had several reasons for preventing the truth about the affair from coming out. In addition to his friendship with O'Connell and Holland, Roach no doubt realizes that a ruling that the relationship deprived Hood of a fair trial could mean that scores of cases O'Connell brought before Judge Holland were also tainted and could be reversed.

In 2008, Roach was named the state's top prosecutor by the Texas District and County Attorneys Association. Accepting the award, Roach said: "Recognition by my fellow Texas prosecutors as Lone Star Prosecutor of the Year is a great honor -- and doubly so because of our shared dedication to truth, justice and the rule of law."

Like many D.A.'s, Roach has campaigned on his office's high conviction rates, taking special note of murder convictions. Similarly, Judge Holland undoubtedly knew that winning convictions and death sentences in Texas was a career booster for her good friend O'Connell. Even if Holland were able to treat both parties fairly in every case she heard, the courts have ruled that the appearance of such bias is enough to compromise a judge. In the Hood case, Holland was obliged to recuse herself with or without a request from the defense. But she didn't. Certainly, no defendant in his right mind would have elected to have a case tried by this pair of sometime lovers.

Roach's resistance to any investigation of the affair brought Hood within minutes of execution on June 17, 2008, with Roach rejecting a 30-day postponement so Hood's lawyers could investigate the affair rumors. Hood, who had eaten his "last meal," was spared when his execution warrant expired. The execution was rescheduled for Sept. 10. Roach next rejected an appeal from Texas Attorney General Greg Abbott, who filed a highly unusual friend of the court brief on the defendant's behalf, asking the court to investigate the affair allegations, even if it meant delaying the execution. In a personal letter to Roach, Abbott argued that, "if the execution proceeds as scheduled, before questions about the fairness of his trial are legally resolved, neither the victims nor justice will be served."

Hood would almost certainly be dead had it not been for two people: Matthew Goeller, a former assistant district attorney under O'Connell, signed an affidavit in June 2008, stating that it was "common knowledge in the district Attorney's Office, and the Collin County Bar, in general," that O'Connell and Holland had a "romantic relationship." Taking note of this affidavit, District Court Judge Greg Brewer ruled in a highly unusual civil action that the failure of Hood's lawyers to develop hard facts about the affair was "squarely attributable to Judge Holland and Mr. O'Connell's deception and non-disclosure, rather than the lack of reasonable diligence on Hood's part."

Judge Brewer said that Holland and O'Connell failed in their "duty to disclose the fundamental conflict caused by their relationship," and that, "State officials prevented him [Hood] from obtaining concrete evidence of the Holland-O'Connell affair." Three of the CCA judges agreed with Brewer's analysis, concluding that the unsuccessful efforts of Hood's lawyers to obtain concrete evidence of the affair were due entirely to "the principal's longstanding efforts to keep the affair hidden." But they were outnumbered by the six members of the panel who decided to endorse the state's questionable prosecution of Charles Dean Hood, and write another episode in the lamentable saga of Texas justice.