Does Iran want to be a pariah?

As Ahmadinejad heads for the U.S., he and Iran's other hard-liners seem bent on increasing their nation's isolation 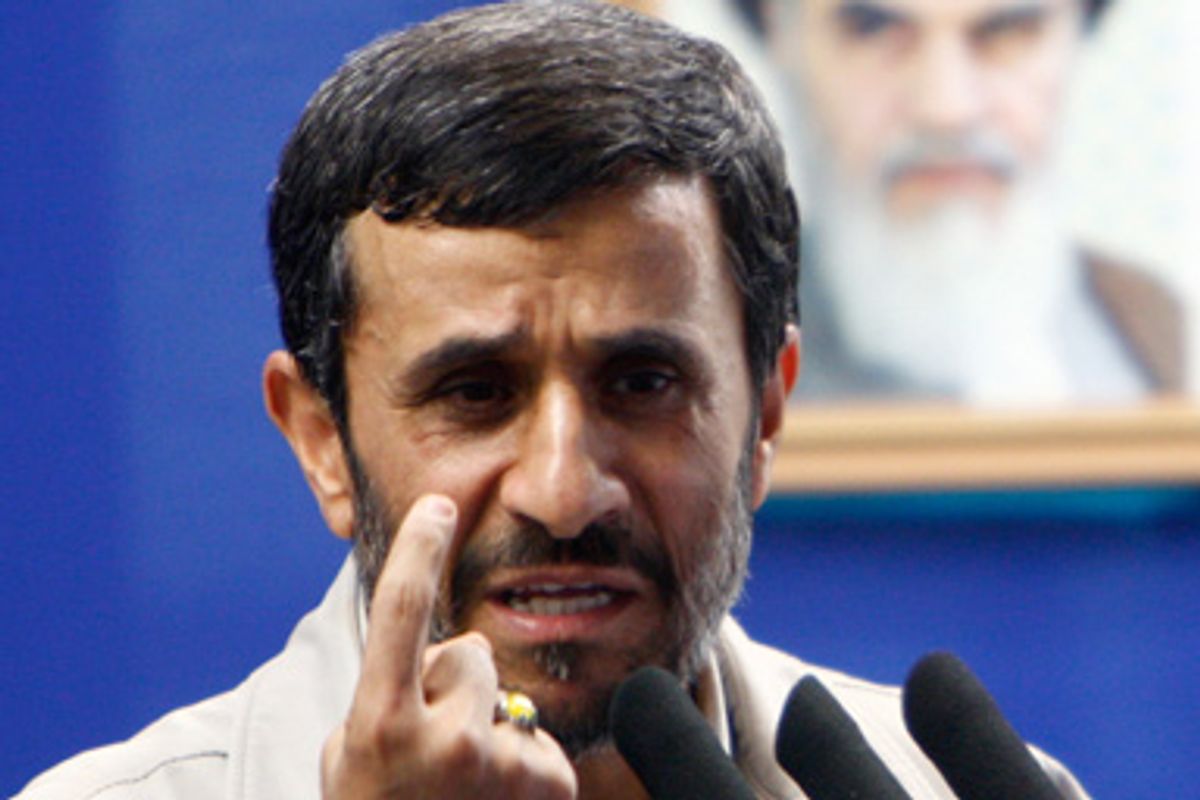 Iran's hard-liners are pushing their country into a dangerous and perhaps crippling isolation that could, if Tehran continues on this path, eventually make it another North Korea. Having damaged their legitimacy at home with a stolen election, which is still being actively protested in the streets months later, Supreme Leader Ali Khamenei and President Mahmoud Ahmadinejad are thumbing their noses at the international community. The regime is adamant that it will make no concessions in regard to its nuclear research program, even in the face of a threat of increased United Nations sanctions. And Ahmadinejad, on the cusp of his trip to New York this week to speak to the U.N. General Assembly, has veered even deeper into a David Duke-like rhetoric about the Holocaust and the role of Jews in history.

Iran's inflation rate is still over 20 percent. Oil prices have been down this year. Unemployment and underemployment are alleged by regime critics to be massive. The country lacks refining capacity and imports 40 percent of its gasoline, producing occasional rationing. Oil and gas majors such as Royal Dutch Shell and Total S.A. have been scared off from developing Iran's enormous natural gas fields by the threat of U.S. sanctions. The country has been rocked by massive demonstrations by protesters who insist that the June presidential elections were stolen. On Friday, thousands of protesters came into the streets of the capital and of other cities for yet more anti-Ahmadinejad rallies. Although a recent poll suggests that the president has the support of some 60 percent of Iranians, the poll was conducted from abroad by telephone and likely its results were skewed by fear of reprisals on the part of respondents.

Abroad, the president made himself an international laughingstock with his questioning of the full extent of the Holocaust and his expressed conviction that the "Zionist state" in Israel will collapse (widely misinterpreted in the West as a threat to "wipe Israel off the map"). There is increasingly severe talk by Secretary of State Hillary Clinton and German Chancellor Angela Merkel of ratcheting up sanctions, over Iran's insufficient cooperation with the International Atomic Energy Agency, especially with regard to its missile development programs.

Given its economic woes and the box in which the international community has placed its development prospects, you would think the Iranian government would be eager for the direct talks with the United States that are being proffered for the first time in years by the Obama administration, and would go into them trying to make a good impression. Instead, Ahmadinejad gave a major speech on Friday, Jerusalem Day, an annual event devoted to Palestinian solidarity, in which he ventured still deeper into Holocaust denial and further harmed his government's credibility. He called the Holocaust, which he characterized as a mere pretext for Zionist expropriation of Palestine and expulsion of the Palestinians, a "lie" and a "fable."

In preparation for renewed direct talks with the five permanent members of the U.N. Security Council plus Germany, Iran had released in September a non-document that did not so much as even mention the main point of contention, its nuclear research program. In an interview with NBC News on Thursday, Ahmadinejad replied to a question about whether Iran was prepared to be flexible on its nuclear program, saying, "If you are talking about the enrichment of uranium for peaceful purposes, this will never be closed down here in Iran."

Iran has the right under the Nuclear Nonproliferation Treaty to learn how to produce enriched uranium to fuel the reactors it is building. But the centrifuges it is using are an open-ended technology, such that if a nation can learn to use them to enrich uranium to 22 percent (enough for reactor fuel), there is no absolute bar to its learning to enrich to the 95 percent required for a nuclear bomb. Iran can therefore only allay suspicions that it actually wants a bomb by allowing thorough (and even surprise) U.N. inspections and by granting greater access to its scientists, engineers and equipment. Iran was caught doing undeclared weapons-related research in 2002, which is forbidden in the NPT, so it is on a kind of probation from the point of view of the West.

None of this Iranian performance could have been comforting to the UNSC members and Germany. The United States rejected the Iranian proposal concerning the resumption of talks. Perhaps alarmed at the way Ahmadinejad had introduced new uncertainties concerning Iran's nuclear ambitions at an awkward time, Supreme Leader Khamenei underscored in his sermon for the holy day, Eid al-Fitr, on Sunday, that Iran will never countenance, possess or deploy nuclear weapons because they directly contradict Islamic ideology (which forbids killing innocents in war).

Iran may be counting on Russia and China to come to its aid. Khamenei and Ahmadinejad would be foolish to make that bet. Although Russia's prime minister (and de facto leader), Vladimir Putin, recently spoke out against further sanctions on Iran, President Dmitry Medvedev indicated in a CNN interview on Sunday that Russia's patience is not infinite. He said, "Iran must cooperate with the IAEA [International Atomic Energy Agency], this is an absolutely indubitable thing, if it wishes to develop its nuclear dimension, nuclear energy program." It is possible that Russia will be more flexible on the Iran sanctions issue now that President Obama has canceled plans to build missile shield facilities in Poland and a radar station in the Czech Republic, plans to which Moscow had vehemently objected. Likewise, Obama is seeking to blunt Iran's propaganda campaign concerning the nukes of the great powers by pushing for further nuclear disarmament in the U.S. and Russia.

Further unilateral U.S. sanctions and collective UNSC measures should be taken more seriously than they are by Iran. Ahmadinejad defiantly told NBC, "We think for one or two countries to think that they own the world and they are the ones that make the major global decisions and others should follow -- that period has come to an end." But Iraq's economy was ruined by U.S. and U.N. sanctions in the 1990s, and the lack for some period of time of chlorine for water purification and of some medicines is thought to have been responsible for the deaths of 500,000 Iraqi children. Targeted sanctions on North Korea interdict military and technological equipment, exclude luxury goods, and constrain the country's finance system. This summer, the UNSC went further and urged member nations actually to board suspect North Korean ships. China, which had earlier blocked such moves, agreed to this resolution because its leaders were furious about North Korea's underground nuclear test. The Khamenei-Ahmadinejad regime risks making Iran a pariah on the North Korea model if it goes on defying the international community. Iran's people will be the real losers if that happens.