Michael Moore and the evils of free enterprise

In "Capitalism: A Love Story," the filmmaker takes to the bullhorn to decry corporate greed -- and promote himself 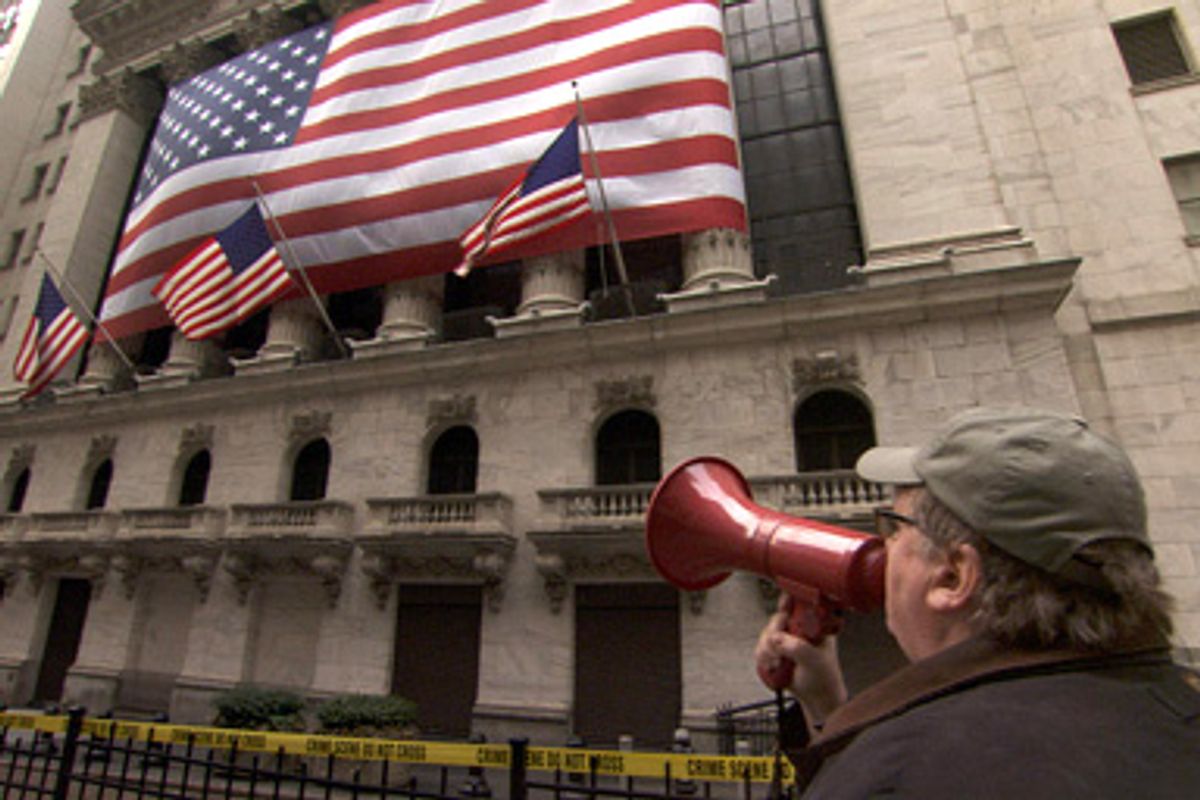 Michael Moore's ostensible subject has always been his fury at the injustices wrought against hardworking American citizens. And it's possible that, in his early days as a filmmaker, that was his true motivation. But 20 years after "Roger & Me," "Capitalism: A Love Story" proves that Michael Moore's greatest subject is himself. This is a love story, all right, but it has less to do with the flaws of capitalism than it does with Moore's unwavering fondness for the sound of his own voice, and for what he perceives as his own vast cleverness.

As with all Michael Moore's films, that's not to say he doesn't have a point, buried in there somewhere amid all the Silly Putty-stretched facts and cartoony music. It's possible to agree with Moore in theory and still find his tactics sloppy and ineffective (though his zombie-like followers don't like to allow for the existence of any potential gray areas, maybe because gray areas tend to demand actual thought). In the 2007 "Sicko," he highlighted some very real, and very dangerous, problems with the U.S. healthcare system. In the 2004 "Fahrenheit 9/11," he asserted that our then-president was bad for America, and that the Iraq war was wrong. If you're reading this right now, it's 99 percent likely that you agree, as I do, with Moore's basic take on those subjects.

The problem with Moore's approach is that he reveals these injustices as if he's just discovered them himself. Similarly, "Capitalism: A Love Story" will be revelatory and helpful to those Rip Van Winkles who slept through the fall of 2008 and the early part of 2009, who didn't realize that hardworking American people are being pushed out of their homes in record numbers as a direct result of corporate greed. It's not Moore's core beliefs that are grating: It's his consistently wide-eyed approach, his presupposition that you need to adopt an aura of innocence in order to be outraged. In Michael Moore's world, to be enlightened and outraged makes you one of the elite -- better to be an underinformed Everyman, so he can spoon-feed the facts to you and therefore reinforce his own reason for existing.

Moore's aim here is to prove that capitalism, at least as big business currently defines it, is bad. It wasn't always thus: Moore includes footage from his own family's home movies, showing a smiling young Mike enjoying the pleasures of life in Flint, Mich., circa the 1950s. (Moore's father, who appears in the film, was a longtime G.M. employee.) Moore explains in voice-over that his family wasn't rich by any means, but they were definitely comfortable: The house in which he grew up had been fully paid for by the time he was in kindergarten; his parents could buy a new car every three years. This is Moore's way of explaining -- and he's not wrong -- that many working people could take part in the capitalism of the '50s, but capitalism as it's practiced today is another story.

In his usual hopscotching fashion, Moore goes on to explore numerous instances of corporate greed and its effects on working people: He interviews several young pilots, working for regional airlines, who are trained and entrusted to operate aircraft and yet who barely make enough money to get by. (One of them explains that he had to go on food stamps.) He interviews Peter Zalewski, a scarily slick type who works for a Florida real-estate concern called, in a stroke of brazen forthrightness, "Condo Vultures," which specializes in matching foreclosed properties with buyers, who resell them for a profit. He decries last fall's banking-industry bailout, and bemoans the way the recipients squandered the money they received instead of using it to either save endangered jobs or create new ones.

But Moore doesn't shed any new light on this kind of greed, and his attempts to grab his audience are so strained that they detract from his essential argument. His tactics here include conducting on-camera interviews with families who have just been pushed out of their homes. For understandable reasons, these people are often brought to tears as they vent their outrage and sadness, their sense of loss. In case we're not getting the point, Moore puts gloppy, sentimental string music on the soundtrack, as if he believes viewers can't be trusted to grasp the basic horror of the situation on their own. At another point, he marches up to AIG headquarters on Wall Street (it appears to be on a Sunday morning, when no one's around -- Wall Street is bustling on any weekday), declaring to the security guards that he's there to make a citizen's arrest of the CEO. The security guards rebuff Moore firmly but politely, as if he were a crazy but harmless old auntie -- they'd serve Moore's purposes better if they were angry or bullying.

Moore does hit a number of crucial points, making note, for example, of the large number of former Goldman Sachs executives who figure prominently in both the current and previous administrations. But he can't let 10 minutes pass without injecting himself into the conversation: Moore can't mention the sad collapse of Detroit without taking credit for foreseeing these kinds of problems in "Roger & Me," as if he'd offered some kind of viable advice that simply hadn't been taken. He tells us how, when he was a lad, his dream was to enter the priesthood, because he so admired the work of Catholic priests who became involved in the fight for civil rights. This is his way of reminding us how noble his goals are -- that all he ever really wanted to do was fight for the little people.

But his respect for the priesthood does make sense in terms of his misguided sense of pageantry. In "Capitalism: A Love Story," he can't resist showing himself outside the hallowed halls of Citibank (and Chase, and AIG), trying to gain access and, of course, being refused. Those scenes have become tired staples of every Moore film, a recycled vaudeville act that's supposed to be funny, surprising or outrageous each time we see it. Scenes like that are necessary to reinforce Moore's status as an outsider, and his loyal fans, it seems, never get tired of seeing them. At this point, Moore appears to be making movies specifically for those fans -- he's no longer even pretending to try to win over the general populace. With "Capitalism: A Love Story," he's preaching to people who have already been converted, 20 times over. As for the others, no matter how loudly he shouts through his bullhorn, he's not going to get their attention.