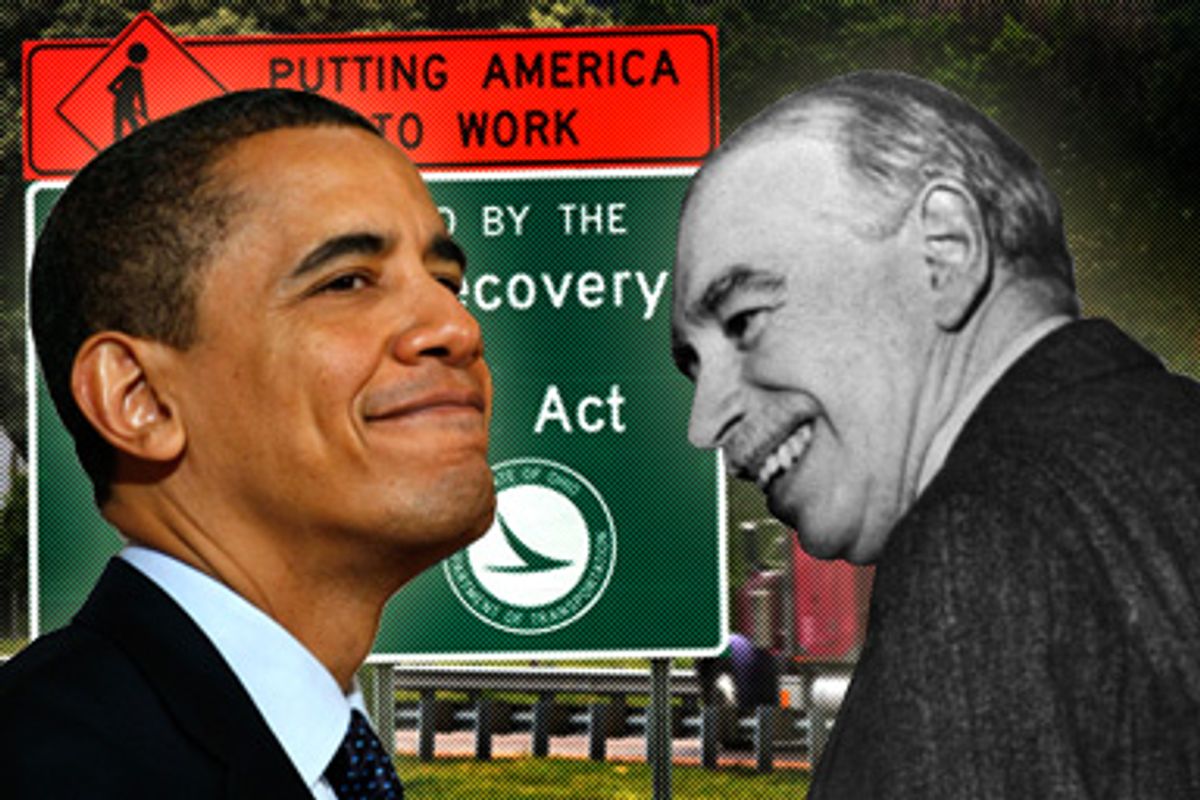 President Barack Obama and John Maynard Keynes. Background: An Ohio Department of Transportation sign near the Interstate 490 and Interstate 77 ramps in Cleveland, on June 8, 2009.
--

The sudden present-day prominence of John Maynard Keynes, an economist who passed away 60 years ago and whose theories have been mercilessly ridiculed by conservatives for at least three decades, calls to mind the famous 1981 Rolling Stone magazine cover story on the Doors' Jim Morrison: "He's Hot, He's Sexy, and He's Dead."

We've witnessed quite the turnaround. From at least the 1970s on, Keynes' star was in eclipse, while Milton Friedman and the free market theorists of the Chicago School of Economics seized the commanding heights of economic discourse. To even mention Keynes was to be dismissed as hopelessly out of touch with state-of-the-art theory. Hadn't you heard? The government governs best when it governs least!

And yet today, you can't click your way three links through the econoblogosphere without stumbling into a flame war between reenergized triumphalist Keynesian supporters of government intervention in the economy and bewildered, angry market fundamentalists who have just watched their painstakingly constructed world crumble around them. Just a few years ago the heat of the debate would have been unthinkable -- Keynes seemed to have about as much relevance to current economic policymaking as Winston Churchill does for the Middle East peace process.

But global economic crises that obliterate the notion that markets are intrinsically self-correcting and efficient have a way of shaking things up. As the University of Chicago's Robert Lucas (who most explicitly does not fall in the pro-Keynes camp) said last October, "Well I guess everyone is a Keynesian in a foxhole ..." Meaning, basically: When shit happens, people want help. And since Keynes is the most illustrious proponent of the idea that government should help get economies back on track when they ride off the rails, his reputation is on the serious upswing.

Few people are better situated to comment or explain Keynes' current fashionableness than Lord Robert Skidelsky, author of the newly published "Keynes: The Return of the Master"

-- which comes complete with the possibly overdone sub-headline: "Why, Sixty Years After His Death, John Maynard Keynes is the Most Important Economic Thinker for America."

Skidelsky has devoted the bulk of his creative life to Keynes. He spent decades producing a three-volume biography of the economist that won numerous awards and has already been abridged once -- into a merely 1,000-page tome! The new book, clocking in at a slender 220 pages (including notes), is thus a distillation of a distillation, shoehorned onto the recent economic crisis. Ironically for an author who spent so many years laboring over his definitive account, "The Return of the Master" feels a bit hasty, written as if with one eye focused on the headlines and Paul Krugman's latest blog post.

But that's OK. There is nothing awkward or opportunistic about speedily resurrecting Keynes in the wake of Wall Street's implosion -- it is, on the contrary, entirely appropriate. Keynes would not be surprised at the mess we are in today. While so many leading economists failed to predict or even conceive of the possibility of market failure on such an enormous scale, Keynes wouldn't have blinked an eye. One of his fundamental propositions was that the future was inherently unknowable, that we live in a constant state of "irreducible uncertainty." Shocks, depressions and recessions are bound to happen. The question is: What to do about them?

Anyone who followed the shouting earlier this year over the pros and cons of the Obama stimulus is familiar with the basic contours of that debate. Republicans, taking their cues from conservative economists, argued that the economy would recover on its own, and that government spending now would be equivalent to robbing the future, "crowding out" private investment, guaranteeing huge deficits and, eventually, crippling inflation. Democrats, taking their cues from Keynes, argued that we were trapped in a vicious cycle catalyzed by what the great economist called the "paradox of thrift." Individuals, worried about the future, abruptly began to save instead of spend, creating a "demand shock" that forced businesses to cut production and lay off workers, which further dampened consumer demand and caused the spiral of doom to accelerate. If government hadn't stepped in to break that cycle -- by unilaterally creating demand to jump-start the economy -- we would have run the risk of letting a recession metastasize into a depression.

When shocks to the system occur, agents do not know what will happen next. In the face of this uncertainty, they do not readjust their spending; instead, they refrain from spending until the mists clear, sending the economy into a tailspin.

Skidelsky deftly summarizes and explains basic Keynesian economics and how they apply to our current travails. He argues that the main reason we haven't already slipped into a second Great Depression can be attributed to the fact that the world's governments followed Keynes' maxim -- they acted. He also provides a nice capsule explanation of how Keynes was overshadowed by Friedman -- but anyone who has read Paul Krugman's recent New York Times Magazine piece, "How Did Economists Get It So Wrong?" will find the material familiar.

But to focus on the nitty-gritty of how Keynesian economics contradicts Chicago school efficient-market theory or is fulfilled by the Obama stimulus is to miss one of the key points that Skidelsky strives to make. Keynes, whom Skidelsky calls "the wisest and most intelligent economist of the last century," was in some ways a reluctant practitioner of the dismal science. He could just as easily have been a philosopher or a historian -- his interests were wide-ranging, his mind as agile and as easily distracted as a hummingbird. For Keynes, the challenge was not to come up with a comprehensive model of how "the economy" worked, but to ensure that human beings were able to live "wisely, agreeably, and well." The economy was but a means to that end. "To make the world ethically better," writes Skidelsky, "was the only justifiable purpose of economic striving." We fail, morally, when "we worship ... economic growth for its own sake, rather than as a way to achieve the 'good life.'"

To understand Keynes requires a detour into ethics and philosophy and a willingness to ponder such statements as "it cannot be readily assumed that what we desire is desireable." Such discourse, to put it bluntly, is not often found in the policy recommendations of contemporary economists, nor does it fit into their math-heavy models. But for Keynes, it was essential -- he wanted everyone to be able to live "the good life" -- and he did not equate that goal, necessarily, with the accumulation of wealth. If Keynes were alive today, suggests Skidelsky, he would agree with those critics of Wall Street who believe finance plays far too great a role in the economy. He would regard the machinations of hedge fund operators and investment bankers as chaff in a giant casino where all the players are dominated by the crass desire for money rather than by the imperative of living a meaningful life.

To your run-of-the-mill market fundamentalist, questions of ethics are irrelevant. Capitalism works by satisfying consumer needs and wants. Government should stay out of the way. But Keynes is on the comeback trail because our present-day predicament shows this to be manifestly untrue.

Let me give the microphone to Skidelsky. In a paragraph and a half, he asks a set of questions that are at the heart not just of his book, but of our existence on this planet.

Keynes looked forward to a saturation of wants. But he did not see this as a natural, but an ethical terminus. Wants were to be controlled not by the size of the stomach, but by a generally accepted conception of "sufficiency" for the good life.

In terms of arithmetic, he was almost spot on in his predictions of growing wealth, but attitudes have changed less than he expected. Although real incomes in rich countries have doubled in the last thirty years, the populations of these countries work harder than ever and are no happier. This raises the question of why they are still on the growth treadmill. Is it because capitalism needs constantly to expand markets, and ensnare by advertising more and more people into useless consumption? Is it because economists have ignored the fact that, as societies become wealthier, positional goods -- goods which satisfy not our needs, but our longing for status -- become more and more desirable? Is it because globalization has made affluence too insecure and too uneven in its spread for most people in wealthy societies to ease off work? Or is it because we lack any agreed idea of the good life in the name of which we can say "enough is enough"?

If Keynes were alive today, these would be questions he would be asking. And after reading "Keynes: The Return of the Master," one can only conclude that we would be well-served to have him out and about, confounding the status quo with his impertinence.