Airplanes, oxygen and the media

Why do people keep insisting that pilots manipulate the air supply in planes? It ain't true, folks 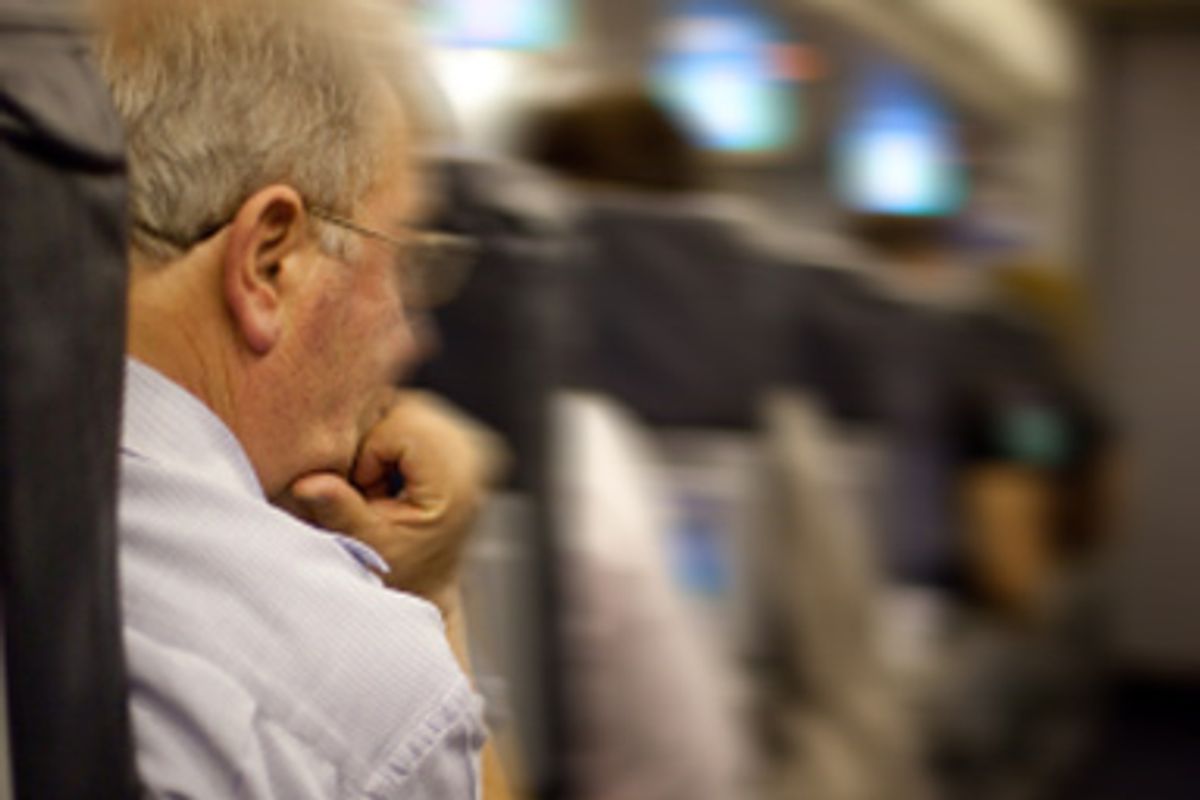 Annoying fallacies about the air quality on commercial planes simply will not go away. And it's especially regrettable when our most august and reliable news sources become part of the problem.

Case in point, the following is from the Sept. 17 issue of the Economist, in a feature titled "Breathing More Easily," about a new high-tech air filter developed by a pair of companies in the U.K.:

"Typically an airline will strike a balance by using a 50:50 mixture of fresh and recirculated cabin air," it says, "although pilots can reduce the amount of fresh air to save fuel. Some are thought to cut it back to only 20%."

My mouth dropped open when I read this.

To start with, pilots cannot tinker with a plane's air-conditioning systems (there are usually two, known as "packs," supplied by each engine or pair of engines) to modify the ratio of fresh to recirculated air. This ratio is predetermined by the manufacturer. It is neither arbitrary nor adjustable from the cockpit.

And I love that sentence, "Some are thought to cut it back to only 20%," with its oily overtones of conspiracy -- an insinuation that is not only a blemish on the magazine's standards, but is offensive to those of us who fly planes for a living.

In reality, here's how it works:

On modern aircraft, the rate and volume of airflow is pretty much automatic. On the Boeings that I fly, we have direct and accurate control over temperature, but only indirect control over flow. If you asked me to please "cut it back to 20 percent," I would politely inform you that this is impossible. The switches are set to automatic mode prior to flight, and the packs more or less take care of themselves. So long as both engines are turning and everything is operating normally, the flow is perfectly adequate. Only when there's a malfunction (an overheat, a recirculation fan failure, or some other glitch in the plumbing) are the settings changed. In over two years of flying 757s and 767s, this is something I have done exactly twice.

On the MD-80 that I previously flew, designed by McDonnell Douglas, we had two pack modes determining airflow: on and off. On is where they stayed. Even with two of them, shutting down a pack completely is a fairly big deal; it is not something done for fuel savings.

I am not as familiar with Airbus models, but let's talk to somebody who is.

"Airbus series aircraft, from the A320 through the much larger A380, do provide a way for pilots to vary airflow," says Dave English, an A320 captain. "But not in the way characterized by the Economist."

English explains that the Airbus controllers have three positions, labeled HI, NORM and LO. "Almost all the time you're in the center NORM position, which is automatic. The HI position is used when you need a rapid change in cabin temperature. The LO position does as the name implies. It provides some fuel savings, but they are minimal and this isn't used very often. Company guidance is to use LO whenever the passenger load is below a hundred. It's not a big change. Sitting in the cabin, it's almost impossible to notice the difference."

An Airbus pilot for United with whom I spoke says that his carrier requests switching to LO if the airplane is less than 60 percent full. He adds, "We rarely ever move the switch out of automatic."

On a related and equally frustrating note, my old nemesis Diana Fairechild is back again. She was quoted last Friday in a CNN.com story about aggressive airline passengers.

Fairechild is the author of "Jet Smarter," a once-upon-a-time bestselling exposé that took the airlines to task over various safety and comfort issues. Fairechild was a flight attendant for many years at United and Pan Am, and in her book and through her Web site she assumes the role of passenger advocate -- a sort of Ralph Nader with a tray of pretzels.

One of Fairechild's regular and fraudulent talking points is the one about a supposed lack of oxygen in the passenger compartments of airliners. "Pilots reduce the fresh air in the passenger cabins," she reports on her Web site, "but not for themselves in the cockpit." And pilots, she says, "receive ten times more oxygen than passengers." What bastards!

Last Friday she was at it again. "There are more delays, fees and less fresh oxygen on board," Fairechild told CNN, "which can trigger angry behavior."

A provocative claim to be sure. The trouble is, it's ridiculous and untrue.

I'm with her on delays, but there is no less oxygen aboard commercial jetliners than there ever has been. Oxygen is determined by pressurization, and planes are not being pressurized any differently than in the past.

Pressurization, for those who don't understand it, is what allows you to breathe normally while flying at high altitudes. Using air bled from the compressor sections of the engines, it effectively squeezes the rarefied, high-altitude air back into sea level air (or something reasonably close to sea level; see below), increasing the density of oxygen. Crews set up the pressurization system (there's a main and a backup) before departure, dialing in the intended cruising altitude and/or elevation of the destination airport. The rest happens automatically. While en route, the cabin is held at the equivalent of anywhere from around 5,000 to 8,000 feet above sea level, depending on the aircraft type and cruising altitude. (Pressurizing all the way to sea level is unnecessary and would put undue stress on the airframe.) In other words, you're breathing as you would in Denver or Mexico City -- minus the pollution.

One of flying's most enduring myths, which people like Fairechild have made very difficult to kill, is the one claiming that pilots tweak pressurization levels as a way to save fuel, and at the same time, subject passengers to an oxygen-scarce environment that keeps them woozy and docile. Not only is this patently false, it would have quite the opposite effect on a plane's occupants. Although the symptoms of hypoxia can, at first, make a person feel giddy and relaxed, they also induce confusion, nausea and migraine-strength headaches (though not the "angry behavior" as Fairechild has it). I remember the multiday hypoxia headache I endured some years ago in Cuzco, Peru, an experience I wouldn't wish on my worst enemy, let alone a planeload of customers. (Do I look tortured in this picture? I am.)

And as I've reminded readers before, pilots are breathing the same air as everybody else on a plane. An aircraft fuselage does not contain separate compartments with different pressure values in each. The entire vessel is pressurized equally from the forward pressure bulkhead to the aft pressure bulkhead. This normally includes the cabin, cockpit and lower-deck cargo holds.

For the record, several of the points emphasized on Fairechild's Web page about cabin air, which you can read here, are grossly inaccurate.

Take, for example, this bogus extrapolation: "A study of office buildings found that the transmission of contagious diseases increases significantly when a large percentage of air is recirculated," she notes. "It seems logical to apply this finding to the airline cabin environment."

Maybe to her it does, but it's wrong. This is a terrible apples and oranges comparison (or, if you rather, peanuts and pretzels). It neglects to account for the hospital-quality HEPA filters used on commercial planes, and it omits the critical fact that there is a total changeover of air, both fresh and recirculated, every few minutes. The air in office buildings and other crowded dwellings is far more stagnant.

My own in-depth discussions on the facts and fiction of cabin air can be read here. And here.

Fairechild's assertions are rubbish, and it's distressing to hear a network as influential as CNN repeating them.

(It strikes me, having laid all of this out there, that I should probably expect a backlash. Don't be surprised if I, and any pilots who might back me up, are strung up in Salon's letters section on allegations of playing shill to the airline industry. This happens almost every time I counter some counterfeit nonsense ordinarily held gospel by conventional wisdom. It's a bit rich, I have to say, the idea of pilots cravenly beholden to the financial overlords of their business, doing the dirty work for those who have cashed in while slashing wages and gutting pensions on the way out -- major airline pilots earn about 30 percent less than they did 10 years ago. If you think pilots are that naively allegiant, or that easily duped, you haven't been around them.)

Anyway, as for more reasonable causes of passenger violence -- air rage, as they call it -- it's interesting that Fairechild would mention oxygen ahead of, say, alcohol. No surprise, a report from London Guildhall University cites alcohol as the chief factor in 88 percent of violent on-board episodes. Of the incidents I have witnessed personally, the number is closer to a 100 percent.

Cramped quarters, airport security lunacy, screaming babies and the other stresses of flying do not bring out the best in people, particularly those predisposed to belligerence in the first place, or who've had a few.

The daily passenger total in the United States is close to 2 million riders, a vast demographic that has, on the whole, become a lot more varied and -- how to say this? -- less buttoned-down than it used to be. All things considered and regardless of the cause, I would argue that air rage is perhaps more notable in its absence than its presence.

Good grief, it's been over a month since we last talked music. Even without an editor's decree, already I've broken my promise to close each column with a discussion about 1980s alt-rock. So here goes:

The other day I was asked by a reader what I thought of the Replacements' song "Waitress in the Sky," from the 1985 album "Tim."

It's OK, is what I think. Snappy and catchy, but nothing special. One interesting point: Listen carefully to the lyrics and you'll notice how the name of Republic Airlines was changed to the nonsense name "Reunion." This was presumably to avoid any libel issues. Somehow Paul Westerberg and the Stinson brothers weren't exactly ideal spokesmen for an airline.

The old Republic Airlines was based in Minneapolis, the Replacements' hometown. The company is today part of Northwest, which itself is about to become part of Delta.

On the whole I was never too impressed by the Replacements' later-career material. I'll say this, though: The band's first album, the irrepressible "Sorry Ma, Forgot to Take Out the Trash," from 1982, is the greatest garage rock album of all time. What band today could ever cut a song like "Raised in the City"?