"Fame": It's not gonna live forever

Why the classic '80s musical won't translate in an era of instant celebrity, YouTube and "American Idol" 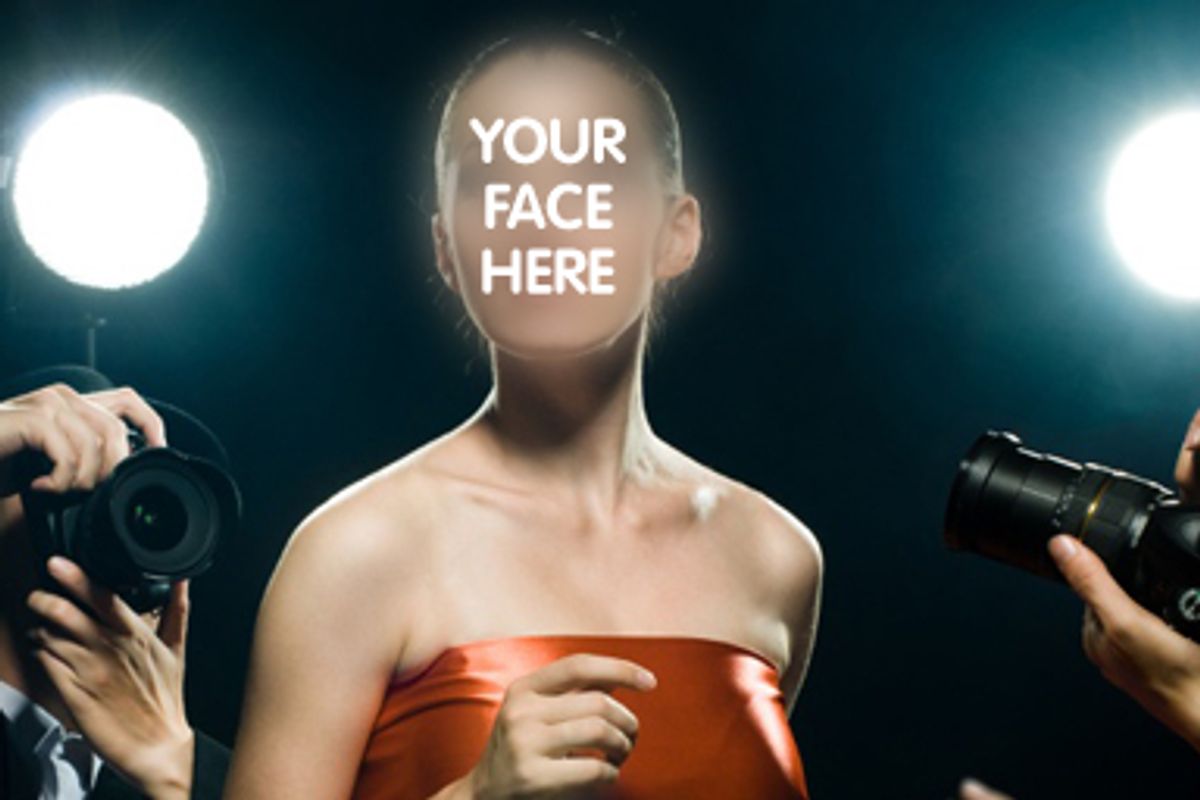 In a scene from the new "Fame," opening Friday, an acting teacher addresses a crop of aspiring adolescents trying out for a coveted slot at the LaGuardia High School of Music and Art and the Performing Arts.

"You wanna be famous?" he asks from the seats of the theater. "Then you gotta earn it."

That may be an acting teacher's party line. But that advice blaringly ignores the reality of today's instant celebrity, when YouTube stars like Chris "Leave Britney Alone!" Crocker and the sixth runner-up on "American Idol" are more likely to enjoy name recognition than a kid who learned how to play the oboe at a performing arts school. "Fame" (which was not screened prior to its release) tips its hat to the way things are, to an extent. In the best line from the trailer, an excessively jazzed student exclaims, "The casting director found me on YouTube!" Not, "The casting director liked the monologue I spent ages rehearsing!" Being good at what you do has never been a lock for any actor hoping to land roles in the laughably competitive world of entertainment. But as Tila Tequila can tell you, being famous in 2009 has precious little to do with talent or hard work.

It's a shift from 1980, the year Alan Parker's film debuted. Back then, Broadway and film musicals like "A Chorus Line," "All That Jazz" and "Stayin' Alive" showed the pursuit of fame as part of the American dream. Having a name worth remembering took hope, compromise and, most of all, backbreaking work. (It also, apparently, took synthesizers.) The success of "Fame" -- and the long-running TV series that followed -- showed just how voraciously American audiences would lap up a story about talented, multicultural youngsters sweating through the demoralization and muscle-cramping agony of hours upon hours of practice in order to "make it." These kids danced because they couldn't not dance, and they lived their lives with the clarity of movie tag lines: They'd never quit until they got their one shot. In the highly quotable opening montage of the TV show, Debbie Allen, as dance teacher Lydia Grant, barks, "Fame costs! And right here is where you start paying. In sweat."

Some may cringe at the sentimentality of striving for that "big break" and paying for anything in the currency of perspiration. And indeed there is something inherently adolescent about the earnestness needed to pursue a career in the performing arts. But I, for one, can relate: As a kid in the early '80s, all I wanted was to play Annie. I went out for production after production of that treacly Charles Strouse musical, hoping that if my belted version of "Maybe" didn't seal the deal, my natural red hair would. After all, who wants to put a wig on a kid without leukemia? I was not alone in my starry-eyed ambitions. Musicals experienced a renaissance in the '80s, an era, not coincidentally, known for narcissism. Little girls begged their parents to buy them leg warmers, to sign them up for tap and jazz, to drive them to auditions in hopes of becoming the Next Big Thing.

Unlike leg warmers, kids wanting to be famous is not a phenomenon exclusive to the early '80s. Kids are born into the world believing they hold its center; wanting a spotlight and a mob's rapt attention is only one extension of me-first juvenilia. But the late '70s and early '80s rolled out a series of musical fantasies that made singing to the rafters seem like the best thing to do while your acne cleared up. The meta-musicals I mentioned earlier joined blockbusters like "Footloose" and "Flashdance" in the popular imagination. But perhaps more than any of those ambition-drenched dance movies, it was "Fame" that normalized the concept of a generation of singers, actors, dancers and musicians old enough to be famous, but too young to drink or vote. It also paved the way for the swarm of competitive reality shows, from "American Idol" to "So You Think You Can Dance," the winner of which is the star of the new "Fame." It turns out, she does think she can dance -- and she's right!

There have been other shifts in our fame culture since 1980, of course. The new film, like the original, features characters who want to dance ballet, compose music and hit a high B-flat, but there's also an aspiring rapper and a teenage producer who sweetens tracks from the comfort of his bedroom on his iMac, with Pro Tools. A more critical shift, however, is that the median age of mainstream stars has plummeted in two decades -- especially for women -- and the expiration date on a young person's acting or singing career is steadily rivaling that of a dancer's or a model's.

Twenty years ago, when adults like Sigourney Weaver and Dustin Hoffman starred in movies, actors often spent their formative years honing their craft. Hoffman trained in Method at the Actors Studio, Weaver got a master of fine arts at the Yale School of Drama, and the careers of LaGuardia alums Robert De Niro, Al Pacino and Ben Vereen, to name a few, speak volumes to how studying the art of acting could pay off. But the sad truth is that, for teenagers craving fame today, it might not make sense to spend what are now the most castable years of their lives tucked away in a classroom. For better or worse, the modern training model might more closely resemble the nightmare territory of "Toddlers and Tiaras"; if you want a kid to know how to execute a perfect arabesque, you'd do best to start teaching her while she's still in diapers. Besides, it's absurd to think of a teenage kid "studying" acting for the sake of being a series regular on "One Tree Hill."

When I was a kid and wanted to be Annie, yearning for fame was a flight of fancy typically limited to the gay kids and theater geeks. But that's not the case anymore. President Obama's message for kids to aspire to be "doctors and teachers, not just ballers and rappers" speaks to what's become the prevailing ambition of kids across the country. A desire for fame -- to be known, to be remembered -- is perhaps part of what compels kids to post anything that crosses their minds to YouTube and Facebook, whether it's brilliant or insipid. Inherent to the attraction of the Internet is the fleeting buzz of being known, even on a micro level. Every teenager wants to be special, and what's more special than being famous?

How odd that, while teenagers regard pretty much everything in the world with sarcasm, the idea of pursuing the dream of "making it" as a singer, actor or dancer is still sacrosanct. Of course, the avenues for fame have exploded since 1980. Instead of schlepping to New York City to audition for Juilliard, a master violinist today might audition in his hometown for "America's Got Talent," hoping to nab the slot between the juggler and the "Stomp"-style bucket drummer. Prime-time TV has become vaudeville for young and old aspirants -- though the emotionally fraught, adolescent-grade sincerity of performers makes them all seem like teenagers. In fact, the essence of reality TV relies on everyone behaving like high schoolers, from the new-moneyed 40-somethings on "Real Housewives," who exclude one another from parties like mean girls, to the contestants on "Survivor," who form clique-like alliances and stab each other in the back whenever they get the chance.

All of which makes actual kids studying at actual performing arts school seem mature by comparison -- even dignified. Imagine that: The kid who knows all the words to "Pippin" is dignified. It only took a sea change in our pop culture -- the one that made it so you and I both know who Kim Kardashian is -- to make fame, as a goal in and of itself, something associated not with ability but with shamelessness. The name of the movie has never been "Talent" -- only now are the two concepts more disparate than ever.

Unlike in the new "Fame" -- which strives with no paucity of effort for street cred with its "Step Up" zazziness and its thumping hip-hop theme song -- kids who hone their craft, who wait nervously in the wings of the theater, who actually bother to be excellent at what they do, are practically old-fashioned.

I contacted the LaGuardia High School and arranged an interview with a few acting students for this piece. I was hoping they'd contribute something that proved they were dedicated to their craft, that they had their eyes on a bigger prize than the flash-in-the-pan kind of stardom that's, evidently, only describable with clichés. But, at the very minute our interview was scheduled, I got a call from one of the teachers: Sorry, they had to cancel, he explained. A big audition was coming up, and they were too busy rehearsing.