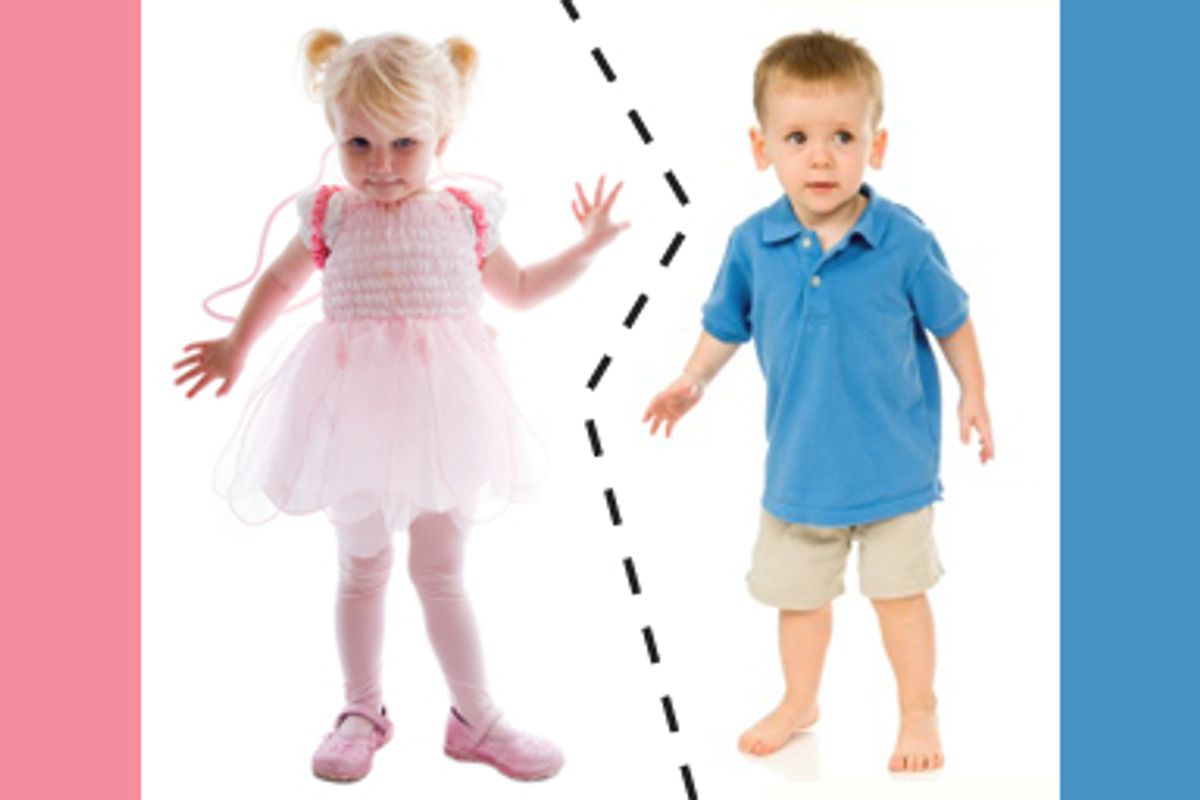 A Swedish couple has refused to reveal the sex of their 2-year-old to anyone -- except those on diaper duty. When word got out about their decision to eschew personal pronouns and sex-appropriate clothing, the parents made international headlines. The mother explained her thinking to the press: "It's cruel to bring a child into the world with a blue or pink stamp on their forehead."

Their approach to gender-neutral parenting may be extreme, but they are hardly alone in hoping their child isn't stuffed into a restrictive gender box. Plenty of parents assiduously avoid pink or blue, defiantly give their sons Easy-Bake ovens and push Tonka trucks on their daughters, hoping to ensure that their children will transcend sex stereotypes and realize their full potential. It all sounds so easy, so evolved, so progressive -- until you find that, by gosh, your son actually digs playing with toy guns and your daughter loves her some Bratz dolls. What then?

Experts like Michael Gurian, a psychologist who penned the book "Nurture the Nature," and Leonard Sax, the author of "Why Gender Matters," have built an educational empire addressing this common parental dilemma. Similar to the progressive ideal of combating stereotypes to allow your child to fully and freely blossom, the biological determinism camp argues that parents should foster the inherent differences between girls and boys. Against the backdrop of an alleged boy crisis in which girls are leaving little lads in the dust academically, these manifestos are offering a research-based alternative to the well-meaning but often futile toy swap.

There's one problem, though: Most of the science underpinning such books is based on studies of adults. Pop science is quick to equate the brain with nature, but the truth is that the mass of billions of nerve cells in our noggins is flexible and changes based on experience. If you truly want to separate nature from nurture -- as much as possible, that is -- you have to look at kids.

Lise Eliot, a neuroscience professor at Rosalind Franklin University, does just that in her new book "Pink Brain, Blue Brain: How Small Differences Grow Into Troublesome Gaps -- and What We Can Do About It." The biologist and mother of three took an exhaustive look at all the research out there -- including not only data demonstrating differences but also the innumerable, lesser-publicized studies that establish striking similarities -- and found just two proven inborn neurological differences. First, boys' brains are bigger than girls' -- to a similar degree that their bodies are bigger. Second, girls' brains stop growing roughly two years before boys' (it's no coincidence they also enter puberty a couple of years earlier).

That isn't to say Eliot believes there are no other innate sex differences -- these are just the only two that have been established. As she maps neurological, physical and behavioral changes from the womb through puberty, Eliot doesn't take sides in the nature-nurture debate -- in fact, most scientists no longer pit the two against each other, she explains -- nor is she concerned with being politically correct. First and foremost, she is a scientist, not an activist. There is a downside to that: The book sometimes veers into dry, academic territory, but just when she starts to lose you, she charms with an anecdote about the way her two boys tussle on the floor or how her daughter shops till she drops -- despite her own aversion to sex stereotypes.

Why are preschoolers so fond of gender stereotypes?

For one thing, that's the way they see everything: black-and-white opposites. It's hard for them to understand subtleties. There's something in our psychological makeup that wants to gender-identify, to figure out and conform to your appropriate role. Young children around the world do this. They reinforce what's appropriate much more than parents do.

After starting school, girls quickly surpass boys when it comes to reading and writing skills. Why do these academic differences so quickly reveal themselves?

Girls, there's no question, talk more to each other even in preschool and toddler years. There are more words exchanged than between two boys. Magnify that over a couple years and you have more girls going to school with more verbal skills. With boys, you see the same thing with spatial skills, throwing things, building things and playing video games. Being aware of these different cognitive domains can help us as parents and teachers provide each child with more of a rounded experience early in life. It's important to not give preschool children too much choice about what activity they do, because then you have kids separating by gender and only reinforcing their strengths.

What do you make of the so-called boy crisis?

I think there is something to the boy crisis. Girls are told, "You can be anything," but when we tell boys that, we don't really mean it. We actually mean, "as long as you're not a preschool teacher, as long as you're not a nurse." As girls move into more and more realms, boys retreat. That's because of the traditional idea that boys need to separate themselves from girls to feel masculine. The only way out of that is just a massive reeducation.

Should parents encourage boys to play with dolls?

Learning to be nurturing is important for everybody. Most people are going to grow up to be parents, whether they're boys or girls, so it's certainly something worth learning. Across cultures, children show a natural tenderness toward infants. It's stronger in girls than boys, but it can and should be cultivated.

Why are boys so drawn to rough-and-tumble play -- is it, as we so often hear, to be blamed on all the testosterone pumping through their bodies?

It's something that is very pronounced in younger boys and gets trained out of them by the teen years. It's not so much pubertal testosterone as it is that boys are prenatally wired up for higher activity levels and rough-and-tumble play. It's probably good preparation for warfare and the kind of physical competition that sets up a status hierarchy in many species. It's something that we may need to be more tolerant and accepting of with young boys. You learn a lot through this kind of play.

Your book was released just as a storm began brewing over South African runner Caster Semenya's "true" sex. What do you make of the situation?

Caster Semenya is psychologically a woman. She has apparently always been treated as a girl and thinks of herself as female, which is why this whole controversy must be extremely difficult for her to assimilate with the whole world watching. She could be suffering from any of a number of intersex conditions but was apparently unaware anything was amiss until she suddenly appeared in the World Championship in Berlin.

Unfortunately, sports are one arena where men and women don't compete against each other, so this leaves Caster in the lurch, if further testing reveals she is physiologically too masculine to qualify. Compared to physical and athletic traits, the difference between men and women in most mental and emotional traits is much smaller and also more influenced by social learning. So if Caster was raised as a girl and thinks of herself as a girl, she's a girl. Even fully genetic males can be raised as girls under certain medical conditions -- severe congenital malformation of the lower torso, for example -- and be quite content with their gender identity.

We've been talking about sex differences after birth -- but what about in the womb?

There's no question that some basic traits, like sex drive, are affected by prenatal testosterone. In people, our best evidence comes from various intersex children. The best studies are of congenital adrenal hyperplasiain girls who are exposed to various male hormones before birth. Many aspects of their behavior have been studied later in life and their play behavior is noticeably masculinized. The other thing that's noticeably shifted is sexual orientation.

Cognitive skills have been looked at extensively, and there doesn't appear to be any effect of prenatal testosterone on thinking ability. It might improve spatial skills, but the data is not that strong. There is definitely a difference in maturation and growth rate. Boy fetuses actually grow a bit faster, which is why they're larger on average at birth. At the same time, by many measures, they appear two or three weeks less physiologically mature. Boys born preterm are much more vulnerable than girls.

That goes against our stereotype of boys, doesn't it?

It's very much the reverse of what we expect. With this developmental immaturity comes irritability. Probably the clearest difference between newborns is that boys tend to be fussier.

Is it true that, as we often hear, females are the default sex?

That's pretty much true, although it ignores the active mechanisms that go on in creating a female. If the only thing that's missing is testosterone, then you get what looks like a pretty normal female. But it's complicated, because women with Turner's syndrome, who only have one X chromosome, have a bit lower levels of estrogen, which has various effects on their bodies and cognitive skills. There's more going on in making a female than the absence of testosterone.

Many of us have heard stories of botched circumcisions where boys are reassigned as girls. Do those cases reveal anything about the impact of nature versus nurture?

In one case recently reported in the medical literature, a boy suffered a circumcision accident at two months and was reassigned. She grew up with a solid female identity, although certain aspects of her behavior were masculinized -- for example, she reported having sexual experiences with both men and women. Gender identity is very much influenced by the sex in which one is reared. If your parents call you a girl and raise you as a girl, that's going to have a big impact.

There's another class of boys who have congenital malformations affecting the whole lower abdomen. Traditionally, many of these boys were raised as girls. At least half remain happy with their female identity. It's not nature or nurture. It's really both -- even with something as fundamental as gender identity. It is biased by prenatal hormones but not fully expressed until after social rearing.

In the book you say that circumcision might skew the results of studies meant to uncover innate behavioral differences between boys and girls. Can you explain that?

It's a really important control when you do any kind of behavior comparison. You can imagine it's a very, very painful experience. Even now that we know so much more about newborn perception, many doctors still do circumcisions without anesthetic. That's going to add to this irritability factor with boy babies.

So, that said, what do we know about behavioral differences shortly after birth?

That's another perfect example of how it's both nature and nurture. In the first year of life, you don't really see a strong difference. Both boy and girl infants like dolls, but at the first birthday you start to see boys gravitate away from the dolls and toward the trucks and balls. Three-year-old girls show a strong preference for dolls over toy trucks. By 5, they have an equal interest in trucks and dolls. What you see is that, at least in our modern society where girls see a broader range of role models or behaviors that are considered feminine, they open up and allow themselves to play with the trains, trucks and Legos.

When it comes to toy preference, you see some of the biggest differences in the ways parents respond when their kid picks up the "wrong" toy -- especially when a boy picks up a girl toy. Children internalize that. They know darn well what mom and dad think about the toy they're playing with. There is an initial biological bias toward these different toys, but then it's very strongly reinforced socially. Studies show peers have a shaping influence. Certainly by age 3, children will pick the socially appropriate toy.