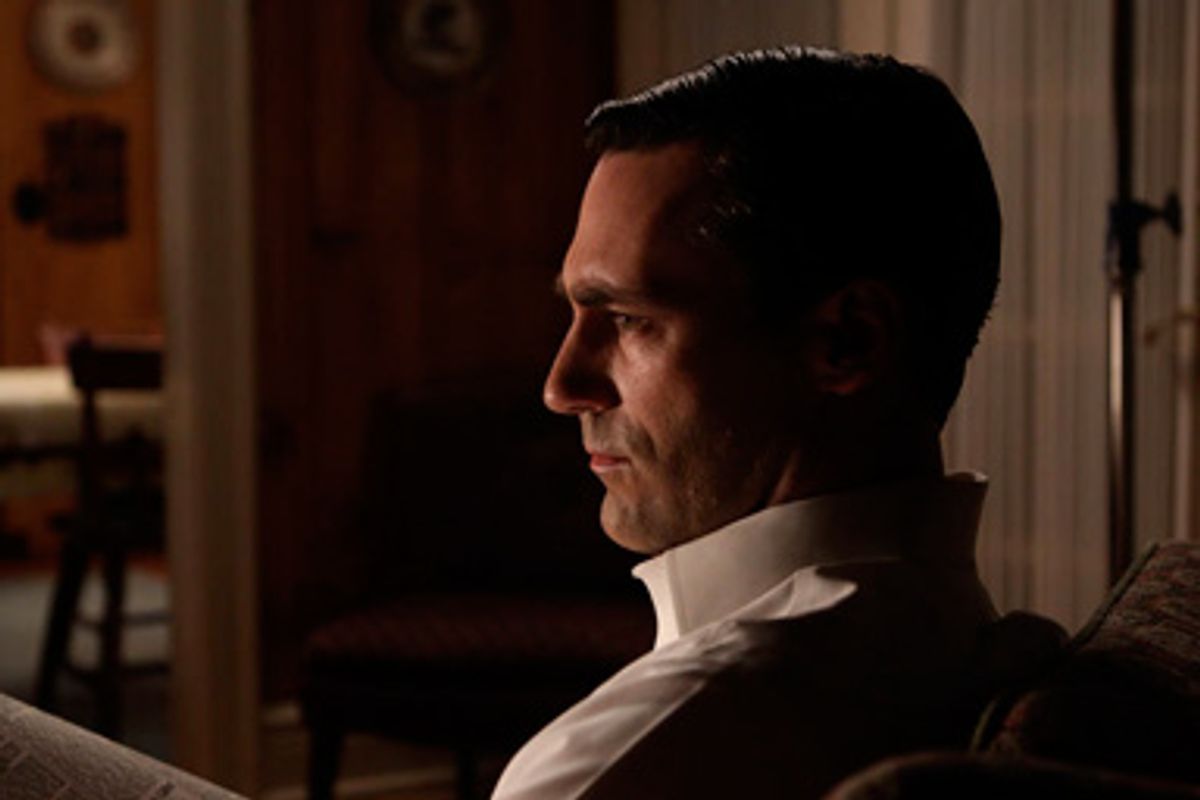 Ah, how the mood of "Mad Men" shifts so quickly! But can't the same be said for the mood of American life? One minute we're doing the Lucky Lindy, the next minute, we're waiting on bread lines and heating up leftover stone soup. One minute we're thinking our old LaSalle runs great, the next we're waiting on gas lines and hoping that the USSR doesn't blow us to smithereens. One minute we're investigating an all-raw, organic diet and calculating the value of our dot-com stock options in our heads, the next we're scarfing down Big Macs, waiting to default on our interest-only mortgages.

So what could be more fitting, at this time of extreme economic and cultural turmoil, than a bleaker-than-ever third season of "Mad Men" (10 p.m. Sundays on AMC)? Sure, it all started out with high times, cold martinis, hot girls, witty quips, sneaky affairs, and slow, smoldering mysteries. Who is this Don Draper cat? We asked ourselves, but we hardly cared about the answer. After all, look at how Betty's (January Jones) marvelous dress matches her patent leather shoes exactly! Look how these dapper young fellas all chain smoke and toss back bourbon in their offices! With lives this fabulous, who cares if your stupid marriage is falling apart or not?

Sounds just like the way we felt about tech stocks and Botox and real estate and every other slice of American pie that we just had to get while it was hot, hot, hot, doesn't it? This is what "Mad Men" is best at, after all: capturing a mood, and making all of the little worker bees and homemakers and children in its picture reflect that mood in their own way.

So if Don ends up bamboozled by nefarious strangers and blackmailed by his boss, or if dashing young British manager Guy Mackendrick only spends a few hours at Sterling Cooper before his foot is chopped to bits by a riding mower, is that really all that unbelievable? Even if these plot twists border on the fantastical, doesn't our collective suspension of disbelief surrounding the stock market sort of seem fantastical in retrospect, too? As Americans, it's our cultural prerogative to leap before we look, whether it comes to careers, marriages, investments, drugs, wars, politicians or tell-all books. Matthew Weiner beautifully illustrates the unnerving invasiveness of modern, postwar culture, the ways that empty trends and bad ideas and innocuous shifts in personal taste seem to join together, gather momentum, and crash down upon the populace like a sociocultural tsunami. At the moment when you think the boom times will never end and you'll live out the balance of your days on Easy Street, half of your personal nest egg disappears, you lose your job, you're uninsured, and before you know it, you're nearing bankruptcy. That's not just a cautionary tale. Here in America, from pauper to entrepreneurial prince, your dreams can come true (Conrad Hilton, anyone?), but your worst nightmares can come true, too.

It makes perfect sense that, when most Americans are preoccupied with safety nets -- healthcare reform, banking regulation, real estate reform -- "Mad Men" should lay bare an old (but still thriving) American perception that expecting protection from a personal disaster by your employer or your government is flatly wrong, and evil and un-American to boot. When Guy Mackendrick strides into Sterling Cooper, all sunshine and optimism, at the start of the day, only to be lying in a hospital bed with no foot, no job, no disability and no recourse at the day's end? It isn't just a haunting glimpse at the harsh realities of the workplace in the early '60s, it's a fitting parable for the ways that Americans are still left high and dry by a social welfare system that doesn't work, but that still tries to make comforting sounds about keeping its citizens safe from ruin. "The doctors said he'll never golf again," one of Mackendrick's bosses says with a shake of his head. As absurd as this remark is, the dark humor is utterly in step with "Mad Men's" barbarous take on the tenor of the times.

While "Mad Men" is undeniably darker this season, clearly Weiner is setting the stage for the humanist movement of the late '60s. Why do Betty and Don (Jon Hamm) bark at their kids to "shut up" and "cut it out" and "go play" in every other scene? Sure, it's kind of funny. But we're also witnessing the groundwork being laid for the impending cultural revolution. When Don's daughter, Sally (Kiernan Shipka), wakes up and spots that Barbie doll that her mother gave her on her dresser, she's not just afraid of her grandfather's ghost. The doll and Sally's response to it foreshadow the growing gap between Sally and her mother, between Don Draper's generation and the next. The charming but cold-hearted grifters in Sunday's episode made it clear that, despite Don's ability to relate to this younger, freewheeling generation, a hard rain's gonna fall on him as well.

Paul Kinsey (Michael Gladis) and the younger guys in the office also hinted at the generation gap when they laid around all weekend, smoking pot and musing aimlessly instead of making steady progress on their ad campaign. Peggy (Elisabeth Moss) might be gaining confidence in her newly empowered path as single career woman, but her naive nature and neediness persist, as demonstrated by her unexpected affair with Duck Phillips (Mark Moses). Despite her relatively traditional choices and her sophisticated understanding of people, Joan (Christina Hendricks) looks doomed to be relegated to a role of caretaker of lost boys. As always, Betty wavers between independence and a retreat into the comforting and occasionally dismaying folds of domestic life. Weiner does a remarkable job of translating social sea change into rich, believable, flawed characters, straining to right themselves before the next big wave hits.

"You see? It's all right. This is your little brother. He's only a baby," Don tells Sally after she confesses that the boy scares her. "We don't know who he is yet or who he's going to be, and that's a wonderful thing." Just because Gene is named after his grandfather, that doesn't mean he's the same person, not by a long shot. He may grow up to be the opposite of his grandfather. Likewise, he may question every choice his parents ever made, and despise everything they ever stood for.

Isn't that the American dream, after all? We like to see ourselves as independent, headstrong, deeply unique individuals, paving our own paths through the wilds of contemporary life. We so easily forget that almost every decision we make, from whether or not we breast-feed our babies, work overtime, sleep more than six hours a night, exercise, visit the doctor, vote, do drugs, drink, stay married, all of it, springs from the common, accepted attitudes of the times. The beliefs we hold most sacred, the ideas that define our identities, more often than not boil down to trends. It might take a few decades, but one day we inevitably wake up and notice that a big percentage of the individuals in our demographic were also smoking, dabbling in Buddhism, using formula, spanking their kids with a wooden spoon, getting divorced in middle age, reading Dr. Spock, becoming vegan, you name it. The very choices that feel fundamental to us are the ones that look almost hilariously clichéd and goofy in retrospect.

"Mad Men's" tendency to lean in to the almost surreal inhumanity of modern times, its thirst for savagery in mundane settings, are exactly what make it worth watching. Absurdity, extreme story lines, that flippant tone -- the very aspects of this show that some critics are starting to question -- are essential to a drama series that's primarily concerned with capturing the sociocultural flux of an era. Even as we gawk and gasp at the depravity and outrageousness that unfolds before us each week, we foreshadow the gawking and gasping our children will do when the 18th season of "Mad Men" depicts attachment parenting, Botox, life coaches, organic farms, reality TV, white wine spritzers, 3-car garages, spray tans and doggie day care.

"People actually got sick and went bankrupt because they didn't have publicly funded health care back then? How is that even possible?" they'll say.